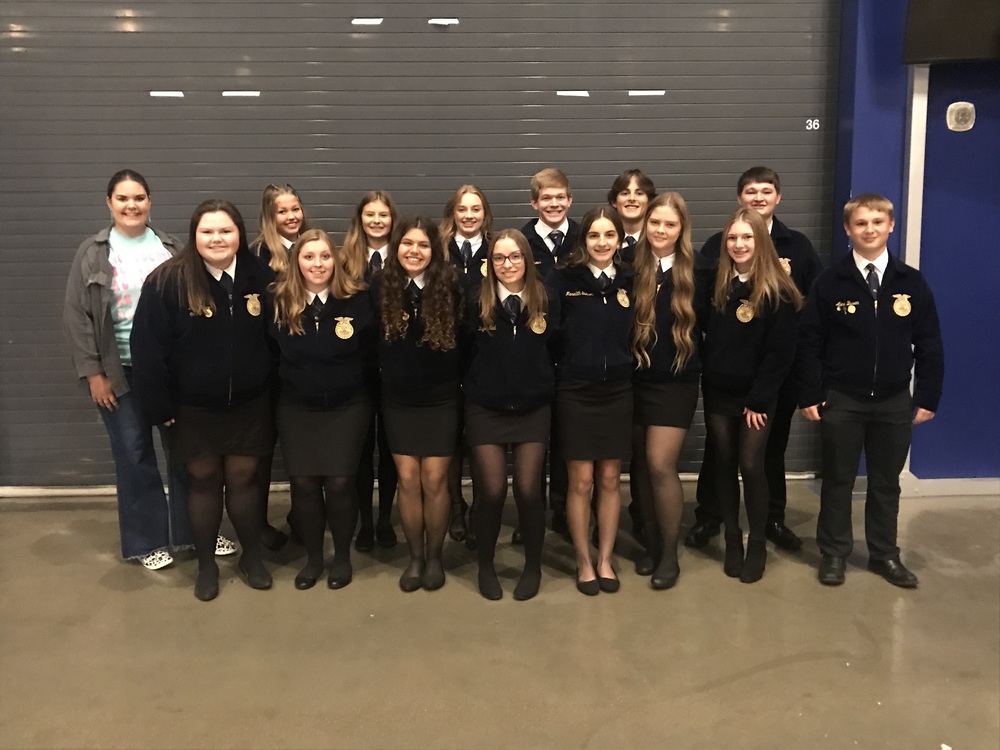 Three Clermont Northeastern High School students experienced the 2022 FFA National Convention with fresh eyes, though all had attended the event in prior years.

Juniors Braydin Pride, Will Mathews and Rylie Pence were among the delegation of 18 (14 students, and four adults, including agricultural education teacher Faith Stegbauer) who traveled to the Indianapolis area Oct. 26-29 for the annual event. “Area” is the appropriate term, because the group actually stayed in Lebanon, Indiana, 32 miles northwest of Downtown, and rode the bus from the hotel to Lucas Oil Stadium every morning.

Getting up early turned out to be an eye-opening experience, in multiple ways, and members of the group plan to use the knowledge gained to grow CNE’s FFA chapter. (FFA is the group formerly known as Future Farmers of America, but for the last 34 years has gone by simply FFA).

Mathews is the chapter president and Pride the chapter treasurer; the convention inspired both.

“We did a lot more things than we’ve ever done before. We learned a lot of stuff and it kind of showed us what we can do, kind of starting over, where we can go,” Pride said. “We got a lot of ideas that we’re interested in doing and trying to start here. Just kind of got a lot more motivation behind what we want to do.”

One of those ideas, Mathews said, is pursuing FFA state degrees for members. According to the state FFA website – ohioffa.org – “The State FFA Degree is the second highest level that can be achieved as an FFA member. This step in the FFA Degree system encourages students to grow and achieve personally toward establishing themselves in an agricultural career.”

National degrees are the next step after state degrees, and require the latter.

Pence said she was moved by the addresses from retiring FFA members. “I got to see how much these people truly cared about FFA and how it changed their lives,” she said.

While most of the events were in and around Lucas Oil Stadium, there were side trips. The CNE group toured Fair Oaks Farm, an 80-mile drive from Lebanon, to view the dairy and hog operation, as well as Tuttle Orchards in Greenfield, where they saw cider being made.

“That isn’t a big part of agriculture where we live, so it was kind of cool to see that,” Mathews said.

Stegbauer, in her first year at CNE, is a relative veteran of FFA conventions, having attended them as a student at Fayetteville Perry High School. She is a 2022 graduate of Morehead State University. She said the event has changed over the years, from how they present proficiency awards to the number of exhibitors and vendors at the expo.

She said she hopes her students discovered the wide variety of agricultural careers as well as gained an understanding of how technology is changing the day-to-day operations of the industry.

Each of the three students plans to be involved in agriculture, at some level, after high school. Pride said he will likely help at his dad’s grain farm; Mathews wants to go into excavation and clearing, and keep cows on the side; Pence hopes to be a large animal veterinarian.

CNE chapter members competed in the FFA sub-district parliamentary procedure contest earlier this month and will attend a leadership night at Talawanda High School in Oxford Nov. 29. They participate in those events with renewed purpose instilled at the convention.

“You can really flip things around if you just put your mind to it,” Pride said.

“I'm really excited to see where we go as a chapter,” Pence said. “Going there really put the goals into our head. There are so many things we can do. And we just have to do it,” Pence said.