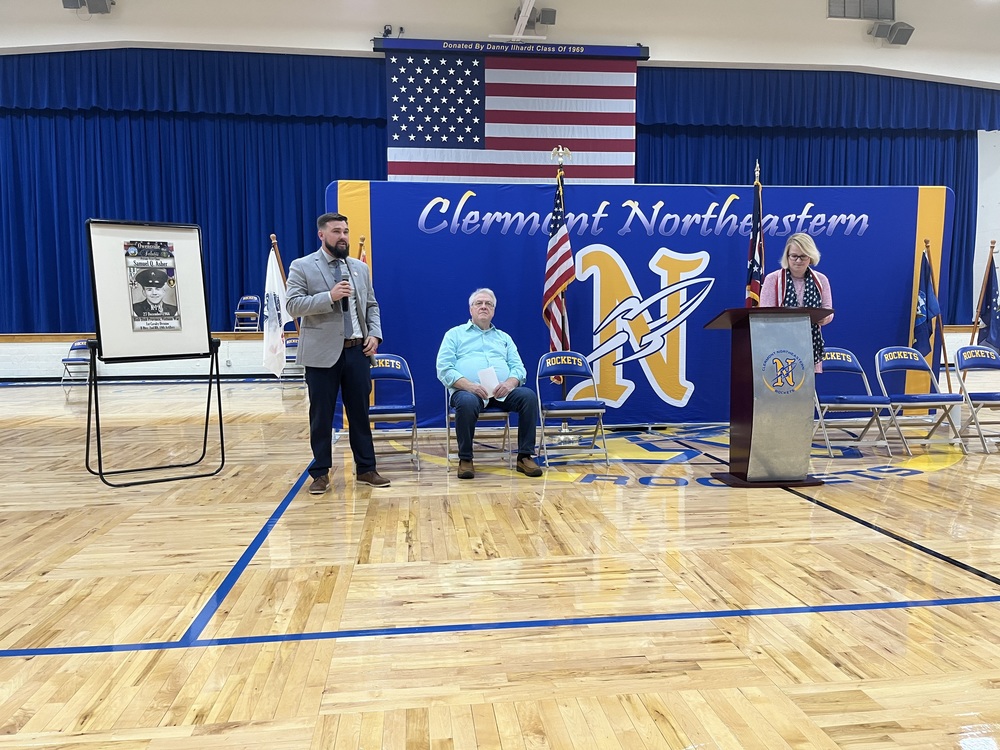 They walked the hallways of Clermont Northeastern High School more than 40 years apart, then took similar paths after school. Nov. 11, they returned to share their message – lives shaped by encounters at their alma mater.

That moment for Kozloski came during his senior year. He was, by his own admission, someone who “really did not care about school.” He just wanted to play sports and hang out with friends, and was constantly in trouble – often for playing hacky sack in the hallways. He studied diesel mechanics in the Great Oaks system as a senior, when he saw a Marine come in wearing his dress blues.

“I was just like, ‘What is that?’” I want to be like that guy.” The Marine advised Kozloski to visit his local recruiting station. That afternoon, at football practice, Kozloski ran across Steve Thompson. Now the school’s head football coach and coordinator of the Veterans Day programs, Thompson at the time was the running backs coach. He is also a former Marine and Purple Heart recipient who served in Iraq, and someone to whom Kozloski said he had spoken “maybe six words to.”

Kozloski noticed a Marine Corps tattoo on the back of Thompson’s leg and asked him if he was in the Marine Corps.

“He just lost his mind,” Kozloski recalls of Thompson’s reaction. The second encounter in one day convinced Kosloski. “This is something way bigger than I could ever imagine. I had to get into this.” He drove to the recruiting station in Eastgate after practice and enlisted. That spring, after graduation, he went to the Marine Corps Recruit Depot at Parris Island, South Carolina.

“They tear you down, they rebuild you. You come out a completely different person,” he said.

He was deployed to the Middle East, off the coast of Libya, and served “all over the Mediterranean,” before returning to the U.S., where he was promoted to a team leader. Kosloski went back to Eastern Europe to help train forces for situations like the current one in Ukraine. After considering, but being talked out of, joining Special Forces, Kozloski became a lookout sniper and then an instructor, which is how he concluded his career with the rank of staff sergeant.

The 31-year-old lives in Batavia and heads the sewer division for Jolly Plumbing, but remembers where his life turned, and wants today’s students to have that same opportunity.

“Just appreciate where you're at and where you could go in life, and just always recognize that you start from somewhere, and for me, the military was able to guide me into the correct path, to be a productive citizen of society,” he said.

Cliff Riley was making, he said, one his last public appearances. Now 76, he served with the First Brigade, 69th Battalion, 593rd Company. He is a 2018 Ohio Veterans Hall of Fame inductee, was recognized by the United States Congress and Ohio for 50 years of veterans advocacy, named a Vietnam Veteran of the Year for Ohio, was Ohio president of the Vietnam Veterans of America and instrumental in the establishment of the veterans home in Georgetown.

None of those seemed possible during his freshman year at CNE. “I was the least likely person to succeed,” the Milford resident said. Riley was a freshman for two years – he was held back as his friends got promoted. He worked jobs in Owensville, including at the Sohio station in town. His “moment” came during his junior year.

“One day I come to school, down this hallway, there's some kind of commotion going on,” Riley said. He made his way toward the front of the crowd and learned that one of the bigger students – a bully, as Riley described him - had knocked another student’s books out of his hands, to the floor, and then grinded his foot into the papers as the panicked student tried to collect them.

“I lost my brain in that moment, and I went after him like a buzzsaw,” Riley said.

That student, whom Riley befriended, was Samuel Q. Asher, who later became Pvt. 1st Class Samuel Q. Asher. Both would join the Army and be deployed to Vietnam on the same day – Dec. 7, 1966. Twenty days later, Asher was killed in battle – one of 27 casualties when the Vietnamese attacked Firebase Bird.

“When I found out what had happened, I was destroyed,” Riley said.

Those incidents with Asher – from the time he was bullied in the hallway, through his death as well as his own struggles during his youth (he was in at least 25 foster homes, in some of Cincinnati’s worst neighborhoods, with the stab wounds and broken bones as a reminder) – motivated Riley to become an advocate for those who couldn’t stand up for themselves.

Riley wrote a note to Asher’s mother, telling her how much he appreciated and loved Samuel. Riley was hoping to meet her when Union Township dedicated its Veterans Memorial in 1992 – he was emcee at the ceremony – but none of Asher’s family members could be located, so Riley accepted the flag on his behalf.

The messages he wanted to leave with CNE students:

Second, “If you see somebody bullying somebody, step up. Say this is not acceptable.”