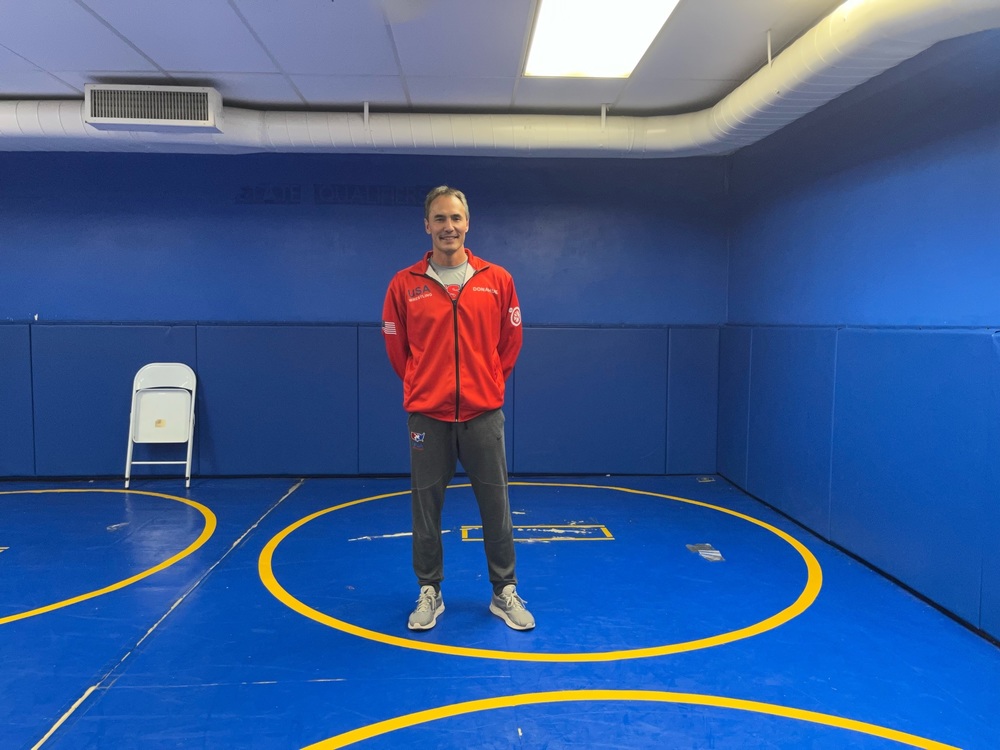 The wrestling community is both close-knit and worldwide. Tom Donahue can attest to both.

Donahue, 49, competed in the United World Wrestling Veterans Championships in Plovdiv, Bulgaria, in early October, winning the 70-kilogram weight class. The gold medal followed a bronze medal in the same event in 2021, that time in Loutraki, Greece.

The Bethel resident is the new girls wrestling coach at Clermont Northeastern High School; taking over the program to help Scott Wells, who had been coaching both the boys and girls. Donahue spent 15 years at Bethel-Tate High School, earning Southwest Ohio Coach of the Year honors six times and Southern Buckeye Athletic and Academic Conference Coach of the Year four times. His youngest daughter is a freshman at CNE, taking advantage of the district’s open enrollment.

“We had many options when deciding where to send Janelle to high school,” Donahue said. “The academic and athletic programs and the overall culture at CNE told us that this would be a great fit for her. We're both extremely grateful to be a part of the Rocket family.”

Wrestling is a lifelong passion for Donahue – one from which he briefly strayed in college, but now has taken him across the globe. He previously competed in UWW World Championships in Tbilisi, Georgia, and Skopje, Macedonia. Competitors do not have to qualify through other tournaments – they can enter the world championships directly, but the competition is fierce with several former and current senior level athletes still competing.

Trips are expensive – Donahue saves money throughout the year. He is owner/business manager at Bethel Community Pet Hospital. Travel is exhausting.

“Thirty-six hours of travel to get there. So that was kind of tough. I left Saturday at 11 o'clock in the morning, didn't get checked into the hotel until 1:30 a.m. (Bulgaria time) Monday morning,” Donahue said. “I had two days to work out to get acclimated and then I wrestled on Wednesday and then I flew back on Saturday, got home on Sunday, so I had really two days to go sightseeing and hanging out watching other guys wrestle.”

It all paid off when Donahue won, 3-0 over Germany’s Michele Rauhut – his fifth match of the day.

“It was pretty phenomenal because … as the clock ticked down, the United States contingent up in the stands, they all went crazy,” Donahue said. “At the end of the match we shake hands and I went to my coaches in the corner and they gave me the flag to put around my shoulders and take a lap around the mat. That was pretty amazing.” Donahue said he knew he was winning – wrestlers tend to keep a running score in their head during matches, so strategically he knew to take less risk in the waning moments.

Donahue is a native of Belleair, Ohio, and a graduate of St. John’s Central High School. He was a two-time state qualifier in high school, placing third in 1989, and was a member of the school's state champion 4-by-800-meter relay team in 1991. During his senior season, injuries, including a separated shoulder suffered playing football, limited his effectiveness on the mat, and he just missed a third trip to state despite finishing the season 26-6.

He put his wrestling career on hiatus to pursue another sport at the University of Cincinnati.

“I was pretty much burnt out … done with the sport at that point. Baseball was always my first love so that's why I decided to come down and I try my hand at UC. Pitched there for about a year-and-a half, making the team as a preferred walk-on and then started running out of money. So had to get a job, get to work. So that kind of pushed baseball to the side.”

He met his wife, Trinket, at UC – both majored in biology and pre-medicine. She is a veterinarian and graduate of Blanchester High School. In 2007, Donahue learned that Bethel-Tate needed a wrestling coach, and he returned to the sport, leading not only the Tigers, but also Ohio’s Junior National Team for five years.

During that time, he discovered that he could still hold his own against some of the top high school wrestlers, which reignited his competitive spark. He entered tournaments in England and the National Masters U.S. Open in Las Vegas in 2018, winning his weight class. A few current USA Veterans World Team members and coaches at the time then encouraged him to compete in the World Championships.

Winning is one goal, setting an example is another.

“The reason why I really got into this was to inspire my kids,” he said. Two of his daughters were state placers at Bethel-Tate. “But also the kids that I coach to show that the stuff that I preached to them works … basically to model the way from what they eat, their nutrition, and how much rest and hydration they get, to how you attack practices and the mindset you have to improve and … if you follow our lead, these are the type of results that you can get.”

Those types of shared experiences bind wrestlers, regardless of ability, age or nationality.

“I think everybody knows how hard this sport is and what it takes to commit to be good,” Donahue said. “I played a lot of different sports and wrestling was not my favorite growing up. But I think it's one that teaches you the most and I think it's the one that you have to commit to the most. It takes a ton of courage to step out on that mat by yourself and anyone, regardless of age, that puts their foot on that line deserves a lot of respect. I think that knowing what everybody else has to put into it, that kind of unites the wrestling community.”

CNE wrestlers should benefit from Donahue’s presence – and he from theirs, on the mat and off.

“I have a ton of respect for coach Wells and what he's done with the kids in his wrestling program, both on and off the mat. I know that he and I share the same coaching philosophy that our main job is to help develop the individual as a person and not just a wrestler.”