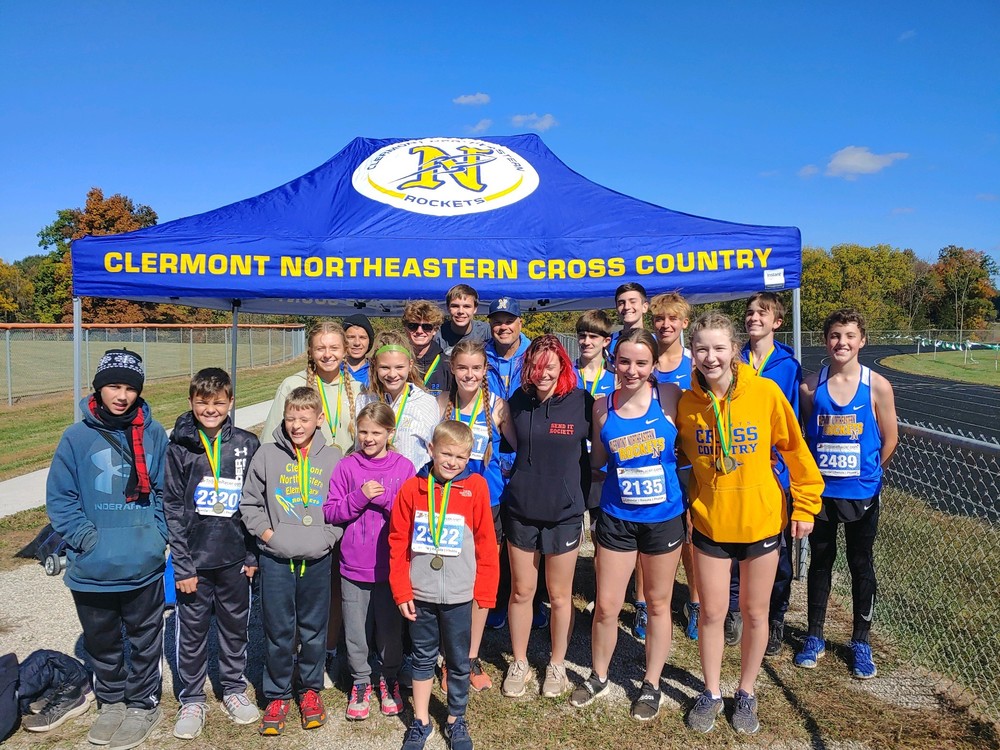 ​In the long run, Rockets have become SBAAC power

In the long run, Rockets have become SBAAC power

Their objectives are pretty simple.

That’s how Clermont Northeastern High School cross country coach Moe Cooper describes his program. This season, the Rockets have fulfilled those goals, and then some.

CNE’s boys won the CNE National Division championships at last weekend’s Southern Buckeye Athletic and Academic Conference meet at Wilmington College, and the girls placed second. The title is a repeat for the boys.

This is Cooper’s ninth year leading the program. The 1988 CNE graduate took over after the previous coach resigned and the roster had dwindled to three runners. In his first year, there were five runners at the high school level and a couple more in the middle school. In seasons since, there have been as many as 35 in the program; this year there are 24 - 16 at the high school.

“We were the team that just kind of was irrelevant. We just competed and we never did things five years ago,” Cooper said. “Last year we had two runners go to state (then-senior Summit Northrup, now running at Northern Kentucky University, and current senior Noah Bunting).” He noted that until recently, CNE was unable to enter a full girls team at league or district competitions.

Cooper built the program by stressing involvement. “You’ve got to start them young. You got to get people involved. Some people stick with it, and some don't, but we've been fortunate that we've had people that have stayed with it and got much better. We lost a bunch of seniors last year and we're just reloading this year,” he said.

Bunting is the pacesetter for the boys. He has a season’s-best time of 16 minutes, 48 seconds (5K), and has won every race in which he has competed in 2022, including the overall SBAAC title. Junior Luke Hauserman, a transfer from Bethel-Tate, has been the No. 2 runner. Hauserman is ineligible for Ohio High School Athletic Association postseason competition. Junior Matthew Crawford and freshman Jackson Crawford give CNE a strong lead pack of four.

Crawford is running his best times of the season after being slowed by injury earlier. He has a season-best time of 17:31, set at the West Union Invitational Oct. 8.

“I think we've done pretty good. We're looking to win league again this year. And so far, I think we've won every meet so far,” Crawford said. “My first meet I didn't do very good because I was coming off an ankle sprain. I was still recovering from it. But now I'm doing really good. I've knocked off like three minutes since that first meet.”

CNE’s boys won five of six regular-season meets, and placed second in the other.

The girls team has two second-place finishes and one third-place in six meets. “And that was a number we never had,” Cooper said. “Until four years ago we never even took a women’s team to league or district.”

“I think everyone’s slowly been progressing more and more,” Sullivan said. “I think we’ve each reached the goals that we had for one season.”

Five members of the girls team – Breitenstein, Carlier, Langdon, Matthews and Patterson, and six members of the boys team – Bunting, Matthew Crawford, Jackson Crawford, Hauserman, and juniors Pete Schuler and Nick Studer – recorded their season-best times at West Union, a good sign a week ahead of the SBAAC meet and two weeks ahead of the district meets Oct. 22 at Voice of America Park in West Chester Township. CNE’s boys compete in Division II and the girls in Division III.

Singular focus will be the key.

“Just kind of run. I usually look to improve my placement. I don’t really look for anyone else,” Matthew Crawford said.

“I’m excited to see how we do,” Sullivan said. “I am too,” Breitenstein agreed.