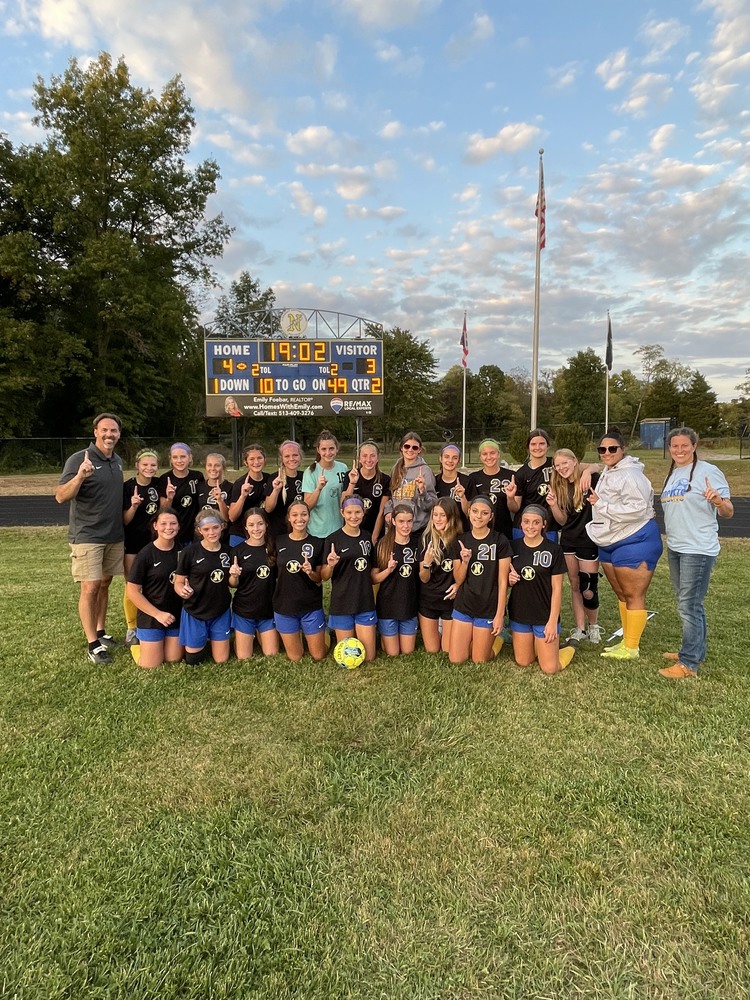 Clermont Northeastern High School girls soccer coach Craig Yeager was sitting next to Madeira coach Dan Brady at the Southwest District sectional draw Oct. 9, watching as team after team chose a spot in one of the eight brackets that comprise the Division III tournament.

The Rockets, 11-1-1 at the time, were seeded fifth, and Yeager had selected his first-round spot. Then, 11 more teams made their choice, and none went opposite CNE, until Southern Buckeye Athletic and Academic Conference rival Felicity-Franklin took on the challenge. CNE defeated the Cardinals twice during the regular season, 3-0 and 8-0. The postseason meeting is Tuesday, Oct. 18, at CNE.

The message was clear – most teams wanted to avoid the Rockets.

“Twelve other teams did not want to touch us,” Yeager said. “I was kind of chuckling with Madeira’s head coach, who I know pretty well and sit next to normally at the draws and he said, ‘Nobody wants to play you know.’ I said, ‘I know.’”

That’s what happens when you dominate a league, as CNE has the SBAAC National Division in 2022. The Rockets lost only twice during the regular season – Aug. 20 at Western Brown 3-1, and Oct. 10 at Lynchburg Clay 3-1 (they also played to a scoreless draw vs. Bethel-Tate Oct. 4).

CNE outscored opponents 54-11 – six of the 11 goals allowed came in the final week of the season, in a 4-3 win over Williamsburg that clinched the division title, and the Lynchburg Clay loss four days later. Yeager referred to that game as a “hangover” from the win over Williamsburg.

“I think as a team, we were maybe a little tired still, but a little bit of a letdown, kind of a flat game, if you will,” he said.

How good has the defense played? In 10 games between the loss to Western Brown and the win vs. Williamsburg, opponents scored only one goal, that by Bethel-Tate Sept. 6 in a 7-1 CNE win.

With five seniors returning from 2021’s 10-6-1 squad, Yeager was confident his team would have a good season. The 3-0 win at Williamsburg Sept. 8 validated his expectations; the Wildcats won the National Division last season.

“I was a little worried going into there. We went there last year and just whipped them pretty good and I knew they would be out for blood because we beat them so badly the last time and even though we only beat them 4-1 score wise, we beat … them all over the field,” Yeager said.

During that game, CNE held then-junior Kaitlyn Gregory scoreless. Gregory led the SBAAC in scoring last season with 83 points (37 goals and nine assists) and again in 2022, with 38 and 9.

The Rockets have offensive firepower of their own. Senior Anna Best ranked fourth in the SBAAC with 28 goals and nine assists (65 points). She has scored four goals in a game three times.

“I've found that I get multiple players guarding me at one time, which to me is a good thing because that means that somebody else is open,” Best said. Often, that’s sophomore Aubrey Rack, the second-leading scorer with 12 goals and 13 assists (37 points).

“They're both very dangerous. They work well together and then pop in and out to the outside. They're both there for the crosses as well,” Yeager said.

Junior midfielder and defender Jesse Foebar said togetherness is a vital part of the team’s success.

“We work together very well. We're all really close in school. So I think that's really helped us as a team like be motivated and stay focused,” Foebar, who placed third in the state in her weight class in the wrestling, said. “And I think that we've really benefited from that this year. No one really has any issues on the team. We're all very, very close. Makes it very easy for us to dominate on the field.”

Senior Jasmine King is an inspirational leader on the team. She tore the MCL in her right knee and fractured her tibia over the summer, said she didn’t expect to play at all this season, but has three goals and four assists (10 points).

“I did have to have a brace on for most of the season and I think it really made me slow and I know that I wasn't playing to my full potential because I’d get really scared and like timid going up against the ball, but (since) I've taken off my brace I've gotten a lot more confident.”

Confidence is contagious, and the Rockets were looking forward to proving themselves in the postseason. A win over Felicity would me a second-round match against Oct. 22 at No. 3 seed Mariemont (6-5-4 at time of the draw), and a likely sectional finals showdown against No. 4 Reading (9-4-1) Oct. 25 at Madeira.

“We've been trying to get a hold of Reading all year,” Yeager said. The players know what they have to do.

“Staying really focused in practice and during our warmups really set the tone for how we're going to play during our games,” Foebar said.

“I think we all need to give our 100 percent and that goes along with communication and really building each other up, pumping each other up during the game, before the game being serious at practice,” King said.

Clermont Northeastern advanced to the sectional finals in 2020, defeating Blanchester and Deer Park before losing at Mariemont. Last season the Rockets were 1-1 in the postseason, defeating Fayetteville Perry 3-0 and losing at Madeira 7-0.