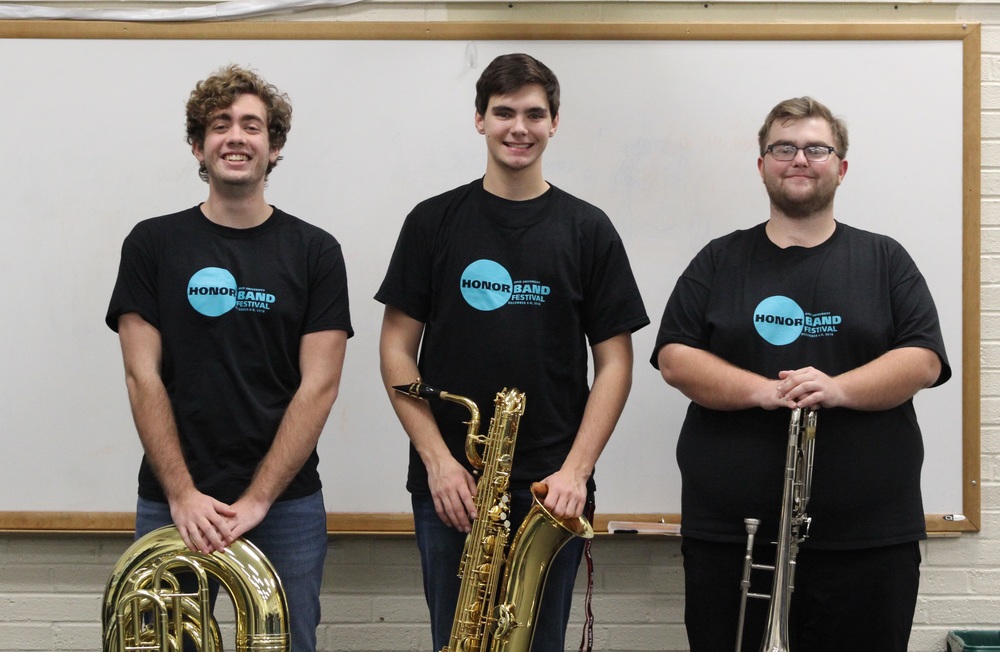 Noah Curran, Sam Wood and Gabe Beebe laugh at the question. The three Clermont Northeastern High School seniors are sitting at a table in the conference room in the school’s main office complex, talking about their experience as members of the Ohio University Honor Band. The interviewer asks them to complete this sentence: “Honor band members are cool because ….?”

“Cool because we work harder,” Wood decided. He and Beebe are two-time members of the OU Honor Band, which rehearsed and played a concert at the Athens campus Dec. 6 through Dec. 8.

“We got to go off and experience something new that not a lot of people get to. It’s a fun challenge that not everybody would be good enough to handle, but within the challenge there’s also getting to have the experience, you know,” Beebe said.

This was Curran’s first year as an Honor Band member. His response was similar to Beebe’s.

“I get to meet so many good players who are better than me. It’s fun getting to meet people who have the same passion,” Curran said.

“It was really neat to see these students take the initiative to audition to be a part of this group. It’s a great experience,” CNE band director Chris Moore said. “I was a member of the first two Ohio University Honor Bands in 1996 and 1997. I had a great time there playing with the best players from other bands around the state and it helped guide me to choose to attend Ohio University.

“Both of the kids that auditioned last year returned this year as well because they had a good time. It’s a lot of hard work, you basically spend the entire weekend learning to play collegiate level music that they perform on a concert on Sunday.  Hopefully we will continue to have students audition in the future.”

Prospective members of the OU Honor Band send in an audition video, each performing lyrical and technical pieces for their specific instrument. Curran plays trombone, Wood plays tuba and Beebe plays saxophone (the baritone saxophone for the audition video). For each, their current instrument was not their first choice.

Curran was in the sixth-grade when he started playing trombone.

“I was going to play trumpet, but my mom clicked the wrong thing on the ordering web site, so I’ve been stuck on trombone and it’s gone far,” he said. Curran also plays trumpet, piano and saxophone (“a little bit”).

Wood has played tuba for five years, and also plays saxophone and guitar.

“Well, originally I wasn’t supposed to play tuba. I played saxophone and I marched in one parade, and then we didn’t have a sousaphone player for our band, and my cousin played sousaphone and he kind of drug me into it and that’s why I’ve played tuba for five years, six years,” he said.

Beebe had planned to be a percussionist, “but my parents were like, ‘Hey, we have this saxophone so if you can play that because we have it already. And it’s jazzy. You can pick up the ladies playing jazz,’ so I was, ‘OK’ since we already had it.”

He also plays alto and tenor saxophone as well as piano, and even makes some of his own instruments.

“I have a clarinet in my house that I play on whenever I get bored. I’ve had an accordion for a couple of years that I play on,” Beebe said.

“All of the drumline stuff at basketball games and I went to Indianapolis with the drumline last month at the international convention and we played in a competition, so I play anything you need me to,” Beebe continued.

The honor band experience is both exhilarating and exhausting.

“Staying out until 12 o’clock with these kids in the town and then the challenge is having to wake up at 6:30 the next day and go play for four hours and your mouth hurts and then you get to go eat food and explore the campus, and you go back to getting stuck in the practice room for four hours, and then you give a concert after not even having the sheet music for 48 hours and the whole thing is, it’s kind of exhilarating, and what I have noticed is the really hard work and you get really focused while you’re there, and there also just as fun to remember going and doing it after you’ve had a chance to even out a little bit after all of the hard work, the three-hour drive there and back, you come home and you have the sheet music and you look up videos of other bands playing it and you remember it and the memory stays just as fun as the experience,” Beebe said.

OU’s setting added to the challenge.

“It was hard because Ohio University is such a big hill, it’s on top of a big hill, and it was hard walking up and down some of those hills, but at the end of the concert my lips are just fried. It was awful for the past few days after that,” Curran said.

“For me, the tuba is the heaviest instrument, like Noah was saying you have to walk everywhere at Ohio University, and carrying that is a little bit of a difficulty. But, in terms of playing, like he said, your chops get really tough by the end of it. We’re like working on muscles, so it gets sore for days after, but yeah, it’s fun,” Wood said.

Curran, Wood and Beebe each plan to continue their musical careers in college. Curran and Wood are both going to OU; Beebe plans to attend University of Cincinnati.

What is your favorite musical style or song to play?

Sam Wood: “My favorite song probably on tuba is called ‘Shine.’ Gabe and I played it for another Honor Band last year for the OU one last year. It has a really great beginning and then everybody comes in and it melds together really nicely. I like it a lot.”

Gabe Beebe: “Jazz music is really fun to play, especially on the bigger horns. I haven’t got to experience that as much as I really wish to because we don’t have a jazz band anymore at school, but my favorite song that I think we’ve ever played was one that we played that we played at the honor band this year and it was called ‘Charm’ by Kevin Puts and they didn’t give it to us the first night. It’s in 7/8 time. It’s in a really weird time signature which was the big challenge behind it because you had to learn to count differently than we’ve been growing up with through high school, so it was really fun to get that kind of challenge that we never would have gotten just staying in out high school. That’s one of the funnest things I’ve learned in the Honor Band is the new challenge you play with better people than you’re used to playing with.”

Who is your musical idol?

Noah Curran: “Trombone Shorty. He’s a good jazz player down in New Orleans, and really big down there.“

Sam Wood: “Music in general probably Stevie Ray Vaughan, but in terms of tuba there’s a Russian composer called (Vladislav Blazhevich) and he makes a bunch of tuba … and they’re pretty cool.”

Gabe Beebe: “The saxophone that I’ve idolized the most since I’ve been on it is a guy named Gerry Mulligan, who’s played in a lot of big bands and settings in the ‘80s and ‘90s. He’s mostly featured on baritones, which is my favorite of them. And then there’s a You Tuber who’s had a couple of videos go viral on a DIY instrument that he made that I modeled one of mine after and his name is Snubby J. His real name is Ken Jenkins, and would love to be able to meet him at some point and play around with him. He’s done a lot of different things over the years.”