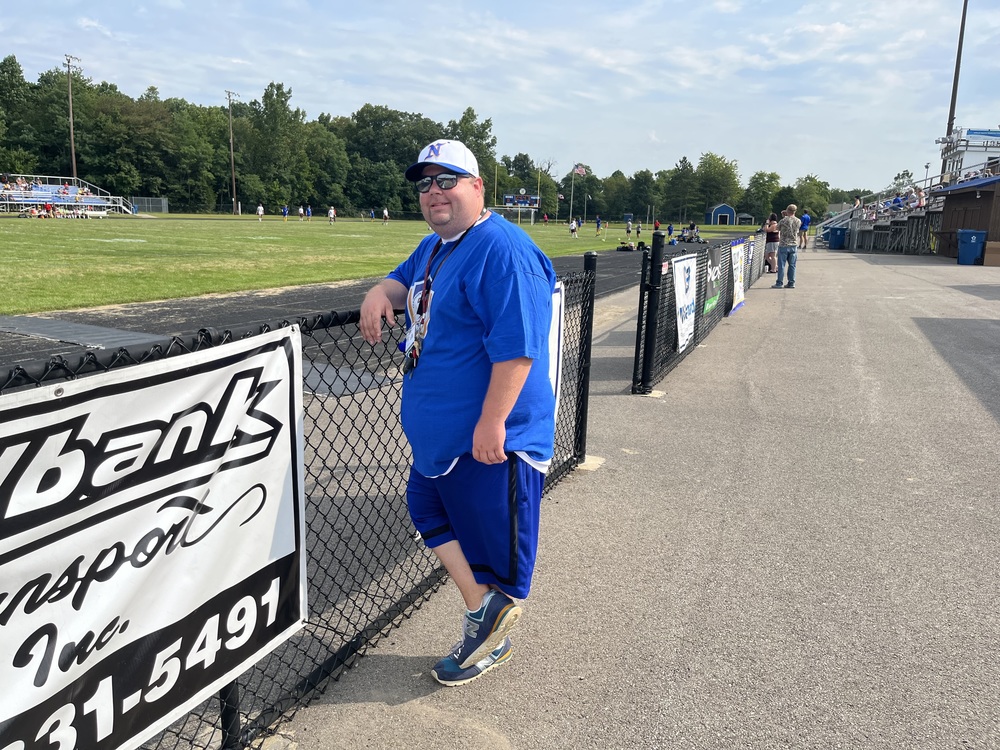 He may be at the gate. Or in the press box. Or cleaning a restroom. Or emptying the trash. Or shuttling back and forth between the high school stadium and gymnasium.

Wherever he is, whatever he is doing at a given moment, T.J. Buckley has been preparing for the opportunity since he was in high school. Now, less than a month into his job as Clermont Northeastern School District athletic director, Buckley is beginning to settle in, with help from his coaches, fellow staff and administrators, and the experience gained working for ADs at other local schools.

The biggest lessons? The value of organization and teamwork.

“The people are great here. They really want to help you. They really want to have a successful program,” Buckley said while watching CNE’s junior varsity boys soccer team play Western Brown Aug. 20 – the preliminary to a varsity game. “They're passionate. They're great, hardworking people.”

A few hundred yards away, in the high school, Assistant Principal Scott Houp was helping run the gate for the volleyball matches against Waynesville, while directing traffic around a 50th reunion gathering of the CNE Class of 1972.

This is Buckley’s first opportunity running an athletic department, but he has worked at various levels, with various responsibilities, at other schools – site manager at Indian Hill High School and youth sports director at Cincinnati Country Day, as well as sports director at a YMCA, among others. He has also coached at Purcell Marian, his alma mater (Class of 2005), and La Salle high schools.

Purcell is where he first became interested in a career in sports administration. His father was a boosters club president, and T.J. played baseball, football and wrestled.

“I found out that I could get a job with sports and hanging out with kids and helping them achieve their goals. That's really what intrigued me,” Buckley, 35, said. He attended Northern Kentucky University for a brief time, then transferred to University of Cincinnati, from where he earned a degree in sports administration in 2010. He recently completed his master’s at Ohio University.

CNE is a new venue for the Oakley native and Sycamore Township resident, but he is familiar with the district, and already a fan. “I've coached against them. I knew some people that went here. Just knew it was a great, great city, great town. Very passionate about their athletics, their school, the community,” he said.

Buckley is a full-time AD; he is not teaching classes, which he says helps him stay on top of all of an athletic director’s duties, which include getting money ready for gate and concessions workers, making sure officials show up and are paid, lining up transportation to away games, confirming schedules with other ADs and hiring coaches.

“There have been times I've had to clean the bathroom after a game or take out the trash during the game. Work the concession stand, work the gate, I mean really anything and everything that has to do with the game,” he said.

“I don't want to sit there and reinvent the wheel because they’ve had a great past. They've been organized. So I'm just trying to stay organized, get everything ready for them and make sure that we're still running on all cylinders.” CNE has won the Southern Buckeye Athletic and Academic Conference’s All-Sports Trophy each of the last four years, under former athletic director Dave Colwell.

Those with whom Buckley has worked know he will be successful with the Rockets.

“I initially knew T.J. and his family when I was a teacher, coach and AD at Purcell Marian in the ‘90s,” Mariemont High School athletic director Tom Nerl said. “As part of his senior project (at UC), T.J. and his team organized and implemented a 10-year celebration of Mariemont's first lacrosse championship. T.J. and his team organized the event around a game on the schedule and welcomed back our championship team and their families. He's worked hard to get to this point as a full time AD, and I am happy to see him get this opportunity.”

CCD athletic director and head football coach Dennis Coyle was defensive coordinator at Purcell Marian when Buckley played on the Cavaliers’ junior varsity football team. “T.J. has a big heart and is willing to put in the hours and understands the demands of the role of an athletic director,” Coyle said.

“I have found T.J. to be a very hard-working and proactive athletic administrator,” Indian Hill athletic director Brian Phelps said. “His calm demeanor and willingness to listen to all sides of a problem will help him develop relationships within his community.”