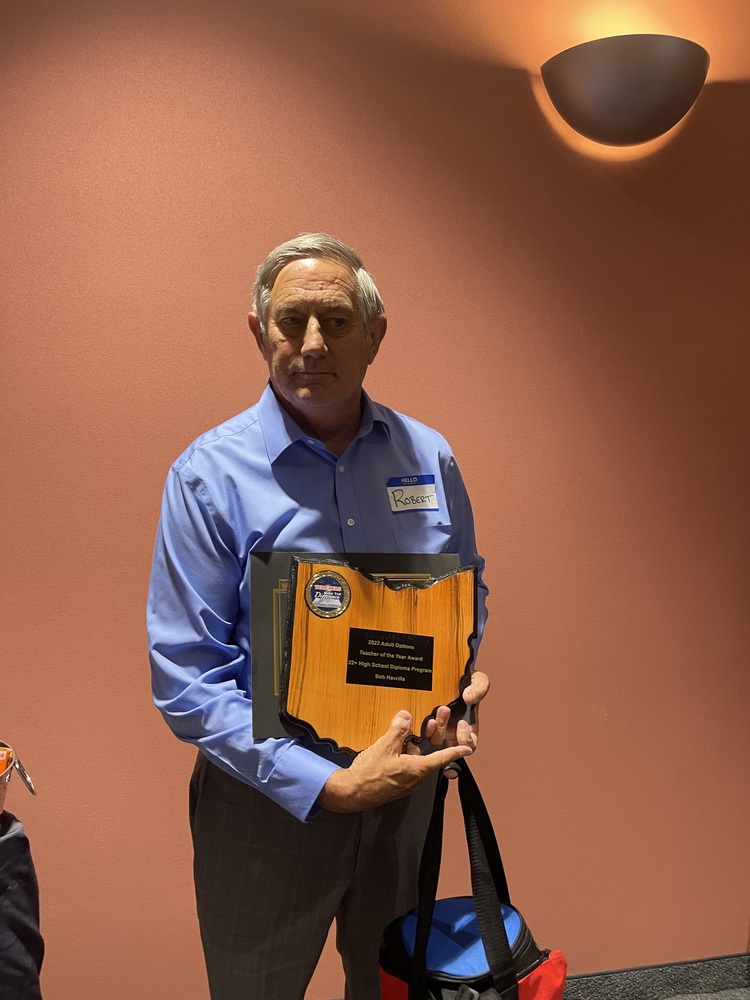 Bob Havrilla has one diploma from Clermont Northeastern High School, earned more than 50 years ago. He is, though, in at least some small way, responsible for 224 others, all awarded in the last four years.

Havrilla, 71, is the coordinator/instructor of CNE’s Adult 22-Plus program, which began in January 2018 and helps those 22-and-older, who for one reason or another left high school, return and complete their education. The Ohio Department of Education has named Havrilla its 2022 Adult Options Teacher of the Year.

Running the Adult 22-Plus program is a continuation of Havrilla’s almost 50 years in education – career that began in 1973 when he was hired as an industrial arts teacher at Felicity-Franklin School District, four years after graduating from CNE. He moved to Batavia Local Schools in 1978, and became assistant principal of the junior high school and high school there in 1990. In 1992, he joined the Great Oaks Joint Vocational School District and held various roles there until 2012 (he briefly retired in 2007 before returning). He was elected to the CNE Board of Education and served there from 2012-2016, then volunteered in the district.

While Havrilla was on the board, it hired Michael Brandt as superintendent. Brandt then turned to Havrilla in 2017, asking him to lead the Adult 22-Plus program.

“He asked me if I'd be interested in looking at this program to help people in the community and the area at large to get a high school diploma,” Havrilla said. “So we sit down and talk, we talked to the coordinator at Dohn Community School, and we agreed that this would be a good part-time job to help people.”

The program was ordinally set up to run three days a week – two morning or mid-day sessions, and one night session. “We realized that we weren't serving the clients that we needed to because a lot of people worked, had family, so we added Saturday,” Havrilla said.

Students meet with Havrilla in the Adult 22-Plus classroom, on the second floor of the preschool building in Owensville. The room has several rows of tables and leather chairs. Havrilla may be teaching one student, or several at a time. Some prefer online learning – Havrilla accommodates those requests. He even follows up with a small percentage of students who start the program, but discontinue for various reasons.

“A lot of times you have people, they have families, especially the ladies, they have younger children, and they have to take time off to take care of them and then other things,” Havrilla said. “You know, they take a few days off or a few weeks off, but … we're always in contact with each other and then they can come in and out as they choose. They don't have to schedule times. They know my hours. But I do call them and sort of, I shouldn't say harass them but encourage them to come in to try to get things finished.”

James Keirns, a member of the first Adult 22-Plus graduating class in June 2018, said Havrilla pushed him to finish his classwork, and fulfill a promise Keirns had made to his grandmother.

“He was constantly calling me and saying, ‘When are you going to be able to come in again, because we’d like you in here,’ and I’d go in and study, do the tests,” Keirns said at the 2018 ceremony.

Andrew Herndon, who received his CNE diploma in January, said Havrilla helped him through difficult times, including the death of his brother. “I definitely had some obstacles that arose while I was in school with Bob, but I fought through it and made it happen. Bob worked with me,” Herndon said.

“He dedicates himself to his students. He loves what he does and honestly he’s the only one who can do it, just from what I’ve seen,” 2021 graduate David Lee Hughes said. “So if he’s coming over here to help me with math, a second later he’s helping someone with history, science, whatever it is. Just a great guy for that role.”

Another 2021 graduate, Victoria Witt, left school in the ninth-grade. When she learned about the Adult 22-Plus program, she was “hesitant,” until she talked with Havrilla.

“It took me a while to actually get into the program because I was scared, but Bob called me and he always was adamant being able to do this. He never doubted me. He said, ‘Yes, I know you can do this. You’re an amazing person, this and that. So he really pushed and made me feel like ‘I know I can do this. I shouldn’t be scared of it,’” Witt said.

Havrilla said coordinating the program and working with the adults has been “fulfilling,” but deflects the credit to the students and the CNE administration.

“Being an educator, you know that all people can learn. It's just a matter of finding out the way they can learn and encouraging them to work through things,” he said.

“Without the students, we wouldn't have this program. And so, I'm proud and privileged to be the instructor here at 22-Plus for CNE, I hope I can continue that role. And again, it was sort of a surprise to me that I was nominated and selected. So I mean, it was pretty exciting. Not just for me, but for the school district becausewithout Mr. Brandt and the board, we wouldn't have this program.”

CNE Principal T.J. Glassmeyer said the district is blessed to have Havrilla leading the program.

“He works tirelessly to ensure every student (who) enrolls gets the attention and assistance they need to be successful.  Bob puts in countless hours to ensure the adults in the program are able to achieve their goal of earning a high school diploma,” Glassmeyer said. “We are excited the Ohio Department of Education recognized what we already knew - that Bob is a tremendous educator, cares deeply about his adult students, and will do everything he can to ensure they are successful.”

The Adult 22-Plus program is open to all Ohio residents – Havrilla said he has had students from Washington Court House, West Union and Winchester. For more information on the program, visit www.cneschools.org/page/22-adult-diploma.