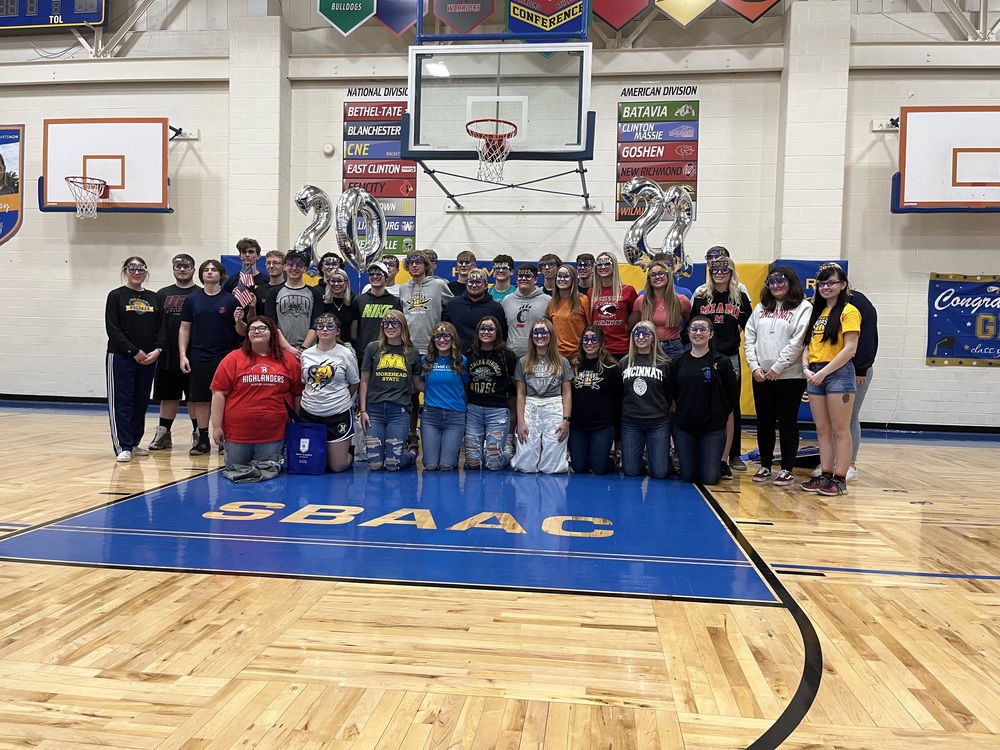 More than 40 Clermont Northeastern High school seniors were the center of attention May 9 in the school’s gymnasium, but their schoolmates watching from the stands were also a focus of the events.

CNE hosted it fifth Senior Academic Signing Day – the first was in 2017, there was no event in 2020. The academic signing ceremony is modeled after a national initiative, Reach Higher, which sets aside a day at the end of the school year to celebrate seniors who have chosen a post-graduate path. CNE has three goals each year for its graduating seniors – continue their education, have a career lined up, or join the military.

Kody Becker is joining the Independent Electrical Contractors, a national trade association. He began considering that option during his junior year, he said.

“Just kind of figuring out college wasn't my route and then looking into trades and doing more research really showed that electricians showed some interest and went from there,” Becker said. He will work as an electrician over the summer and then begin four years of trade school in August.

Becker’s father and grandfather do their own electrical work, which helped sparked his interest. “I've been doing a little things here and there, kind of getting my way up there,” he said.

Jamie Becker, Kody’s mother, posed for photos with her son, and is excited for his next step.

“I think at first it was a little bit of a surprise. But once he kind of looked into it and saw how many different options there were for electricians as far as different fields, he really was interested in that,” Jamie Becker said. “But yeah, just a lot of big emotions, seeing everything just kind of come together. It's exciting. We're happy for him.”

Levi Goodin will also have a short summer break. He reports for basic training, in the United States Army National Guard, June 13.

“Honestly, I didn't really know what I wanted to do and they had a presentation at the school last year. It was interesting. So I went to the office and started talking to them and one thing led to another,” he said.

Goodin, whose uncle was in the Reserve, admits to some nervousness about basic training. “I think that's sort of natural. And I look forward to just getting to a unit and go from there,” he said. He complimented CNE’s staff, and said his favorite subject was Megan Yeager’s math class.

“I say the staff was pretty great. I love all the teachers,” Goodin said.

Summit Northup is one of four seniors headed to Northern Kentucky University. The two-time Southern Buckeye Academic and Athletic Conference National Division cross country Athlete of the Year placed seventh at the Ohio High School Athletic Association Division II state meet in November. He also won the 800-meter, 1,600-meter and 3,200-meter runs at the 2022 SBAAC track championships earlier this month and was the SBAAC National Runner of the Year. Northrup plans to compete in both sports at NKU.

“I was looking around for schools, good running programs, and somewhere that was somewhat close. I went over there and met with coach (Steve Kruse) and liked the campus and just kind of went with it,” Northrup said. He plans to major in business administration.

“That was the first time in like 17, 18 years. So that was really fun. And then just the friendships and the support that everybody's given me throughout the years,” he said. “It’s great. I mean, it's fun to have all the support from everybody and other teachers and the students and staff.”

During the ceremony, representatives of 26 colleges, as well as military branches, presented seniors with gifts from their schools (in some cases, staff and faculty members sat in for colleges or groups that were unable to send someone. Band Director Chris Moore, an Ohio University graduate wearing a green-and-white Bobcats sport shirt congratulated the three seniors headed for Athens). Students also received blue-and-gold CNE T-shirts with their last names on the back, as well as bags of candy and “2022” fake glasses.

Family and friends sat on one side of center court; students on the other side. One of the goals of the event is to inspire the students in the stands to be on the floor in future years. Counselor Amy Comisar issued such a challenge.

“We are proud to see them committed to the next step of achieving their dreams,” Comisar said of the graduates. “We also challenge you, the members of the class as of 2023, 2024, 2025 to take an active role in your current education. Strive to do your best and to challenge yourself. Explore career and education options for your future. And most importantly, ask questions and seek guidance from your family, your teachers, your principals, counselors and friends. Never stop dreaming and never stop learning. We are here to take your life to where you want it to go.”

Comisar and intervention specialist Jill Stegemann helped organize the event, and staff and alumni donations helped with the cost of Tshirts and other gifts.

Clermont Northeastern seniors who signed with colleges May 9 (alphabetical by college or destination):

Tristen Hensley (did not attend ceremony0

Ethan Wilson (did not attend ceremony)

Carmen Leopold (did not attend ceremony)

Hunter Burdine  (did not attend ceremony)