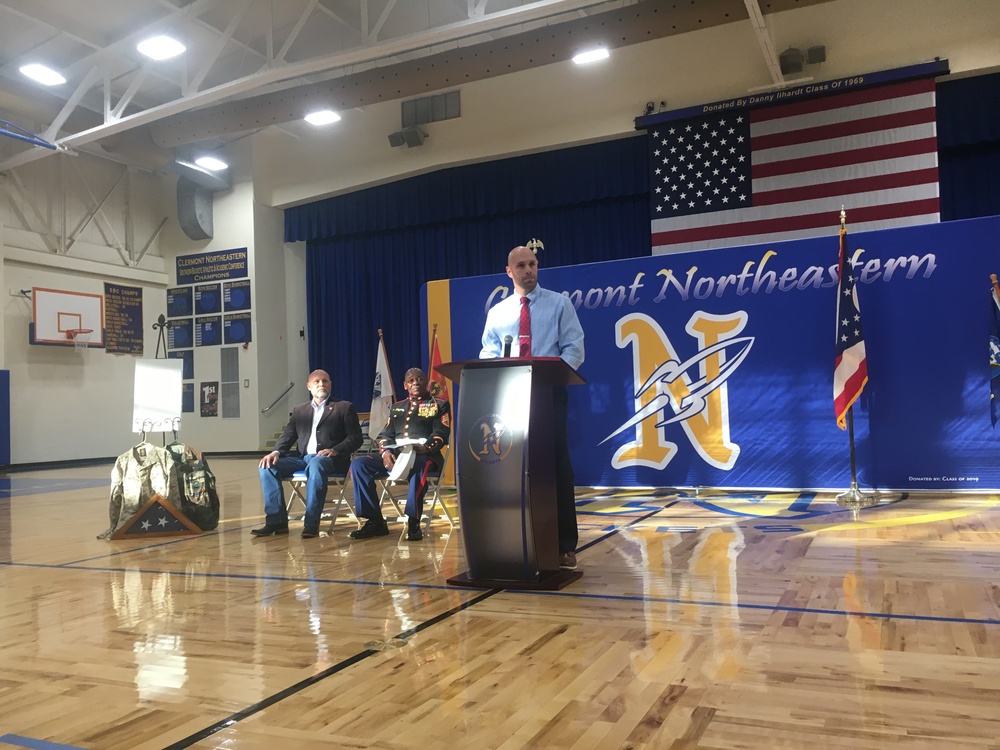 They were together Veterans Day, Nov. 11, in the Clermont Northeastern High School gymnasium, sharing stories of service and sacrifice with students and faculty.

Ferris, 73, is a staff sergeant. He serves on the Warren County Veterans Service Commission, is Past Commander for the State of Ohio for the Military Order of the Purple Heart, and current commander for the Purple Heart Honor Guard. Prazynski, 59, is involved in several organizations that support veterans and the families of military members who lost their lives in service. Ferris told his story, of earning three Purple Hearts, but losing five friends. Prazynski told his son’s story, and the last time he saw him – New Year’s Day 2005.

Spunky. J.C. Coconut. Flatfoot. Sunny. Those were Ferris’s friends, whom he convinced to join him and enlist in the Marines in 1967. Ferris signed up, he said, because of the uniforms. His father worked at the Federal Building in Downtown Cincinnati, where recruiting offices were located. “And so I happen to see this guy come out who's dressed like I am today, and I said to myself ‘I want to be one of those guys. I like that uniform.’

The six finished school and then boarded a plane for the Marine Corps Recruiting Depot in San Diego.

“When we got there, we looked at each other and said ‘What have we done?’ We didn't realize how difficult this was going to be. But we knew that our mission was great and that we were going to have to persevere, so we did that,” Ferris said.

Soon, they were again on a plane, this time headed for Da Nang, in Vietnam. There, as Ferris said, the “Buddy System” was discontinued, The six vowed to stay in contact. “It was difficult. Combat is terrible. It’s something that you've been through in training, but you've never felt you could ever experience that terror and the horror of it. But as a single man, I broke up with my girlfriend and when I left because I said to her, ‘You need to live your life, because I’m not sure if I’m coming back.”

He came back. The only one of the six to do so. Ferris was injured – “took a ricochet in the neck” – and while recuperating, noticed he had not been receiving mail. He wrote to his mother, asking her to go to Sunny’s house, talk to his mother and get his new address.

Ferris was injured a second time, shot in the shoulder, but decided to re-enlist, in tribute to his friends.

“I carry that baggage with me to this day. Because I feel responsible. Even though people have told me you're not responsible for that, they made a decision. But it was my encouragement and asked them to go with me. We were 18-19 years old. They never got a chance to grow up. They never got the chance to have a family, to get married. And I carry that with me every day,” he said.

Prazynski told the story of Sept. 11, 2001. He was watching TV coverage of the events of that day, the attack on America, with his son, Taylor. They talked about how the United States would respond. Taylor was then a sophomore at Fairfield High School. The next year, 2002, he told his father that he wanted to join the Marines.

“He said, ‘They’re the smallest branch of the military. They’re an elite team.’ And I said, I understand that. And then he said, ‘I want to personally know that I have what it takes to make it through Marine Corps,’” Prazynski said.

His father eventually agreed, and Taylor went to boot camp at Parris Island, South Carolina. He was assigned to help keep peace in Haiti during a military coup. Taylor spent the 2004 holidays at home, and on Jan. 1, 2005, left with a friend for Camp Lejeune in North Carolina, and eventually Fallujah, Iraq. They joined hands – Taylor, his friend Troy, John and family – and prayed for the safety and well-being of Taylor and Troy.

On May 10, just 15 minutes past midnight, two Marines knocked on the Prazynski front door and relayed the news: Taylor had been killed in Iraq. Members of his unit were hunkered in a farmhouse, trying to close the Syria-Iraq border to terrorists. Taylor was hit by mortar fire.

John informed family members, including Taylor’s grandmother, to wh9om Taylor was close. Then, as he said, they began “the journey of our lives.” he read a newspaper article about Taylor being the first Marine killed n the War on Terror. The article labeled Taylor with a number, which “broke my heart,” John said.

“So I said to my wife, Caroline, I said ‘That's it. We can't do anything for Taylor. But we can do something positive for the folks that served and were injured or wounded,’” John said.

‘It’s a wonderful way to get back, and so we made the choice to take something so negative and try and turn it into something positive,” John Prazynski said.

Clermont Northeastern teacher Steve Thompson, one of two Purple Heart recipients on the high school faculty (Michael Tabor is the other; Anne Stenger is a military veteran), is a friend of Prazinski and invited him and Ferris to the school.

“The purpose of today's assembly is to provide you with one thing: perspective. Perspective to understand what this day is about,” Thompson told the students. “A day to honor those who decided that they love this country so much that they're willing to die for it.”

Ferris and Prazynski said their message was about decisions.

“That when you meet a veteran, it involves service and sacrifice and that they should appreciate that from each of the veterans, and they also have choices to make and no matter how bad the circumstances that you can make the choice to be positive and do something good,” Prazynski said.

“We put on a uniform and swore an oath to defend the Constitution of the United States about all enemies, foreign and domestic. When you do that, it's not a conscious decision. It's a big decision and when you raise your right hand, so I always said that heroes are not a reaction. It's a decision,” Ferris said.

Spunky, J.C., Coconut, Flatfoot, Sunny and Taylor all made that decision. 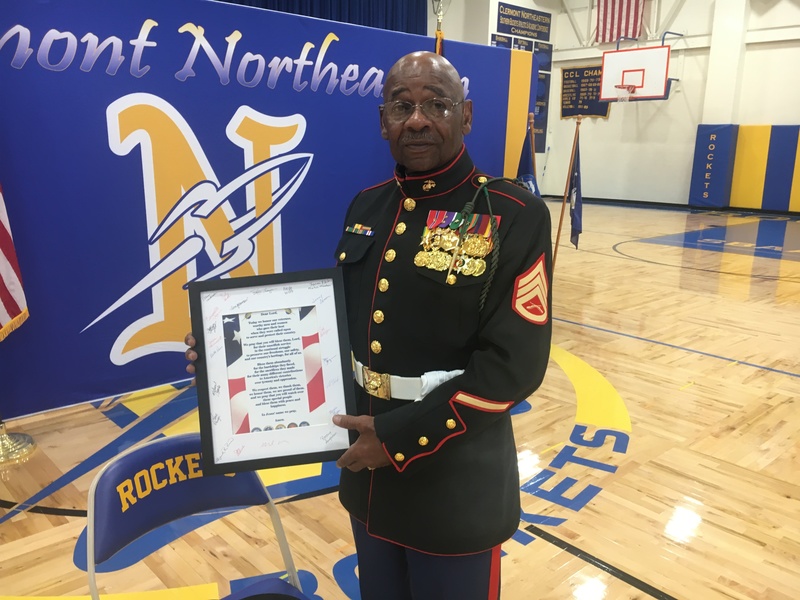 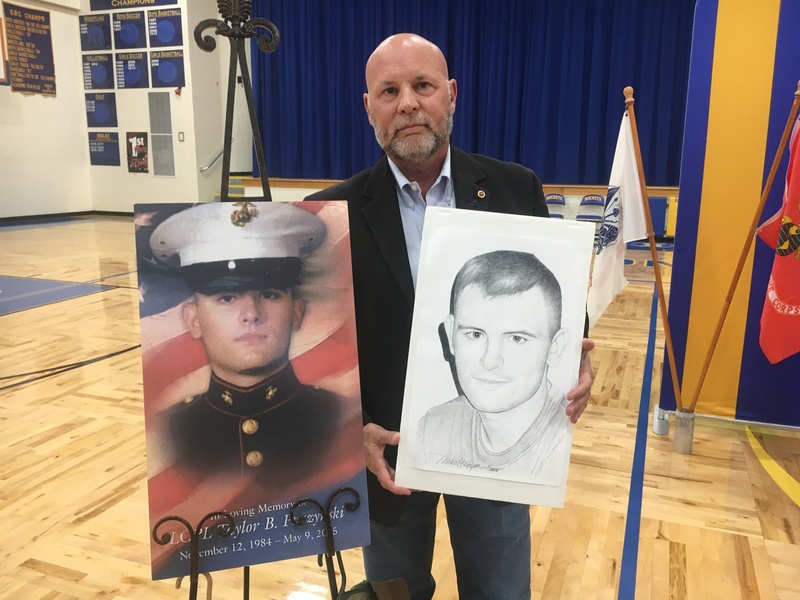