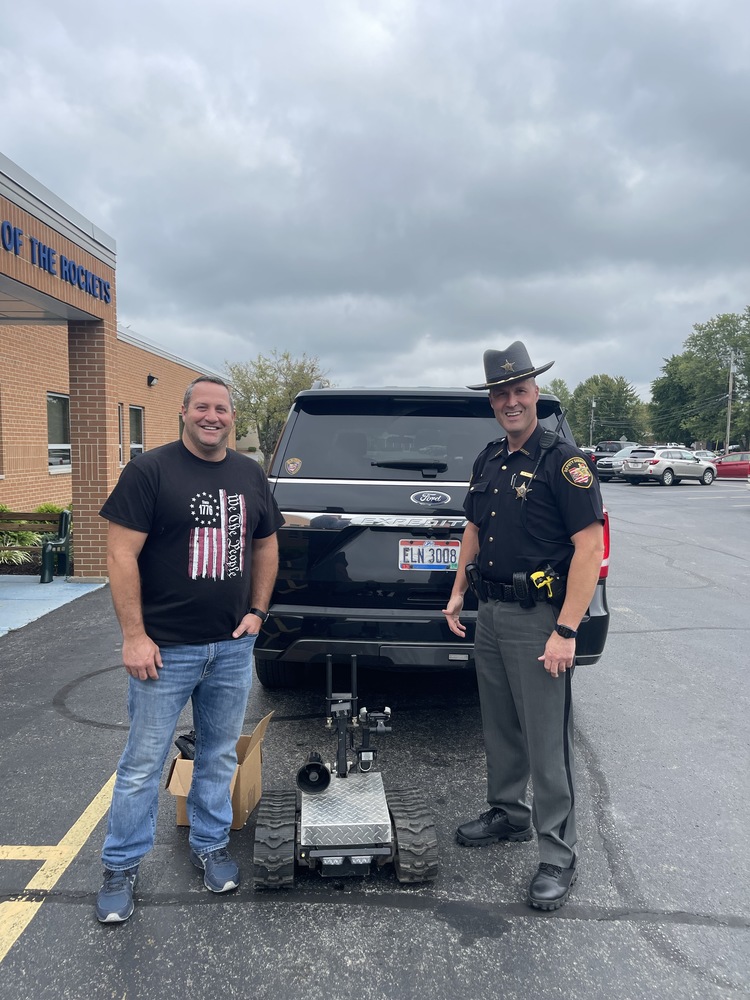 The pace of technology advancement has come to this – a robot is now practically “old school.” That will benefit students of Cihan Taktak’s robotics class at Clermont Northeastern High School.

Taktak has a used – he estimates it’s six- or seven-years-old – robot track rover, donated by the Clermont County Sheriff’s Office. The tracker became outdated, and the department offered it to CNE. Sheriff’s Deputy Ryan Patton is CNE’s school resource officer. Taktak and his students will put under a microscope, so to speak, to learn how it works, and fix what doesn’t.

“Basically when I got it the switch wasn’t working … and that was an easy fix,” Taktak said. “And the left wheel gets weak, starts fading out, which we've isolated that it's interference with the metal cover. So trying to figure out why, what's causing that and how to avoid that, and then the next step is to actually get into the website side of it, and kind of write our own website to be able to control the audio and videos as we need it, not necessarily the pre-program police responses that are there,” he said. Taktak also teaches computer programming and 3D modeling.

“My robotics class will end up going through the engineering of it, how does it function? How would what they're doing there translate to a future of building a robot, similar to that,” Taktak said. “And then, once I get into it, probably incorporating in my programming class also, because it's got some programming like a website that runs from that machine to run all the audio and video.”

High School Principal T.J. Glassmeyer said the school has always had a strong partnership with the Clermont County Sheriff's Office.

“We are incredibly fortunate to have one of their highly trained deputies on our campus each and every day, Deputy Ryan Patton. Members of the department volunteer to speak in classes, participate in events, and support our teachers and staff in any way they can,” Glassmeyer said. “The donation of the robot is the latest way they have sought to help our students. The robot is a valuable teaching tool and will provide countless ways for our students to demonstrate their knowledge in a hands-on way. We truly appreciate the Sheriff's Department and everything they do for our students, staff and school community.”

Relationships with schools across Clermont County are a priority to Sheriff Robert Leahy.

“Our Special Response Team robot outlived its usefulness related to the our needs and I was pleased to be able to donate it to CNE’s Robotics Program. I hope the students in the program benefit from their experiences as they work with it,” Leahy said.

CNE’s tracker originated as a project for a Northern Kentucky University student, and was used by the department for situations such as hostage negotiations. Officials could put a phone on the tracker and send it by remote control into the scene without endangering personnel.

“There's some pre-programmed statements on here like ‘pick up the phone,’ ‘call us.’ There's also a dog barking. There's actually several different songs that were on there, they would play on a loop that tend to be annoying, that can drive someone out,” Taktak said.

Two large batteries power the tracker. They are stored under a cover on the base of the tracker, along with a component that holds all of the electronics hardware. A router, similar to one found in homes, provides the web access to connect to a tablet. The tracker also has three cameras – two facing to the front and one to the rear, a speaker, flashing emergency lights and headlights so it can be operated in low-light areas.

Taktak has been carefully documenting the tracker’s construction. The software runs off a Raspbery Pi mini-computer, and Taktak is able to plug it into a monitor and dig through the file system.

“There are no directions, there's nobody to reference to if I mess something up. I don't have a way of going back and figure out what it was supposed to be, so I'm going to dig in through slowly and I'm actually going to try to take their central computer, put it on the shelf (amd put n a new Raspberry Pi)… That way there's a reference,” he said.

Several of the higher-level students in Taktak’s class may use the tracker as an independent study project, and his app development and programming classes may write apps to control the tracker.

Taktak said he has been a bit of a “computer geek” since high school. He earned an information systems degree from NKU, and became a teacher after he was laid off from a previous job.

“My wife, who's also a teacher, came home one day and said there's a computer science opening at Glen Este High School, which was our alma mater, and at that point I was laid off so I thought I'd do something for a year and just ended up loving it,” Taktak said.

He is in his 12th year at Clermont Northeastern, and the robot tracker is a new challenge.

“It’s kind of forcing me right now, to learn, like it's based off like a (remote control) airplane controller, and understanding how the relaying and the wiring, and how certain things are controlled running through relays, you know the power system, stuff like that,” he said.

“Supposedly the RC unit will go about three to five miles, so in theory this thing could be driving anywhere around campus while sitting in this room or whatever, as long as you had a way of observing it. So, I guess, the kids are pretty excited about it, a lot of questions of ‘can we do this?’ or ‘can we try that?’ so that gets them thinking the possibilities what that robot can do.”