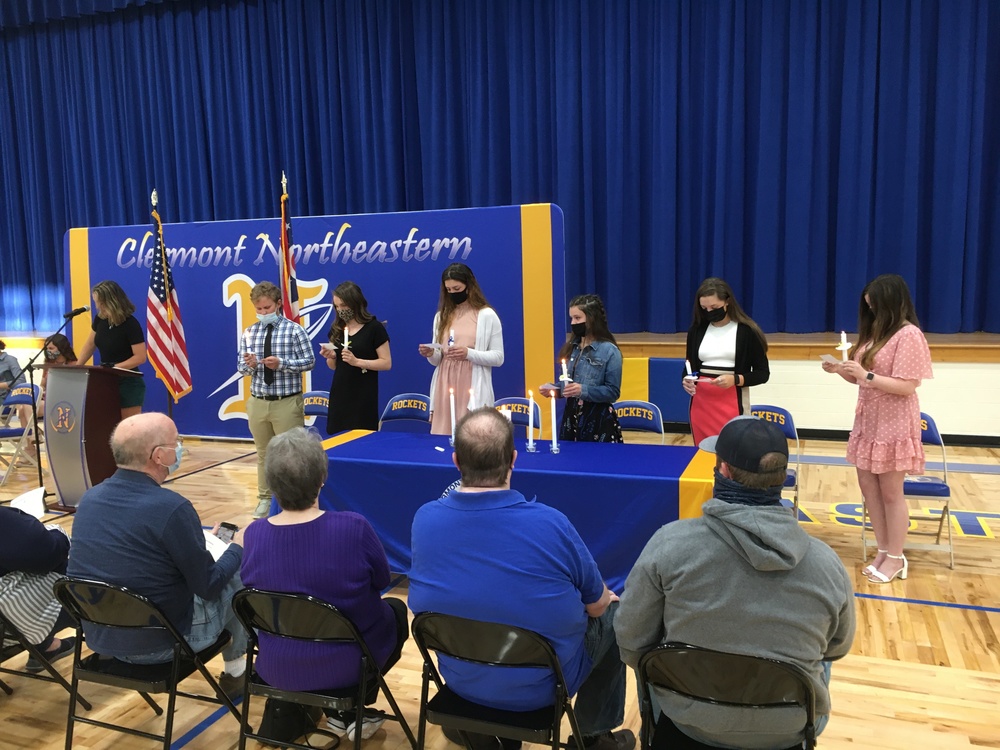 It seemed somehow fitting that after a year in which education changed and adapted in ways few could have anticipated, a truly old-school ceremony completed the circle at Clermont Northeastern High School April 30.

The high school’s National Honor Society inducted six new members that morning, Family members were welcome; students watched the ceremony in their classrooms, 414 days after the 2020 ceremonies, March 12 – the last school-wide event before schools across the state closed.

2021 is the 100th anniversary of the founding of the National Honor Society’s founding, and the induction ceremony is highly structured. Inductees marched into the school’s gymnasium, down the ramp at center court. CNE National Honor Society President Hollie Daniel led a ritual that included officers speaking about the four pillars of NHS – scholarship, service, leadership and character – and lighting candles symbolizing each. The new members then lit individual candles from the four main candles, and pledged their oath.

The number of new inductees is half of the 12 inducted in 2020, but the significance has not lessened.

Senior Hailey Stegemann is one of the new members. She will attend Tennessee State University to play golf, so her college plans were set before the NHS induction. Still, she said, it is a fitting conclusion to her high school career.

“‘It’s important because my sister was in this when she was in high school and I know it’s a very high honor and something not a lot of people get into, so not even putting it on the resume, but doing that just to say I was in it and help and doing things in the community, and the schools, that’s what’s most important to me.”

Faculty advisor Steve Thompson said members are chosen through a process that includes a teacher panel that evaluates all candidates. Students must have at least a 3.5 grade point average to be considered, and also write a short essay explaining why they deserve consideration. All candidates are considered anonymously.

“All the community service, everything that goes into it. Every little minute detail that they do, they put in there, and we tell them … to lay it out there, to sell yourself.”

Thompson estimated 13 students applied, though a couple withdrew their names. Students can reply if they are not selected. “That’s all part of the process … they’re still reapplying. They didn’t go home and pout,” Thompson said. He and Daniel said the challenges of the last 12 months may have limited the number of applicants.

“I think so, because they were so busy trying to get good grades that something like this comes as an afterthought,” Daniel said.

Community service is an important aspect of NHS membership. Stegemann, for instance, highlighted a clothing drive she helped organize for Matthew 25: Ministries in Blue Ash.

“I think it’s really important to dedicate yourself to community service, so National Honor Society gives me an opportunity to do that myself and get other people involved in it,” Daniel said. She will attend Miami University and study biochemistry.

Thompson said his role in the ceremony, and the society’s day-to-day operations, are minor.

“It’s honestly, it’s her club,” he said, referring to Daniel. “I don’t believe a teacher should do anything as far as a simple advisory role. If we wanted to do anything, we work with a non-profit, she did that, she selected everything. This is her group.

“Honestly. This is the easiest job to have. It runs itself. They’re the best of the best. They step up and lead.”