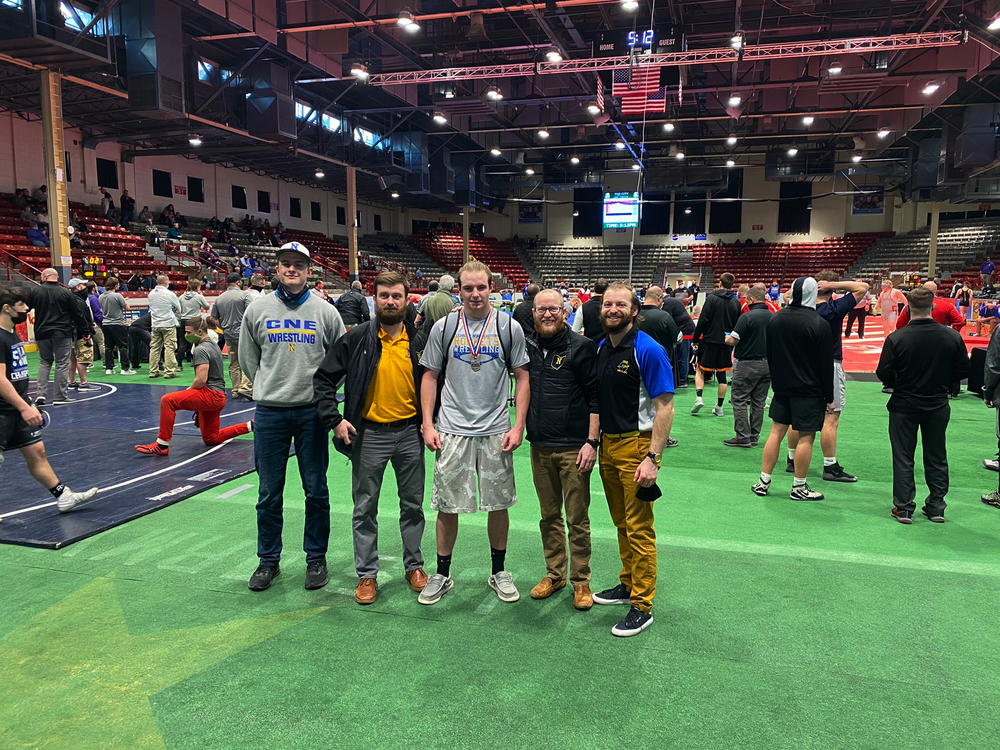 Mattes excels on mat for Rockets

Mattes excels on mat for Rockets

The venue was smaller than usual, but the stage was the biggest of his life.

He knew little, if anything, about his competition.

Hayden Mattes was where he wanted to be, where he planned to be.

Marion is 60 miles north of Ohio State University’s Schottenstein Center, which usually hosts the state tournaments. The OHSAA instead use three sites – one for each division – in an effort to limit exposure. Three days before his first state match, Mattes was wrestling in the basement of CNE’s old elementary school.

Coach Scott Wells, who has taken wrestlers to Schottenstein, said the smaller arena would not lessen the excitement.

“I think that the venue is nice, like Schottenstein was always that great experience, but I think when you reflect back on things, you say state placer, state qualifier, you say state champion, you don’t talk about the venue, it’s the accomplishments that have come,” Wells said.

Four years before his first state match, Mattes wasn’t wrestling at all. He came out as a freshman to stay in shape for football – he’s an offensive lineman and middle linebacker on the Rocket team, and was first-team All-Southern Buckeye Athletic and Academic Conference National Division in 2020.

Attracted by the individual nature of wrestling, “It slowly turned into the opposite where I am a wrestler who plays football now,” Mattes said.

Mattes weighed 210 pounds as a freshman, cut weight to compete in 195-pound class as a sophomore, dropped as low as 160 (wrestling up a class at 170) before adding lean muscle and mass and settling in at 195 this season. Through it all, he learned that what he does is more important than what an opponent might do to him.

“What it comes down to is me being more fundamental at my skillset than theirs, wrestling my match at my tempo, which I think I’m good at,” Mattes said.

“For Hayden it’s a big advantage because he doesn’t worry about what the other kids will do. It’s imposing his will, staying in good position, and him controlling his size to where he does what he wants to do, and the kids have to game plan for him versus us game planning for them,” Wells said.

The week leading up to state was a struggle, Mattes admitted, describing competing at that level his “life’s purpose, my mission as a young adult.” His second victor at the regional tournament, which assured him a state berth, was “a sense of relief on my heart.”

Wells even felt the emotion.

“So far every time that this has happened I tear up a little bit, because I knew that he could do it, I knew that this was also a kid that has been stripped of a lot of things,” Wells said. “He had the lifelong dream of being in the Marine Corps, and because he had a hip issue, even though he’s a tremendous athlete, he’s been through football and through wrestling, and he’s fine, he’s not allowed to do that. There’s been things out of his control, it’s been devastating to him, so when he got to it, I teared up a little bit.”

Mattes finishes his career as a three-time regional qualifier. He placed third in the SBAAC at 170 pounds in 2019-2020 before winning the 195-pound title in 2021. He placed at sectional each season – second as a freshman and junior; fourth as a sophomore, and sectional champion this season.

He won more than twice as often as he lost – 102 victories, 50 defeats – but achieved even more.

“I always set new goals, always hungry, always striving, but now that I know I can achieve anything I want,” Mattes said.

“I would have been devastated if he hadn’t made it, Wells said. “We talked about it at the end of districts last year that he would be in Columbus this year, as soon as he got knocked out of last year’s district tournament, we knew that he was going to come back and he was going to get to Columbus.”