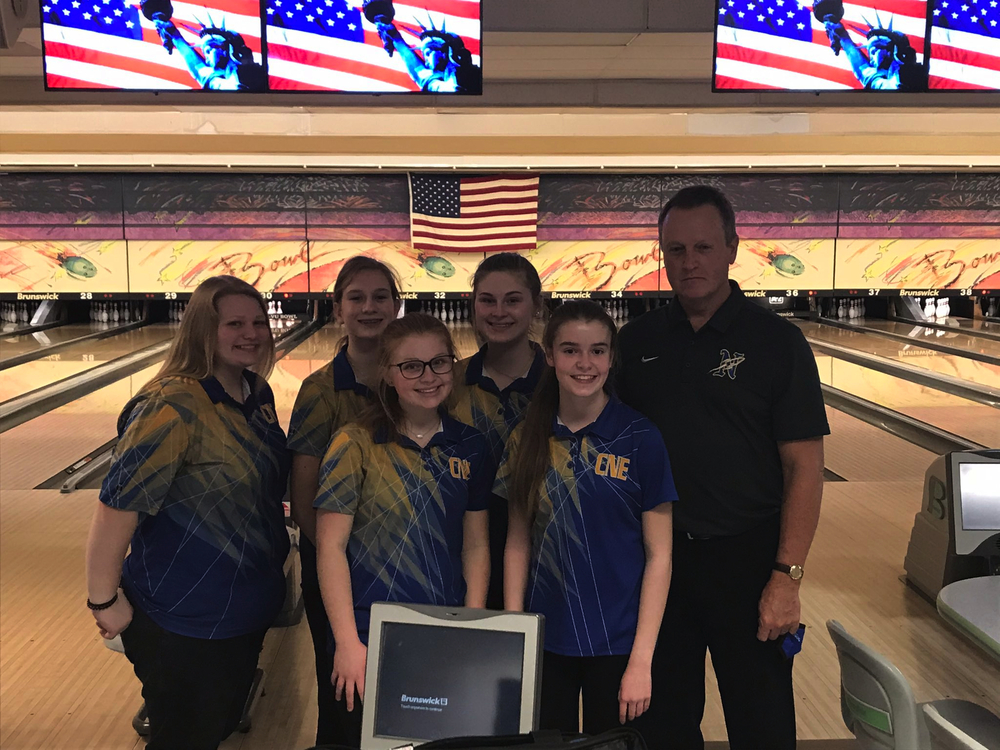 They had lost only one dual match all season and were getting ready to defend their Southern Buckeye Athletic and Academic Conference National Division championship. On that early February day, bowling became secondary to the Clermont Northeastern High School girls team.

The Rockets learned that their leadoff bowler, senior Hannah Newton, would not be with them at Royal Z Lanes in Wilmington. Newton had been involved in an accident, hit by a car while driving to the school to board the bus for their conference tournament. Replacing her 138.7 average was the least of their concerns. One of the best seasons in CNE history suddenly seemed irrelevant, secondary to what

had happened to their teammate.

“We were on our way to a match that morning and the entire bus ride we were all speechless. When we arrived, (coach) Jeff (Connor) got a call saying that Hannah was very banged up, but she would be OK,” Eifert said. “This was a huge relief for all of us and we decided that from that moment on, we bowled for Hannah. We bowled really well that day and we did it for her.”

The Rockets rolled a three-game regulation total of 2,298 and two-game baker total of 291 – 2,589 total, and had their SBAAC National championship. The next day, they won the Mariemont Classic at Madison Bowl and took that momentum into the Division II sectional tournament at Cherry Grove Lanes, placing second to qualify for the district tournament for a third consecutive season, placing 10th.

Newton, who says she is “feeling much better and improving every day,” doesn’t remember the accident, other than what she has been told. She learned about the team’s championship two days later.

“I didn't find out till Monday afternoon because I was still in critical condition, but I was excited and very proud of all my teammates for winning the league tournament,” she said.

The 2020-2021 season was Connor’s fourth coaching both CNE varsity teams. Two of his bowlers, Eifert and Alyssa Ferguson, were with him all four seasons. In that time they have won three conference championships and finished second in 2018-2019, qualified for district three times, won 88 of 98 matches, and were 184 pins away from a state tournament berth this season.

“I knew we had a good core of bowlers coming back this year,” Connor said. “Two were three-year returning bowlers and two were two-year returning bowlers (Newton and Alexa Ansteatt). To round out the team Haley Eifert (Michayla’s sister, a sophomore) stepped in and was a valuable asset. In her first year she ended up with the 16th highest average in conference play.”

Freshman Lucy Sullivan has played only 10 matches before the league tournament, and had to step in for Newton. She bowled a three-game total of 298 at the SBAAC, a 361 in the Mariemont Classic, a 339 at sectional and a 324 at district. This season, teams could take only six players to any varsity match, meaning CNE had no available substitutions for the postseason.

“It was a lot of pressure on her bowling with the other older and more experienced girls,” Connor said.

Michayla Eifert finished with the third-highest average in the SBAAC – 179.9, with a high game of 235 at sectional and a high series of 414, Dec. 15 vs. Williamsburg at Batavia Bowl. The performance at the league meet earned her a third SBAAC National Division Player of the Year Award; she also won in 2019-2020 and 2017-2018, particularly impressive for someone who had never bowled before high school. She credits two people for her success – her grandfather, Dave Brown, and Connor.

“If it wasn't for Jeff, we would not have had a bowling team at all. Even if we had another coach, we might not have been as successful,” Eifert said. “Jeff worked with all of us with so much patience. We all started out as clueless bowlers. We did not know how to throw the ball, where to throw the ball, or even about the oil patterns on the lanes. He taught us and myself so much about the sport and I could not thank him enough.

“My grandpa has been there bowling with me the moment I decided to bowl. He bought me a bowling ball and my equipment and went to practice with me every single day,” she said. “My grandpa has bowled for most of his life, so he is very educated about the sport and helped me become the bowler I am. I know everything I do about it because of him. He never missed a practice or a match and for that I am eternally grateful because I don't know what I would've done without his support.”

Bowling, Eifert said, combines the best aspects of individual and team sports. She referred to a 200-pin victory over Williamsburg Jan. 16, 2020, as a benchmark for the CNE program.

Eifert was a four-time district qualifier – three times with the CNE team and once, in 2017-2018, as an individual.

“I was blessed enough to have amazing teammates both on the girls and boys teams. I have always been proud to be a part of the bowling team because of the teamwork and sportsmanship. We have always had a great support group for each other and we always try to encourage one another,” she said.

Her CNE athletic career now complete – Eifert also played soccer for four seasons – she is ready for the next phase of her life. She plans to study nursing at the Christ College of Nursing. Newton plans to pursue a nursing degree and work in a hospital.

“Something I will most remember is how I enjoyed being on such a great team while always having fun with all my teammates throughout the years and how the friendships built will last a lifetime,” she said.

Player of the Year – Michayla Eifert.

“Michayla's average for her four years was: 135, 152, 172 and 180 her senior year.  She has improved each year,” Connor said. “Michayla consistently practices on her own and temporarily left her part time job to focus on bowling. She is dedicated. She is a solid bowler in the 10th frame.”

Coach of the Year – Jeff Connor.

“Alyssa possibly had the best strike ball in the conference and had the fourth highest average in conference play. She has been the most improved player on the team the last three years, finishing with a 170 average,” Connor said.

Ansteatt finished with a 148.8 average in her first varsity season..