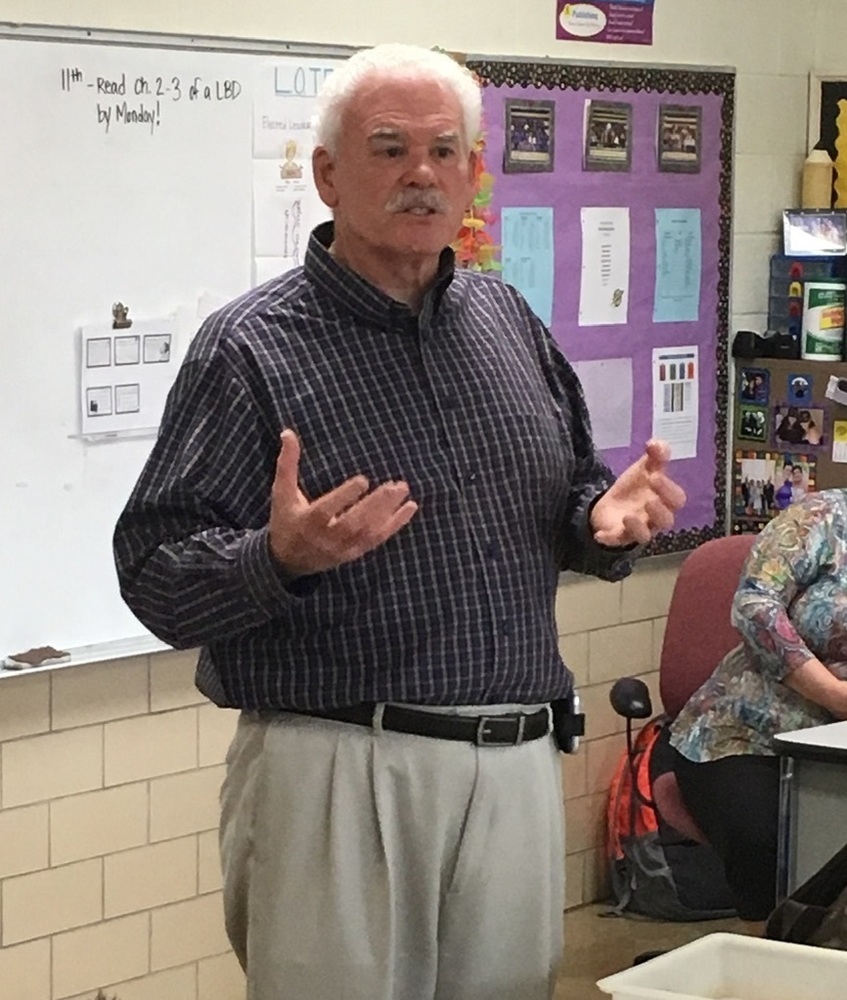 As he had every other week since September, Kevin Husted stood before a class of juniors at Clermont Northeastern High School. This would be different than the previous get-togethers, though, and Husted knew it. He also knew his audience.

“This is the best class of the year,” he told them. “You know why that is? Because it’s the last one.”

The students in Joy Cicchinelli’s English class laughed. Husted further endeared himself by passing around a tin filled with homemade chocolate chip cookies. At this point, they were literally eating out of his hand.

Husted, a Loveland resident and professional photographer, then focused on the message of the day, the message that would tie together seven months of discussion as part of the NaviGo program used by the school to help students at least begin thinking about where they go and what they do after they leave CNE.

He then drew on a whiteboard representations of two of his four daughters, Heather and Lindsay.

“Those two young ladies came to me and said, ‘Dad, can we talk about what we want to do?’ and I said, ‘Sure. I’m sure you’re going to talk to me about the college you want to go to and you want to become a doctor or you want to become a veterinarian or whatever,’ and we want through that conversation and they said, ‘No, that’s not what I want to talk about.’ I said, ‘OK, let’s talk about it.’ And they were juniors, about your age. Lindsay says, ‘I want to be an opera singer.’ I said, ‘You do? How does that work into a family experience and how does that work into taking care of grandkids and all that sort of things?’”

“This is my daughter Lindsay talking to me when she was 16, 17. She’s now 40,” Husted said, eliciting shocked responses from students thinking the energetic and personable Husted couldn’t possibly have children that age.

“She went to the university, Brigham Young University, and she majored in vocal performance, and I thought to myself, ‘So you go and audition, right? How does that work?” and she said, ‘Well, dad, you go on auditions and they accept you into the program based on the auditions. If your audition stinks, you don’t get into the program. It’s like the one final, that’s it, type of experience.’”

Eventually, he did. More than one job, in fact. Husted was an executive for Wal-Mart, Safeway and Kroger before starting his photographer business, McIntire Photography, in 2006.

“I ended up in the grocery business for 25 years, working for some of the largest companies in the world, and it really was an amazing experience. None of which I could have figured out on the front end,” he said.

Lindsay and Heather did just that. Lindsay was accepted into BYU, has performed in at least seven operas and teaches vocal training. Heather studied piano pedagody at BYU and teaches out of her home, with a three-year waiting list of students. She also judges Ohio Music Association competitions.

This is the third year CNE has used the NaviGo program, but the first time it has been aimed at juniors instead of seniors. Husted, who also mentors students at CNE and other county high schools, suggested the change to CNE High School Principal T.J. Glassmeyer.

“We started with seniors, and it was more difficult with the seniors because they had already formed paradigms in their mind, and they believed those paradigms pretty clear, and so a lot of what we talked about fell on deaf ears,” Husted said.

“This year I made a recommendation to Mr. Glassmeyer, ‘Why don’t we look at juniors, because the timing’s better for that envelope of dreaming, what I like to call the envelope of dreams, and we’ve had a much better response from the juniors this year than we’ve had in previous years.”

Glassmeyer said he was “shocked” at the end of his first year by how many seniors did not have a plan for after graduation.

“Two years ago we added mentors from the Clermont Chamber of Commerce and it has been a wonderful addition. The students have responded very well to their guidance and it has helped the students understand the importance of the work,” Glassmeyer said.

Cicchinelli said the program is well-timed and relevant.

“NaviGo has been a wonderful experience for the juniors as it provides time built in to their busy lives to intentionally think about and plan for their futures. The NaviGo leaders helped the juniors think about important things like saving money, future goals, building a resume, applying to colleges, or finding jobs immediately after graduation,” she said.

Husted and the other program leaders use a suggested curriculum suggested by NaviGo, which has evolved to rely more on conversations with the students.

“As an example, it was much more down low from the teachers to the students, and my recommendation was I’d rather you give me questions about the subject matter, give me two or three minutes to deliver a subject, and then 14 or 15 minutes to talk about what they’re thinking now that you may have heard what they heard, and you saw how we did that today, where I would just throw questions out. ‘What do you think? What’s the one word for what we learned and how did this work for you and as a result we got really good feedback. Nobody was not willing to raise their hands and give me feedback,” Husted said.

They were also unafraid to ask for more cookies.