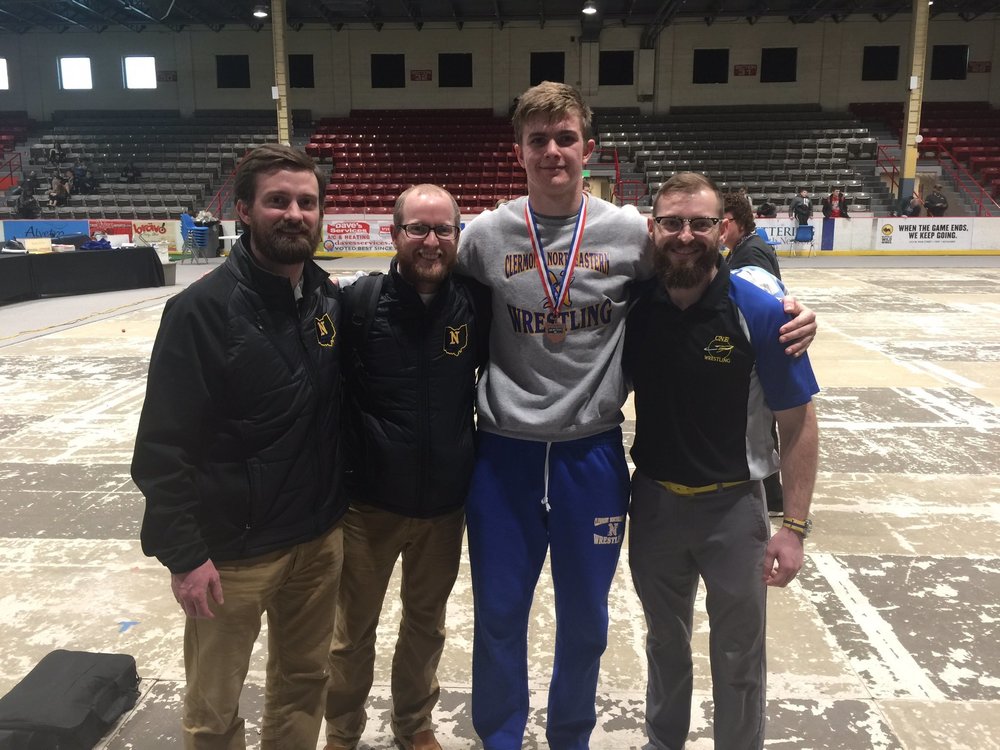 Clermont Northeastern High School takes great pride in its wrestling program, and this year Pride was at the forefront.

Senior David Pride qualified to the Ohio High School Athletic Association Division III state tournament at 182 pounds. While he didn’t have a chance to compete for a state title (other than swimming and bowling, all OHSAA winter postseason tournaments were cancelled by the coronavirus outbreak), Pride concluded his high school career with a season to remember. He was Southern Buckeye Athletic and Academic Conference Co-Wrestler of the Year, placed second in the sectional tournament at Reading High School and fourth in the district tournament at Troy. Overall, Pride finished 40-10.

Coach Scott Wells said increased confidence was one reason Pride was able to dominate. Work ethic was another.

“David is just a hard worker. He isn’t flashy that hits big moves, he is just methodical and always stays in good position. He is the epitome of what hard work can do for you,” Wells said. Pride would often bump up a weight class to challenge the best wrestler she could, even if it meant potentially losing the match. He began his CNE career wrestling at 152 pounds, moved up to 182 as a sophomore and dropped to 170 as a junior.

Pride, who also plays baseball and football, said his previous three years on varsity, as well as the coaching staff, prepared him for his senior season.

“My freshman year was tough, like it is for most freshman. I won a few more matches than I lost that year, but there were a lot of matches where I couldn’t compete with the stronger more experienced guys,” Pride said.

“Sophomore year I continued to get better and made it to districts. I lost my first two matches at districts, but it helped me see how much I needed to improve to be at the level I wanted to be at. I won two matches in districts my junior year and that helped give me some confidence going into the next season.”

He credited competition with teammate Luke Rayburn. Both were competing for time at 170 when Pride was a junior and Rayburn a senior, in 2018-2019.

“Senior year I came into the year with going to state as my main focus and tried to make sure I was doing everything I could to get there,” Pride said. He recorded his 100th regular season victory Jan. 14 against Williamsburg.

“It did not surprise me that he qualified (to state), it did surprise me when his confidence went to the point that he knew he could qualify. That is the hardest part of the sport is to get to the point that you actually believe you are as good as everyone else. I think David realized it after the first match at districts which is a great time to get that confidence.”

At district, Pride defeated Brookville’s Luke Williams 6-2. Williams entered the match 41-5. Pride then beat Zachary Simpson of Bath 5-4 before losing in the semifinals to Jaron Patterson of Mechanicsburg 3-2. In wrestle backs Pride again topped Williams, 3-1, before losing to Simpson 5-2.

“I had faith in him for years now, but it was a districts when I saw him believe in himself and wrestle the best I have ever seen him wrestle,” Wells said. “He shined on the big stage, which is when I watch a lot of kids let their nerves get the best of them. It is really cool when you see it all click like you had never seen it on the biggest stage of their career.”

Wells said Pride was understandably disappointed that his season was cut short.

“He is the kind of kid that realizes that adversity isn’t what defines and that your response to adversity is what defines you. I don’t know how he would have done at state, he does do best when the pressure is on and his confidence was now matching his skill set which would have made him dangerous,” Wells said.

Cancellation did not come as a shock to Pride, who said he expected that might happen as news events evolved.

“It still hurt when it was officially canceled. I was really excited to walk out of the tunnel and wrestle in front of a huge crowd and experience what the state wrestling tournament is like,” he said. “It hurt at first, but I realized it didn’t take anything away from the fact that I completed my goal I made it to state and that was what mattered to me most. The fact that I was able to set my mind a on a goal and work to achieve it was the most important thing to me.”

Three other returning seniors helped set the tone for Rocket wrestling in 2019-2020. Tyler Conley (132), Albert Corey (160), and Max Ansteatt (285) were all “high character people and made coming to practice fun and a special place to be,” Wells said.

Ansteatt showed his leadership at the Bob Guy Invitational at Williamsburg. CNE won the 11-team tournament and had the team championship locked up before Ansteatt’s final match, but Ansteatt “said he had to win his championship match for us to win and he came through beating a kid that he had never beat. That was a turning point in Max’s mindset,” Wells said.

The team performance at Williamsburg reinforced Well’s belief that this team could be special when at full strength. Injuries, though forced shuffling throughout the season.

“So even though it was a very successful season we could have accomplished even more.  That is exciting knowing how much these kids keep improving and how much fun they have for our future of our program,” Wells said.

Several underclassmen will move into leadership roles in 2020-2021. Wells said freshman Colby Johnson (106), and sophomores Zach Case (113) and Jacob Groeber (145) will have “targets on their back” after their performances this season. Johnson was a sectional champion, Case a sectional runner-up and Groeber a district qualifier.

Wells, who was named Southwest Ohio Wrestling Coaches Association Division III Coach of the Year, said this team was the most enjoyable group of wrestlers he has been around.

“They started every practice in a great mood and played around, but as soon as we started drilling it became serious and down to business. I think that come from the seniors that have been there for awhile and have understood that hard work can get you where you need to be and winning is the fun part of athletics,” Wells said.

He also credited assistant coaches Ben Waldman and Taylor Shinkle. “They work so well with the kids and we would not be on the trajectory we are without those two,” he said.

Dual record – 14-22. Seven of the losses were to out-of-state competition.