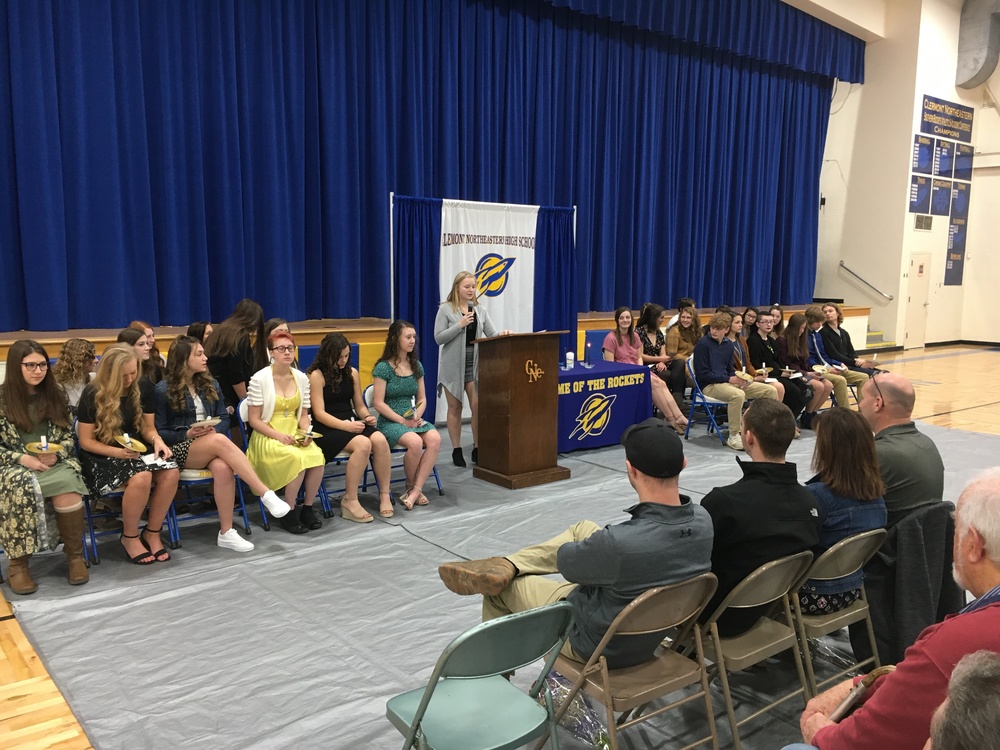 The best leaders often don’t see themselves as such, which is one characteristic that makes them just that.

Allyn Gum and the other 11 Clermont Northeastern High School students who were inducted into the school’s chapter of the National Honor Society March 12 had their leadership qualities recognized, formalized and validated.

“I think it’s important for everyone to see the outcome of these student’s hard work, and it gives some of our ninth- and 10th-graders something to aspire to,” Glassmeyer said. “It shows the importance of academics, and that’s what we’re truly about here, helping every kid to grow academically and achieve everything they want academically.”

NHS inductees were “tapped” for the honor the day before the ceremony. They marched into the school’s gymnasium, down the ramp at center court, accompanied by seniors inducted the prior year. CNE National Honor Society President Gracie Minton welcomed the inductees and led a ritual which included officers speaking about the four pillars of NHS – scholarship, service, leadership and character – and lighting candles symbolizing each. The new members then also lit individual candles from the four main candles, and pledged their oath.

“It’s very similar at all schools. The candles and the procession of the candles, that’s a national thing, so we all do that,” Sullivan said. “We do it during the school day. Some schools do it after school. And then the things like the speeches, I encourage the kids to lead the ceremony. Some schools will have the advisor lead, but my officers have to make a speech and they need to run the thing. I think it’s good to make it their project.”

According to the National Honor Society web site, www.nhs.us, membership is open to students in grades 10 through 12 with a cumulative grade point average of 85 or better, B, or 3.0 on a 4.0 scale. Schools have the option of requiring higher GPAs, and CNE does that. New members must have a 3.5 GPA.

Interested students receive a packet of information. The application process includes writing an essay, performing at least 10 hours of community service and presenting themselves as a leader. A committee of five teachers scores the applications based on a rubric; students who score 15 or higher are invited to join.

“These are some of the brightest, hardest working, most dedicated students we have, and many of them, they started working to get into the National Honor Society their freshman year, so this is a culmination of any years work and they deserve a lot of praise for achieving it,” Glassmeyer said.

While many of her fellow NHS members, both new and old, identified Gum as a future group president, she was at a loss to describe her leadership qualities.

“I don’t really know why people say that. I’m still trying to figure some of that out myself, because to a degree I feel like I’m still even learning about myself. I know when there’s new students I try to step up to the plate and help them out. I guess if that makes me a leader …”

Helping new students was one of the focuses of Gum’s essay. She performs her community service at the Owensville branch of the Clermont County Public Library, which is near her home. She is also a member of the CNE band, playing clarinet, trumpet and “a little bit of piano that I taught myself.”

“It would be a great opportunity. I’m wanting to go to college after I graduate, so I’m hoping that this will help to actually help me out with that since it will give me some stuff that I will probably end up using when I head off to college,” she said. Gum has not selected a college yet, but has a list of schools she is considering. She plans to major in music, or perhaps an animal-related field such as animal trainer or oceanography, and says she may have to start at one college and transfer to another.

“National Honor Society is still very important because, one, when you put it on your application, it does show that you have, that you are an exemplary student to a national board, because NHS has national standards, but it also gives the kids opportunities to do philanthropy projects that they might not have had the chance to, they get to lead their fellow students on projects that maybe they wouldn’t have joined if they weren’t already in NHS. They get to take pride in their school more,” she said, recalling when she was a member in high school.

“Actually I did not think it was going to be a big deal, but it was a very fun experience. A lot of leadership opportunities, like I said, in our school, and I think that’s what I am very dead set on making them do things for the school, making sure they’re involved, because when I was in high school, they was the only chance we got to speak or lead a ceremony was their NHS.”

A day after learning she had been accepted, Gum was still having trouble believing it.

“At first I was kind of confused. I had to re-read the letter several times before it fully processed I actually made it into this. It was a real shock to me,” she said.