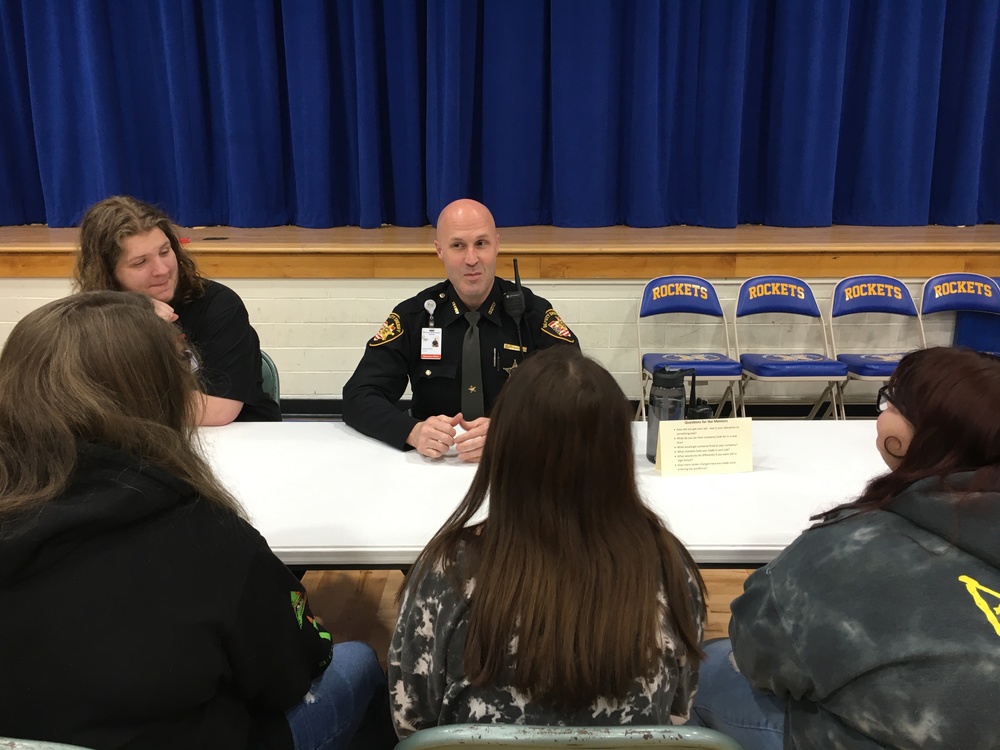 Stacey Sandfoss is that voice she wishes she had heard 30 years ago.

A 1993 Clermont Northeastern High School graduate, Sandfoss is the pharmacy relationship manager for Fitzgerald’s Pharmacy, which is not exactly the career she envisioned in high school. Then, she wanted to be a veterinarian, or at least that’s what she told herself, and no one tried to talk her out of it or guide her to other careers. She returned to CNE Feb. 11 to assure current sophomores that wandering off what they envision as their planned path is OK.

The school hosted a “speed mentoring” event, in cooperation with the Clermont Chamber of Commerce and its Workforce Ready Initiative. Tables were set up around the perimeter of the basketball court in the school’s gym. Sophomores divided into groups and spent seven minutes with each mentor, asking questions or just listening to advice.

Sandfoss was one of 15 mentors all delivering similar messages – while it’s never too early to start thinking about where you want to go after high school, it’s also never too late to change that destination.

“I tell them myself I wish that someone would have told me it was OK to not have to stick with what I chose at age 15, but I felt intimidated that I told so many people that I was going to be a veterinarian, when really that wasn’t what I wanted to do, I just didn’t know any other job that I could do within that field, because being in a small town it’s hard, we don’t have a lot of other people to talk to or mentor,” Sandfoss said. She got a degree in veterinary medicine from Ohio State and worked in the field for 12 years, mostly on the management side.

“I tell them often if they take a class that is out of their chosen major, but they like it, take one more class. Make sure you like it, consider that before you switch a degree, but also give it a fair shake to also think maybe I could switch my degree and have a different path,” Sandfoss said.

At the table to Sandfoss’s left, Steve Caudill was participating in his first speed mentoring event. Caudill is a human resources talent acquisition specialist for Frisch’s Big Boy. His degree is in history.

“You may not know what you want to do in life, and your path may go opposite of the direction that you thought it was going to go. I thought I was going to be a history teacher and I ended up in HR somehow,” he said.

Adaptability is one of the main messages of the speed mentoring program, according to Chamber Director of Development Heather Frye. She spoke to the assembled students before the event began, asking how many knew what they would be doing after high school. The Chamber has “six or seven” speed mentoring events already scheduled for 2020, and is setting up others, Frye said.

Clermont County Public Library’s adult service specialist, Mark Hansman, has done every speed mentoring event at CNE, as well as others across the county. A Milford resident, he has worked with CNE students and families in his job at the library as well as through St. Andrew and St. Elizabeth Ann Seton parishes, where he has been a booster president, basketball coach and football coach.

Hansman saw his role in the process as offering students another perspective.

“The value of this event is putting them in front of people who are not their family to ask questions that they don’t feel as free to ask Mom and Dad,” Hansman said. “Your parents are going to be a great resource for you. They’ve got great answers for you, but if you’re looking for an outside experience of what has gone on with other people, here’s an example of what has happened and what I have done through my career path. Rights and wrongs, mistakes, choices I’ve made and things like that.”

The Chamber also offers one-on-one mentoring to high school students. Cynthia Isaac Macke works with that program. She is the project manager for the Work Readiness Initiative. At the beginning of the school year, students are assigned to a mentor, who commit to meet with the students at least once a month, and keep in contact between meetings.

“And so that really helps the students have these good messages that they’re getting from their parents, from their teachers, be reinforced by somebody else who is a business professional out there that can be reinforcing the same message and help them with things like what are employers looking for,” Macke said.

One of those messages: be on time. Sandfoss echoed that in her discussions.

“Show up, be on time, work hard, work well with other people,” she said.

“What you do today will affect your tomorrow. I promise,” Patton said, specifically mentioning social media profiles. “That’s what employers look for,” he said.

“Three years ago we had it where just did juniors and seniors, but by that time, some of them might have an idea of what they want to do, so now we wanted to get them a little bit younger so they have an idea,” Houp said.

Frye said schools determine which classes are involved, noting that some want to include freshmen while others want to have the program several times a year.

These mentors participated in the speed mentoring program at Clermont Northeastern High School: 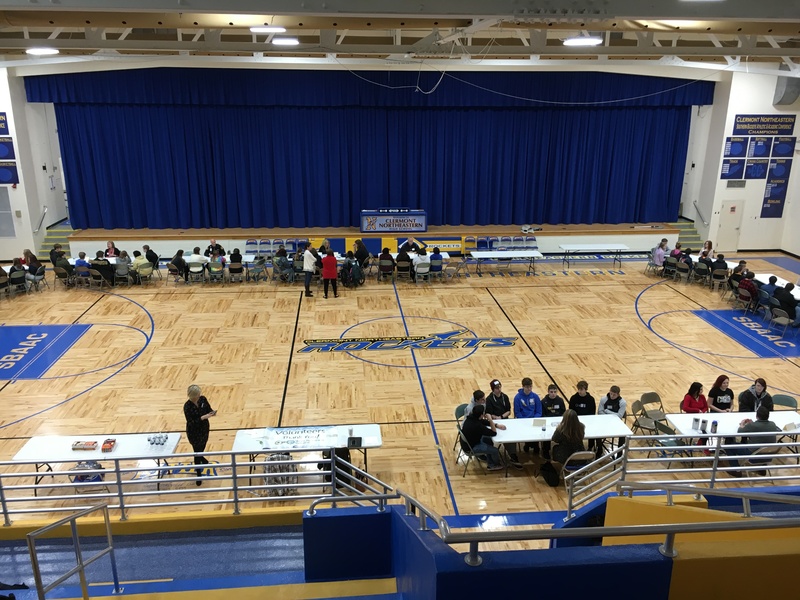 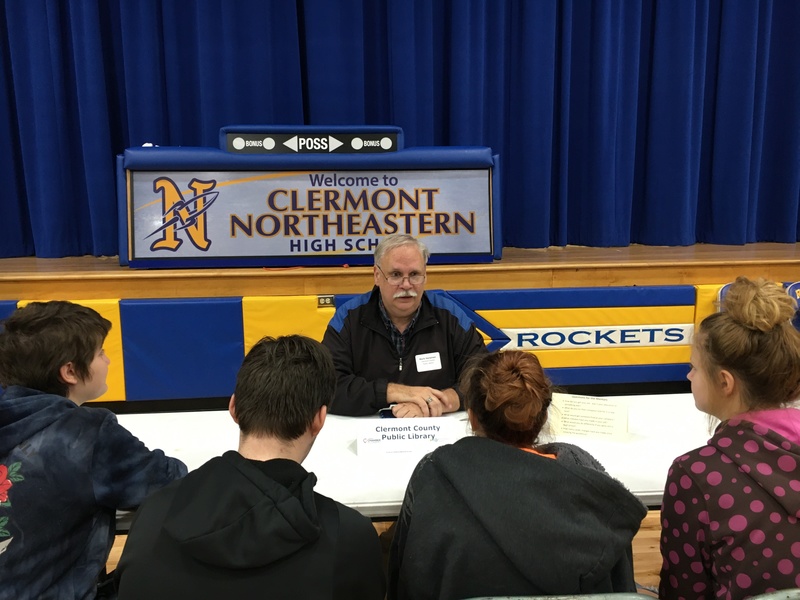 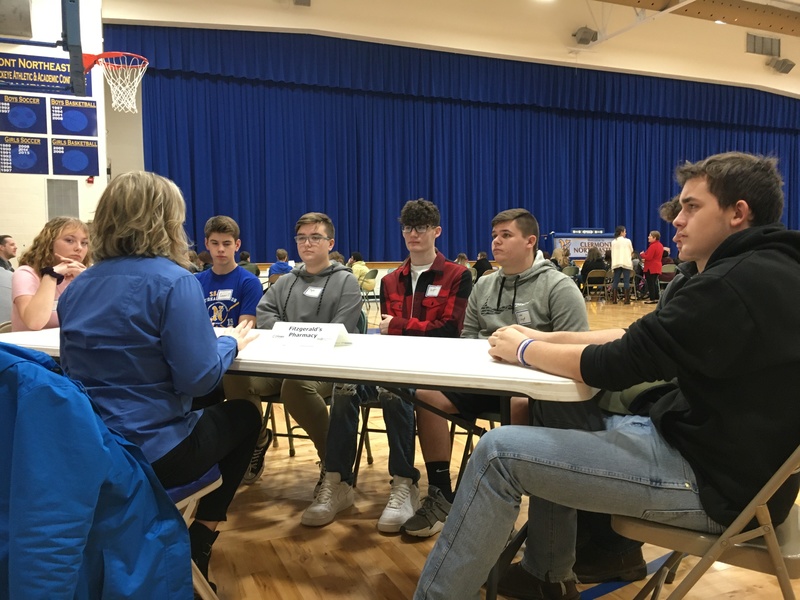