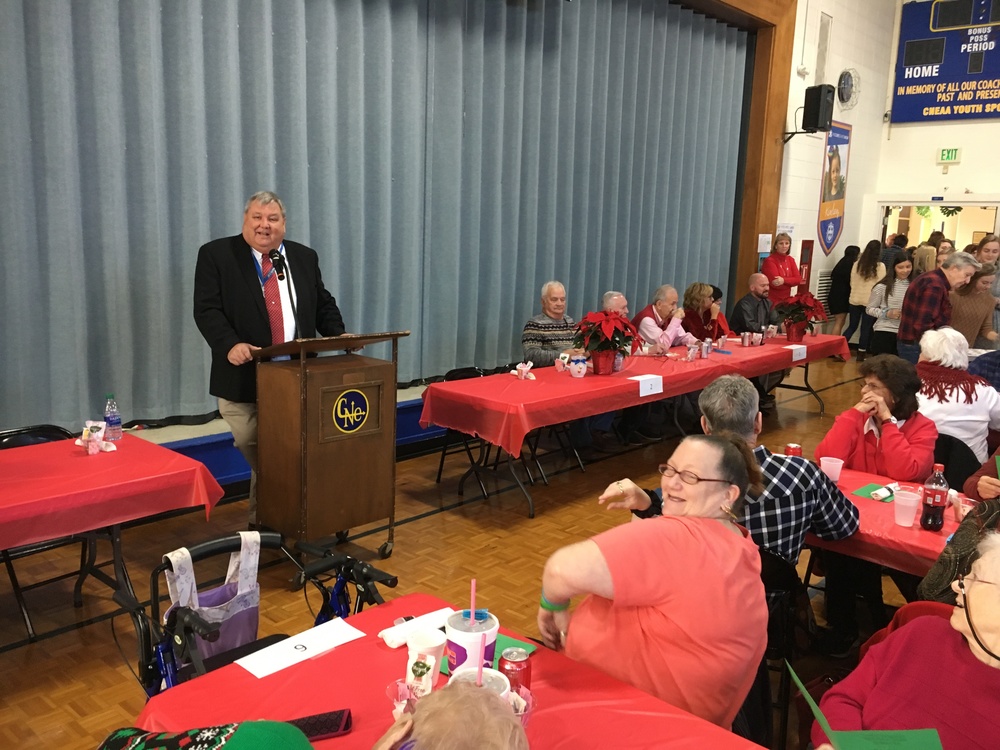 Viola Sibert has seen more than 90 Christmases, and still revels in the excitement of the season.

Wearing a blue jacket adorned with snowmen and snowflakes, Sibert, a Clermont Northeastern High School graduate, sat with her daughter, Susan Dyhouse, and son, Michael Sibert, at a table in the CNE Middle School gymnasium Dec. 4, listening to holiday music as they waited for the district’s annual senior holiday luncheon to begin.

CNE has hosted the luncheon since 1979 – this was the 41st event. Sibert has not attended them all, but it may now be on her annual calendar. She volunteers in the gift shop at Mercy Clermont Hospital, where someone reminded her that the luncheon is the first Wednesday in December.

Dyhouse and Sibert were attending their first CNE luncheon, at their mother’s invitation. Both are Clermont Northeastern High School graduates. For all three, the holidays mean family, and vice versa.

“Having all my family there,” Viola Sibert said, when asked why she likes the holidays.

“I knew you’d say family,” Dyhouse said. Mother and daughter share something else in common – both were Homecoming queens.

Michael Sibert is now retired. His memories of CNE are the “different people I made friends with.”

Wayne Johnson is not Santa Claus, but he has been around for every CNE senior holiday luncheon. He started with the district 41 years ago, and now helps organize the event. He is the master of ceremonies and main gift giver, presiding over the awarding of door prizes with a list that rivals any at the North Pole. This year, more than $2,500 worth of prizes – all donated – were given away; $1,500 of those were gift cards or gift certificates.

“(We have) great community partners. Just over the years that I’ve been doing this, we go out and just everybody … gift cards, you can’t imagine, when we start giving away things today, it’s going to take us about 40 minutes,” Johnson said.

“She just said she wanted to do something for the seniors in the district, so she put it together, and she had I think teachers paid for it. She’d write a check. They didn’t have a sponsor or anything,” Johnson said.

“I think that the seniors in the district look forward to getting together and coming into the school and seeing the kids work and seeing them perform. It really doesn’t have a whole lot to do with a free meal. It’s all about the fellowship they have and just the fact that somebody is recognizing them and having them in.”

“One year I had the parking lot guys and I lectured them before they went out, ‘Do not get in anyone’s car to drive it.’ Well, I look up and here’s one of our boys getting out of the car after they parked it, and I said ‘Why?’ He said, ‘He threw me the keys and said ‘park it,’’” Johnson said.

District nurse Lori Diekmann, who helps Johnson with the planning and door prize giveaway, was in the choir for the first senior holiday luncheon in 1979.

“That would have put me in fourth-grade when Mrs. Beamer was over at the intermediate school, so our art class made the table decorations and our music class was the performers, and my grandparents were actually there, on both sides, with the family,” Diekmann said.

“This is my 15th year back. I just love seeing all of the community people.”

Diekmann’s parents, Sonny and Jeannee Saunders, attend the luncheon, and this year, Jeannee won the split the pot, then donated the winnings, $291.50, back to the district.

This Christmas will be different for Ken and Betty Scott, who enjoyed the luncheon with friends. They are the great-grandparents of Kinley Sexton, the 6-year-old who died in May from a diffuse intrinsic pontine glioma – brain tumor. Both are CNE alumni. They visited the playground named for Kinley at CNE Elementary, where her photo is on a plaque on the side of the building.

“More than ever for Kinley now. It was sad seeing her picture there,” Betty Scott said about why she was there. The holidays this year may be even more meaningful to them.

“Seeing the grandkids, great-grandkids, still believing in Santa. It’s sad this year. And Ashley, Kinley’s mother, they just got a new tree, and it’s white with all purple trim, because that’s her favorite color, so that’s different.” 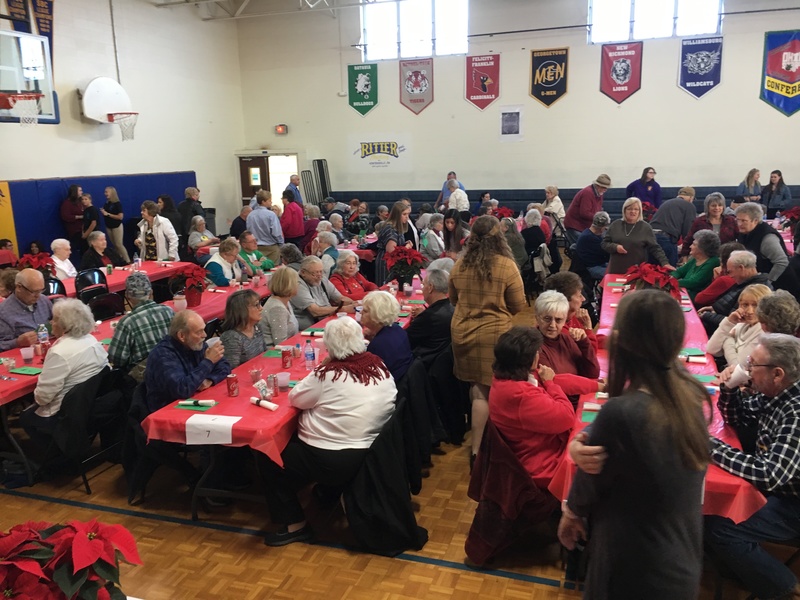