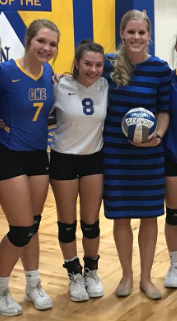 Having established itself as the best athletic program in the Southern Buckeye Athletic and Academic Conference’s National Division a year ago, Clermont Northeastern High School has no intention of giving up that distinction.

CNE won its first SBAAC National Division All-Sports Award in 2018-2019 and is setting a similar pace through the first portion of 2019-2020. The Rockets were regular-season champions in boys golf, finished second in football (tied) girls golf, girls tennis and volleyball, and third in boys cross country, girls cross country, boys soccer and girls soccer. The fall performance has CNE atop the All-Sports standings with 35.5 points, 7.5 ahead of second-place Bethel-Tate.

Points are awarded based on where a team finishes in the league standings, and on the number of schools that participate in that sport. Last year, CNE led Bethel-Tate by seven points – 37-30 – after the fall season.

Here is a look at each of the CNE fall sports:

Sophomore Summit Northrup was CNE’s top runner, placing second in the league meet in a time of 17 minutes, 44.88 seconds, and advancing to the Division II regional championships. He was CNE’s first regional qualifier since 2003. Another sophomore, Clayton Hodge, placed seventh in the league meet (18:41.14).

CNE won four meets, finished second in one, third in five, and fifth at district.

CNE also fielded a full middle school squad for the first time, with three first-place finishes, five seconds and one third. The squad placed second to Western Brown in the SBAAC. Individually, Lucy Sullivan was second in the league and Ellie Breitenstein fourth.

The Rockets alternated wins and losses in the first six weeks, then finished with three straight victories after an Oct. 11 loss to Bethel-Tate. In its six wins, CNE averaged 42 points per game and allowed 13.3; in the four losses, they averaged 12 ppg and allowed 31.

Individually, junior quarterback Landon Amann was the fifth-best passer in the SBAAC, throwing for 843 yards in nine games. Senior Cole Joslin averaged 129.1 rushing yards per game, second in the SBAAC. Senior David Pride was fifth in receiving yards with 440.

Finish: Second in league tournament (all SBAAC schools competed in the same tournament). Won the Dayton Christian Invitational and qualified for the Division II District Tournament for first time.

The Rockets won a Division III postseason game, defeating Purcell Marian 4-2 in the first round of the Division III sectional tournament. They lost to Mariemont 9-0 in the second round.

Defense carried the Rockets. They allowed only 21 goals, posting nine shutouts. Goalkeeper Alyssa Williams had nine shutouts and a .660 save percentage. She was voted All-Southwest District.

The Rockets were 1-1 in the Division III postseason, defeating Deer Park 1-0 and losing to Mariemont 7-1. Abbey Puckett scored 11 goals with nine assists (31 points), fifth best in the SBAAC.

“We had some great games this year and regardless of the outcome, I was incredibly proud of how the girls played,” coach Craig Yeager said. “They put for the effort and attitude during those contests that showcased the kind of team we are striving to be game in and game out.

“Our eight graduating seniors will be missed next year. They all contributed to the team on and off the field and leave many open positions to fill. We will have four returning starters, two returning captains and many others with time playing varsity. I look forward to the girls coming out ready to go, starting early and pushing each other to be at their best every time we step on the field.”

Coach Emma Keough recorded her 100th victory during the 2019 season. The Rockets’ only losses were to Mariemont, Cincinnati Trailblazers, Western Brown, Williamsburg (twice) and Seven Hills in the sectional finals. Fourteen of their 18 wins were in straight sets.

Carson Fishback was named SBAAC National Division Athlete of the Year and first-team All-District. She led the SBAAC in digs with 487 and finished her career with more than 1,000 digs – a school record. Lexi Eyre was second in the SBAAC in kills with 282. Makayla Drewry finished fifth in the conference in assists, with 459.

Fishback, Drewry, Molly Stetson and Elizabeth Lindsey were senior academic award winners for District 16 for having cumulative GPAs of 3.5 or above.

“This season was filled with so much progress individually and as a whole team. We focused all year on getting better every day and I truly felt that our final match of the season was the best product we put on the floor all year,” Keough said. “We made tremendous gains in our ability to finish close sets and matches. Despite coming up short on making CNE history by advancing to the District Tournament, I was extremely proud of the effort and commitment displayed by the entire team.