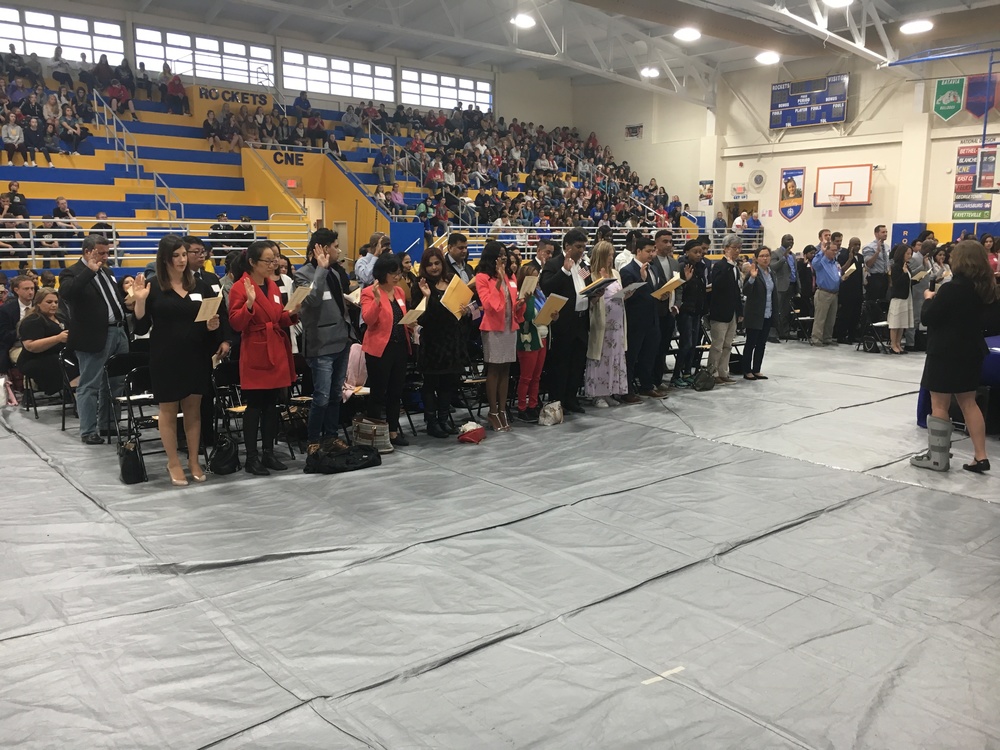 ​CNE is both final destination and first step on citizenship journey

CNE is both final destination and first step on citizenship journey

The moment itself is brief – less than 60 seconds of a ceremony that lasts about 60 minutes. There are no bells and whistles, no confetti falling from the ceiling, no tassels flipped from one side to another. Just polite applause. This is, after all, an official federal courtroom. The journey to get to the moment, however, is much longer.

Eighty people took the oath of citizenship at Clermont Northeastern High School Oct. 25, filling the first three rows of seats on the gymnasium floor as friends and proud family sat behind them, and students watched from the stands.

Jerry and Sally Pewitt came from Liberty Township in Butler County to support friend Mirabel Bih Oghombi, a native of Cameroon whom they befriended through their church, Springdale Nazarene. The Pewitts were sitting with Mirabel’s husband, Elvis.

“Mirabel and Elvis are part of the community of Africans that go to our church (Springdale Nazarene), so Sally and I have become very close to many of them,” Jerry Pewitt said. “She’s getting naturalized today because, well, they would both be eligible but they’re doing it one at a time because it’s too expensive to do it both at the same time, so we’re here today to support him, but we’ve been to many of these already.”

Sally Pewitt was wearing a red, white and blue U.S. flag replica scarf as she emphasized how Mirabel and Elvis have gone through the legal steps of citizenship.

“We come because it’s such an important milestone in their lives. They all come to this country legally and they work hard to be able to get their education and establish a lifestyle and a life here, working hard without government help and we just feel so proud of them for all they do. We just need to be here to support them and let them no how proud we are,” she said.

Mirabel said it took her three months from start to finish.

“Just because there are just some rights and just some duties that you can only do them if you are a citizen, and also just having, being able to do everything that you’re supposed to do as a citizen is just different than doing it as somebody from somewhere, being included in this family,” she said, adding that she is looking forward to being an involved citizen and becoming eligible to vote.

“That’s a way that I think my voice can get out there. That’s a way that I feel like I can also influence what is going on. I’m also, I’m just so excited, I’m part of a country now that is just truly free. I can contribute my ideas and people can also be there to shape my own opinions, because I’m coming from somewhere where you are not really allowed to say what you want to say, and influence and change things, so having that ability and being able now to speak out is very good.”

Patricia Lawrence of Miami Township was there to help new citizens such as Mirabel.  A volunteer for the League of Women Voters, she handed out information sheets and registration forms at one of the gym exits. This was her first naturalization ceremony.

“I loved it. I thought it was just a very powerful, wonderful thing today,” Lawrence said. “I think it’s important that everybody that everybody participate in politics and pay attention to the government and that they’re informed.”

Lawrence was also impressed with the student participation, which included National Honor Society members greeting visitors and distributing programs inside the school’s main entrance. Seniors Kennedy Brown and Melanie Moorhaus were among them.

“I thought it was really cool to see all with of these people from everywhere, and coming, this is such a small school and to have something like this that’s so big here I thought was really cool,” Brown said.

“I think it’s a good event because it’s just cool to see new citizens come into the country,” Moorhaus said.

University of Cincinnati student and West Chester Township resident Armia Nayrouz, 20, has been in the U.S. for seven years and began pursuing legal citizenship shortly after arriving.

“My whole family moved to the United States and it feels like a better place that we have here, it’s like better living,” Nayrouz, who is majoring in biomedical engineering, said.

“The most difficult part was probably the timing. It took a long time,” he said, talking about the pressure of the exam.

“It was like, you’d be a little bit scared because you’d been waiting that long, and that would be the exam that would decide if you would be a U.S. citizen.”

Nayrouz came to the U.S. with his family; Mitchell John Dennett became a citizen for the same reason. Dennett, 28, is from New Zealand, and met his wife, Emily, in 2014, shortly after entering the county. He works as a software developer at Great American Insurance.

“I came over here because I was in college and I took a year off … and met Emily and we had Zoe and I thought it was a good time to become a U.S. citizen,” he said.

“He knew that it was really important for our family. That was kind of the driving force,” Emily said as she held their daughter, Zoe. The family made the long trip down U.S. 50 from Delhi Township for the ceremony.

“It means a lot. It’s more like a physical thing that he’s going to be here with us. This is our home now,” Emily said.

Judge Karen L. Litkovitz understands. The Second District of Ohio magistrate is descended from Italian immigrants, and shared that story before she gave to oath to the new citizens. Her grandparents came to the U.S. in the early 1900s, with her grandfather becoming naturalized in 1926 and her grandmother in 1944.

“Ironically, two weeks ago I was in Italy and I went to the town where my grandfather was born, very small town, and I found his birth record from 1892, hand-written birth record, and it made me think how important the choice for him to come as a young man to the United States, the impact that has had on my life and the lives of my children, and how different it is because of that choice he made, so it’s really, I look at these people and I know there’s so much potential for them to achieve so much in this country,” she said after the ceremony.

This is the third time CNE has hosted a naturalization ceremony.