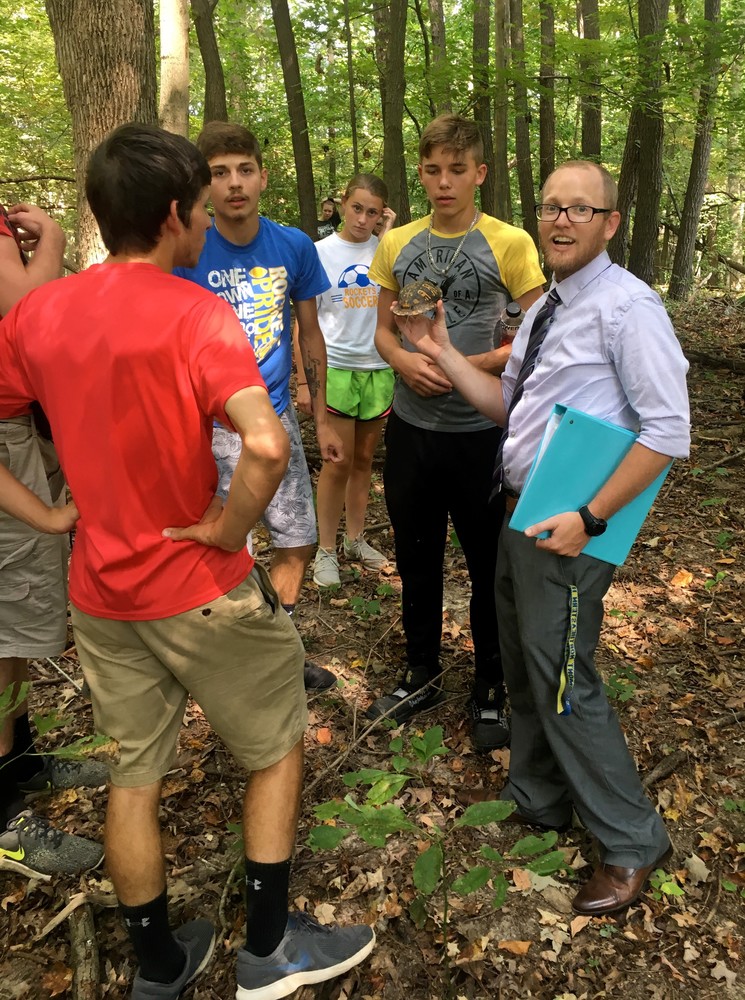 Trekking deep into the woods behind Clermont Northeastern High School as a thick canvas of trees tried to shade a noon sun, a group of students found Reagan at the bottom of a ravine.

At the edge of the hill overlooking the ravine, just off the path, others discovered Hank under some brush, shielding himself from the heat. Others reunited with Rylee, AB and Trev. They made notes about where they found their friends, took some photos, then headed back to the high school. Without Reagan, Hank, Rylee, AB or Trev.

Senior Dakota Brown, carrying what looks like a cross between a “classic” house TV antenna and a support for an old-style clothesline, holds Reagan, who starts to get gets impatient and struggles to get away, scratching Brown. Junior Jake Ansteatt

had carried Reagan from her burrow – although not from her home.

Reagan is an Eastern box turtle, one of 10 Wells’s class is tracking as part of its Turtles and Telemetry project.

“I think it’s cool because, they’re cool they just take their house with them. They just waddle up and curl up in their own little hole whenever they want and poke out and say hi,” Brown said. Wells identified Brown as one of the class’s more adept “turtle finders.”

Little is known about Eastern box turtles, but Wells and his students – two classes participate in the project – are determined to change that. The school received a grant to buy GPS systems, transmitters, radio antennae and receivers. When school began in August, they went back to the preserve, which is part of CNE property, not quite knowing what to expect. The 10 they are tracking are part of a population of more than 20 they have found, which has prompted students to want to pursue more grant money for the hardware, Wells said.

Turtles not on the list of 10 are recorded with a photo of their shell markings, which, like human fingerprints, are unique. The information is entered into a binder Wells carries.

“We have found out too that our population of turtles is very high here, which is very cool, and it’s a very high amount of males, which turtles are very temperature dependent on determining gender, so we’re not sure what that’s telling us yet,” Wells said, explaining that he and his students took on the project without any hypotheses or pre-conceived notions of what they might find.

They have learned, for example, that of the 10 turtles tracked, seven tend to stay on one side of the preserve and three on another. They have also found more males than females. Wells said turtle gender determination is influenced by temperature, but “we’re not sure what that’s telling us yet.”

“I didn’t think they would move as much as they do sometimes, because sometimes they will move really far. I think they said that one was over there yesterday, now it’s all the way over here,” Ansteatt said.

Even when they “run,” they don’t go far, which is one of the advantages of studying the species, Wells said.

“Some of them are hyper, they want to try to run around. Some of them just sit there, they just want to sit in their shell,” junior Dominic Meyer said.

CNE has developed a partnership with Miami University and the University of Toledo, and Wells said they will share data as the study progresses. West Clermont School District has a similar program that operates as a club and has been tracking turtles at Cincinnati Nature Center for 14 years. Wells said Milford and Sycamore also track turtles, but CNE is the only school that can do it on their campus.

“We have a unique ability to do this daily and actually collect a ton of data in shorter amounts of time,” Wells said. “It’s almost like graduate work. You start studying something and you don’t know what you’ll be studying, and they’re truly doing graduate-level work.”

Once the temperature cools and the days get shorter, the turtles will borrow deeper into the ground and the tracking will pause until spring. The study, however, will continue, as Wells said “I plan on doing this at least 22 more years, until I can retire.”

Junior Rachel Noonan named Hank, one of the 10 turtles. Students who originally found the turtles got to name them. The transmitters ands receivers operate on 10 frequencies, noted CNEAA through CNEAJ.

“The channel thing is on H, so we kind of come up with names, and Hank just popped into my head, so we named it Hank,” Noonan said. She, along with her classmates, enjoys the chance to get outside.

“I just like the interaction with finding the turtles. It’s kind of challenging at times and can be frustrating, but it’s worth it. I like it. It’s a lot of fun,” she said.

That is one of the side benefits of the study.

“I just can’t get over how unique it is and how these kids, I’ve never seen any of my science kids get so caught up in this and doing their own research on their own time and figuring things out on their own because I don’t know all the answers. This is all new to me as well. But they’re growing their own education,” Wells said.

These are the names of the 10 turtles tracked by Scott Wells’s zoology class at Clermont Northeastern High School: