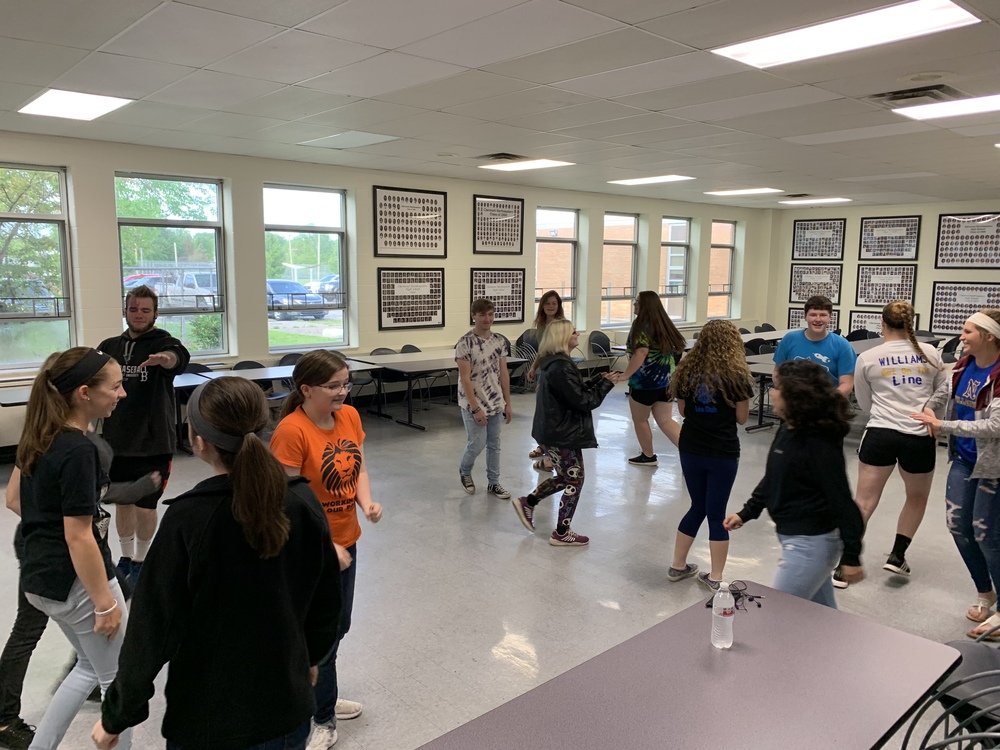 Clermont Northeastern High School freshmen are benefiting from an initiative that has impacted more than 11.2 million students nationally by building one-on-one relationships.

Link Crew is one strategy of The Boomerang Project, which helps students transition into middle school and high school. CNE has had a Link Crew for two years, and faculty coordinator Bernadette Wayne says the program is just beginning to make an impact.

High school Principal T.J. Glassmeyer chose Wayne, an English teacher, and another faculty member – no longer with the district – to attend training for the program in Chicago in 2018. They got a relatively late start. The training was in April, giving them about three months to get organized for the 2018-2019 school year.

“We called T.J. and we said ‘Do you know what this is that you sent us to?’ and he said, ‘Well, you know … the basics.’ So we explained it to him and then we said if we’re going to do this, we want to do it 100 percent right, but we’re very excited about it, so we took an extra day after returning from our training just to sit together and plan, ‘OK, how do we make this happen now? How do we do it the right way?’ because it’s one of those things we felt there’s no room for missing something, for error,” Wayne said.

Since the program is student-driven – mainly by juniors and seniors – Wayne had to find leaders. She asked faculty and staff for nominations, and encouraged them to think beyond the obvious candidates.

“We want kids who maybe their freshman year they slacked off, they struggled, and then they really realized the importance of it, they got it together, turned things around, and they want to show someone else, ‘Hey, don’t make the mistakes I made. This is how you should do it,’ or ‘This is what I can tell from experience works.’ And then that way more people can relate to those leaders,” Wayne said.

Link Crew leaders are paired and assigned to groups of freshmen. This year, there are 14 leaders for a freshman class of just more than 100 – a ratio that Wayne called a “magic number.”

Leaders meet in May and go over points of emphasis for the next school year – items such as setting games and activities for freshman orientation and compiling a list of things they wish they had known when they started high school. Even though most CNE students have been in the district since kindergarten, and the middle school and high school are only a couple of hundred yards apart, the move from one to the other can cause anxiety.

Senior Albert Corey said he became involved with Link Crew, “because I didn't get the warm welcome into high school and I didn't get that help as a freshman. I learned that being a freshman might sound easy, but its really not because you have a lot on your plate and there is a lot of school work, and other sports or extracurricular activities and its stressful. So I wanted to be a link crew leader so I can help freshmen be less stressful or just help them in general be a friend to the freshmen.”

A few days before orientation, leaders call their assigned freshmen to introduce themselves and remind them about the event, with the goal of creating excitement and enthusiasm while modeling leadership.

“We had general orientation where I lead an assembly of activities,” Wayne said. “The leaders participate with the freshmen and help when I need them to organize groups and stuff, and then at the end of my assembly, all of these small groups get together and go to various classrooms around the building and then they do a session where adults are not allowed in the room. They learn each other’s names. They play different games along with that, and then the final activity they do before they go on school tours is what they considered the heartbeat of the program, teaching them that there’s someone there to show you the ropes, and listen to the right voices telling you what to direction to go.”

Crew leaders will stay in contact with their freshmen throughout the school year, and Wayne is planning other activities such as a freshman-only mini pep rally. Last year, they had a pizza party shortly before winter break.

“We had movies and card games and pizza in the choir room. We talked about doing maybe, especially if we get a grant that we applied for, taking a bus for the freshmen to away football game or away basketball game for that spirit aspect for sports,” Wayne said.

Looking further ahead, Wayne said the third year of the program is crucial, in part because Link Crew leadership starts to become self-sustaining. Students who were on one end as freshman want to continue the tradition, Wayne said. She also wants to build on academic follow-up. Now, leaders learn a monthly lesson and run activities in freshman classes. Each activity concludes with a moral or theme. A program called Link Alerts will connect struggling freshmen with leaders who have gone through similar challenges. Link Awards will provide teachers a way to recognize freshmen and Link leaders.

“The Link Crew has done a great job helping ninth-graders transition from the middle school to the high school through our freshmen orientation and regular meetings with student mentors. The program has had a tremendous impact on our school community and we look forward to its continued success,” Glassmeyer said.

Wayne listed some of the items Link Crew members see as important for incoming freshmen – some serious, some humorous:

• “Don’t be afraid to ask for help. And if you don’t understand, say something.”

• “Even if it’s hard sometimes, struggle is good, so push through that.”

• “Walk on the right side of the hallway so you don’t get run over.”

• “There’s no pool on the roof, so if someone tries to tell you, don’t believe it.”

• “A very common one was just do your work and follow directions and you make it a lot easier on yourself just to follow the expectation.”