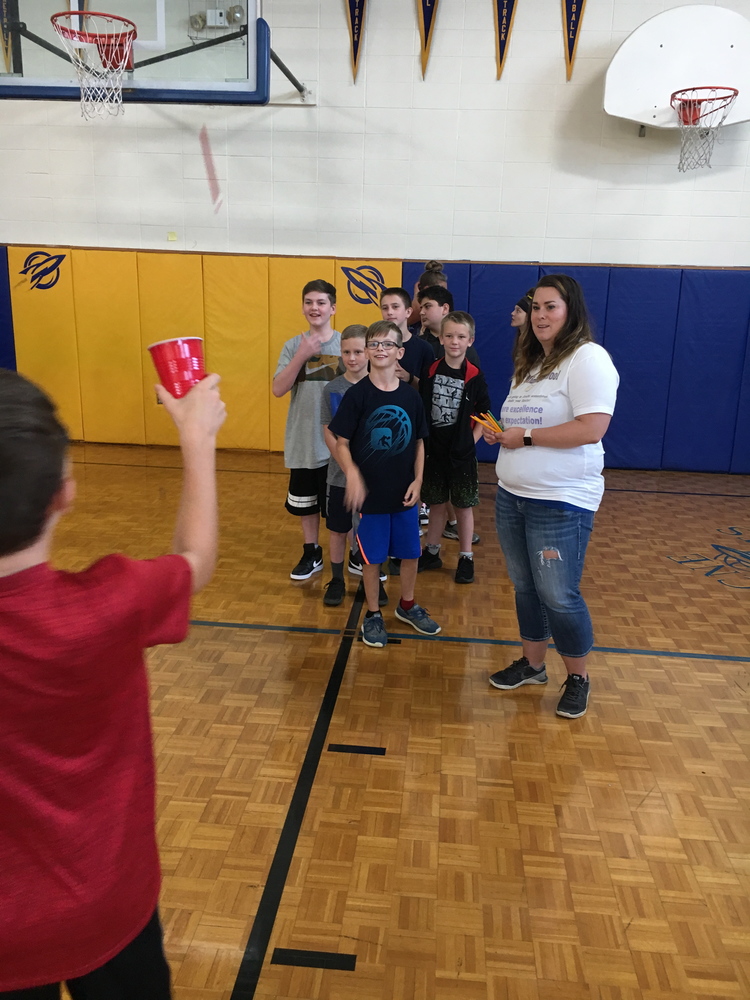 Clermont Northeastern Middle School students were fewer than four hours into the new school year when they were called – for a second time – to the school’s gymnasium.

The first gathering was all business. The second was fun and games - eventually.

Principal Laura Nazzarine and Assistant Principal Chuck Boothby met with each grade in the morning in what Nazzarine termed the “Ways and Means assembly,” during which they discussed behavioral and academic expectations.

“We’re encouraging our kids this year to practice extreme ownership, meaning they take responsibility for not only their behavior but also their academic expectations and set goals for themselves,” Nazzarine said.

She and Boothby had arrived at the school at 6:25 a.m. Aug. 19, placing cones in the repaved and restriped parking lot to designate a new traffic pattern. Teachers had worked over the weekend to prepare. Students filed into and out of the cafeteria beginning at 10 a.m. for their first lunch – cheese coneys the featured menu item.

Then, around 11, a quiet storm broke the calm. It was part of the plan.

Motivational speaker Nick Jackson and his team had prepared the gym, cafeteria and STEM (science, technology, engineering and math) room for the activities as part of their #iamspeaklove program. Faculty – all wearing this year’s themed Tshirt with the words “Excellence: If we believe it, we will achieve it,” led the students in and seated them in the bleachers. Jackson, who knows how to command a room (he spoke at the district’s professional development day Aug. 16), quickly got everyone’s attention before dismissing two grades – silently - to the other venues.

Students who stayed in the gym played a series of games – a balloon challenge where each student had two balloons and had to keep them in the air as long as possible; stacking and passing Solo cups to teammates; using a straw to move Skittles from one end of a table to another; throwing pencils into a container held by a classmate, and picking up ping pong balls with pencils held like chopsticks.

In the STEM room, students wrote a negative word on a sheet of paper and taped it to their back. Others than walked around and wrote positive words on the paper. Students then rotated from room to room. Jackson would repeat the program in successive days at the high school and elementary school.

CNE Middle School has a “Be The Difference” Club, and Nazzarine said Jackson’s presentation aligned with school objectives.

“A couple of years ago we did ‘Re-Do’ Day and we also have our Be The Difference Club, which is all about changing the culture of our community. I think Nick plays right into that without adding something new,” she said. “His message of speak love and empower, step up, be the change you want to see in the world, fits right into what we’re already doing, so I’m excited for him today, I’m excited that it’s the first day of school.”

A few hundred yards away, at the high school, Principal T.J. Glassmeyer reflected on an “amazing start” to the school year.

“I’m always surprised how well it goes. Every year we have an amazing start. The start of fourth bell the hall was completely quiet and everybody was in class learning. We’re going to have a great school year,” Glassmeyer said. He and Assistant Principal Scott Houp walked the halls, shaking hands and exchanging high-fives with students.

He credited the school’s Link crew, which organized freshman orientation.

“That helps get our freshmen acclimated to the building and used to being in the high school, so we don’t have a lot of issues the first day. Everybody knows where they’re supposed to be. We do lot of prep work with our freshmen so they can hit the ground running,” he said.

“As a part of our new initiative ‘best first day of school’ challenge we asked parents and teachers to write welcome notes. Our goal was that each student has a welcome note on their desk for the first day of a school,” she said. “The response from parents was amazing and the kids enjoyed their notes.”

“This year we are making a bit push to get students to school and in classrooms no later than 8:45 (a.m.). Each class is challenged daily to have ‘Rockets Ready to Learn.’ If we reach our goal of all students at desk and on task at 8:45 we will add 75 minutes of learning time to each full week of school. Imagine the impact this will have on our students!”

Nazzarine, who is in her 28th year of education and third at the middle school, described the day as “awesome.”

There are 460 students at the high school, 344 at the middle school and 618 at the elementary school.