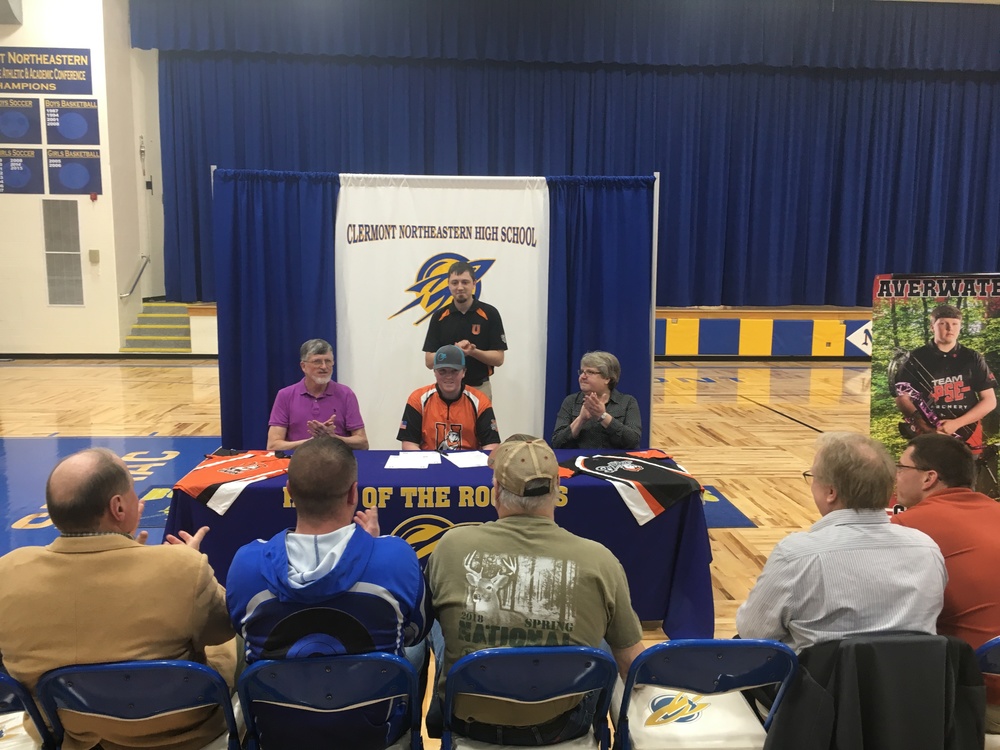 Sharon Averwater was sitting at a table in the Clermont Northeastern High School gymnasium, her son and husband to her right, friends and family in front of her; enjoying the moment, even as it briefly overwhelmed her.

Her son, Tommy - her only child - was the focus of attention, signing an archery letter-of-intent with Union College in Kentucky, and Sharon Averwater made sure that everyone responsible for his success was properly recognized.

“I think it’s important for you to know in a sport like this that is not part of a school sport that there’s a lot of people that back the kids, and it’s very important for me to tell you all this,” she said, her voice breaking. “There’s a lot of men from the archery club and the store … that have helped him a lot through the years, and it’s really important that they know how much this means to us.”

She then invited everyone to the family home for dinner.

The Feb. 25 signing ceremony was the first of several notable events for Tommy Averwater that week. On Thursday, he and fellow CNE senior Doug Morgan went to Lima to compete in the Ohio Agricultural Power Diagnostics state competition, where they finished fourth. Saturday, he represented CNE at the Ohio High School Athletic Association Division II State Bowling Tournament in Columbus. He finished 36th overall with a three-game total of 608, in a field of 193 bowlers.

This day, though, was about archery, and a student earning a college scholarship in a sport not offered at the high school level, but in which he’s been interested since the age of 5.

“He started from going to a (Ohio Department of Natural Resources) show and they had a trailer set up and they were letting kids shoot the archery bows and arrows, and he was little, and fell in love with it, so Christmas time we got him a bow, gave it to him from Santa Claus, and it just took off,” Sharon Averwater said.

“I’ve just been hooked ever since,” Tommy Averwater said. “I started out hunting, and then it took off into target archery. Some of the guys at the Broken Rack archery shop, they said, ‘Hey, why don’t you go try to shoot some tournaments?’ because they knew I was a decent shot, so I was like, ‘Alright, we’ll try that,’ so I went to one in January to begin with and I ever since, this was about four years ago, and ever since I started doing that, it was a blast, to me. It’s different.”

His proficiency caught the attention of Union coach Cody Kirby, who was looking to replace five seniors from this year’s team. Kirby started the union archery program four years ago.

“You’ve got to get creative when you do recruiting, so where he competes in the international bow hunters organization, I was able to get on their web site, and fortunately they had some divisions divided by age, and so I was able to get on there and saw that he was passionate about it because he shot several events, and saw that he was talented because he finished well, so made initial contact and kind of got the ball rolling from there.”

Tommy, who was at the world championships in Snowshoe Mountain, West Virginia, when Kirby reached him, said he knew about college archery and was familiar with the Union program. Still, the interest surprised him.

“I had heard about college archery and I knew a little bit about it,” Tommy Averwater said. “I was thinking more UC Clermont, local stuff, because I didn’t think I’d have a chance with archery and college, but then he messaged me, so I went down there, and we got a tour of the campus, and I got to meet a few of the players, and we talked about scholarship, and then a couple of weeks later they actually had a big outdoor national tournament about 30 minutes from their school, so we went down and watched that. He invited me to it. When we were getting ready to leave, he pulled me over and let me meet all the members of the team. It just, it felt like home.”

“I knew in the back of my mind that this is what I wanted, but I wanted to make sure first before I decided,” Tommy Averwater said. “It just, I mean when we went down there, it felt like home, because it was a small school, I wanted to go to a small school, and they’ve only got, I think, 1,200 students.”

His parents, who attend all of his competitions, noted a bond between Kirby and the family, and supported Tommy’s decision.

“I think when Tommy went down there, the school was small, and it’s a Methodist school, we go to a Methodist church. He just really felt at home. It was home,” Sharon Averwater said.

Tom Averwater, Tommy’s father, said his son is following in his footsteps as an outdoorsman.

“I hunt with a crossbow - bow and arrow,” Tom Averwater said. “This year he shoots in a match for an organized meet every Wednesday night at the archery club. Last year it was two or three nights a week at the archery shop.”

Tom Averwater joined the Golden Hawks Archery Club in Bethel so Tommy could participate as a minor. Tommy turned 18 Feb. 14. The two are part of a group that go hunting in Oklahoma in the fall.

“We like to go out to Oklahoma, because we’ve got a pole barn out there that’s kind of set up with beds, and it’s got a full kitchen in it. You just sit around and talk and the stories and the memories you make is the biggest thing,” Tommy said.

When Union’s season starts in the fall, Sharon and Tom will most likely be there, - though it means Tommy won’t be around to help work the family farm near Pattison Park in Owensville.

“We grow pumpkins every year. Him being away from college is going to be more on me than him,” Tom Averwater said.

Sharon Averwater described her son as an eclectic individual who is ready for the transition.

“He’s just been a delight. He really has. He’s an excellent kid,” she said. “Easy going. Just a fun kid. He’s really become a young man this year. He’s kind of grown up and he’s ready for college.