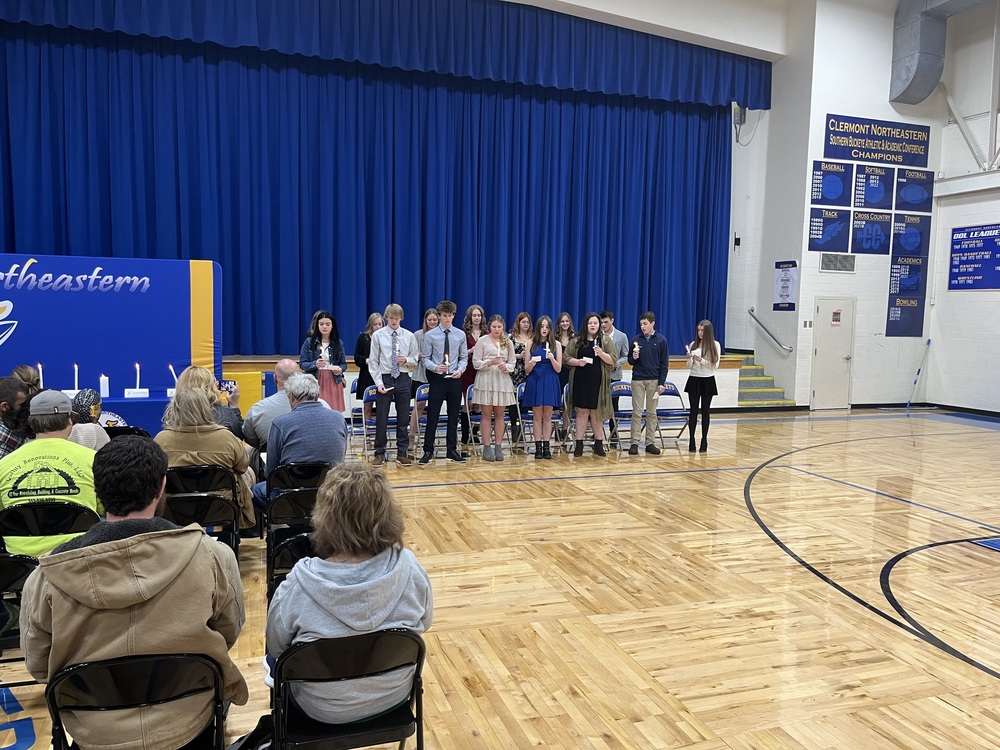 Light was very much needed at this early hour of a late fall morning. Clouds frustrated the sun’s attempts to shine some outside; inside the Clermont Northeastern High School gymnasium, however, 15 students provided their own.

They are the newest members of the school’s chapter of the National Honor Society, inducted during a ceremony both highly symbolic and structured; the highlight of which is the lighting of candles symbolizing NHS’s four principles – scholarship, service, leadership and character. The flame was later passed among the new members, each lighting their candle off of one held by the inductee next to, or behind, them.

The NHS logo includes a flaming torch in a keystone, with the letters C S L S at the base.

“The structure of our education here at Clermont Northeastern must be held firm and true by the purposes of light … we must bear forward this light of truth, to lead so that others may follow,” Chapter Advisor Steve Thompson said in opening remarks.

Membership in the group is far more than ceremonial. Thompson moved the induction from spring to early December last year, to give him and the members more time to focus on service projects – to shine their light.

“She just really took the ball and ran with it this year as far. She has a lot of stuff on the books that she wants to do, so I just want to give her as much time as possible,” Thompson said.

Moore, a senior, said she plans to attend college – probably Northern Kentucky University – after graduation and pursue a degree in computer science. “I will miss the people,” she said. “Everybody’s willing to help out.”

Junior Jesse Foebar was a member of the National Junior Honor Society in middle school. “I just set a precedent for myself that I needed to make it into National Honor Society to keep up my leadership skills,” she said.

A member of the school’s Southern Buckeye Athletic and Academic Conference champion girl soccer team, as well as a third-place finisher in the Ohio High School Wrestling Coaches Association state tournament in February, Foebar said she displays leadership in the classroom.

“I’ve helped everyone and everyone knows they can come to me for help,” she said. Foebar hopes to study radiation therapy and treat cancer patients after high school.

All four NHS principals also apply to junior Grayson “Tiger” Moore (no relation to Zoe Moore). He has served in the CNE Student Senate as president of his class for three years, and is captain of the boys wrestling team. “I put a lot of my time and effort into pretty much anything I’m a part of,” he said. “I’m hoping eventually for National Honor society this year, if not next, I’ll be president or vice president

“Scholarship’s really important to me because I plan on going to college for higher education,” he said. Grayson Moore has also volunteered at a nursing home, fulfilling the service principle, and said he displays character by “being strong, but also empathetic” with his wrestling teammates.

Eighteen students applied for membership; 15 were selected by a committee of faculty members. Candidates must have at least a 3.5 grade point average; officers at least a 3.7 GPA.

“To get into the National Honor Society you have to be more than just bright,” Glassmeyer said. “You have to take those natural God-given academic talents, and use them to make your school and your community a better place. You have to work hard. You have to give back. I hope that's something that you take with you as you leave high school and go out into the into your next chapter of your life.”

As the ceremony ended, and family and friends took photos on the gym floor, sunlight was (finally) shining through the windows on the east side of the gym - a fitting conclusion.