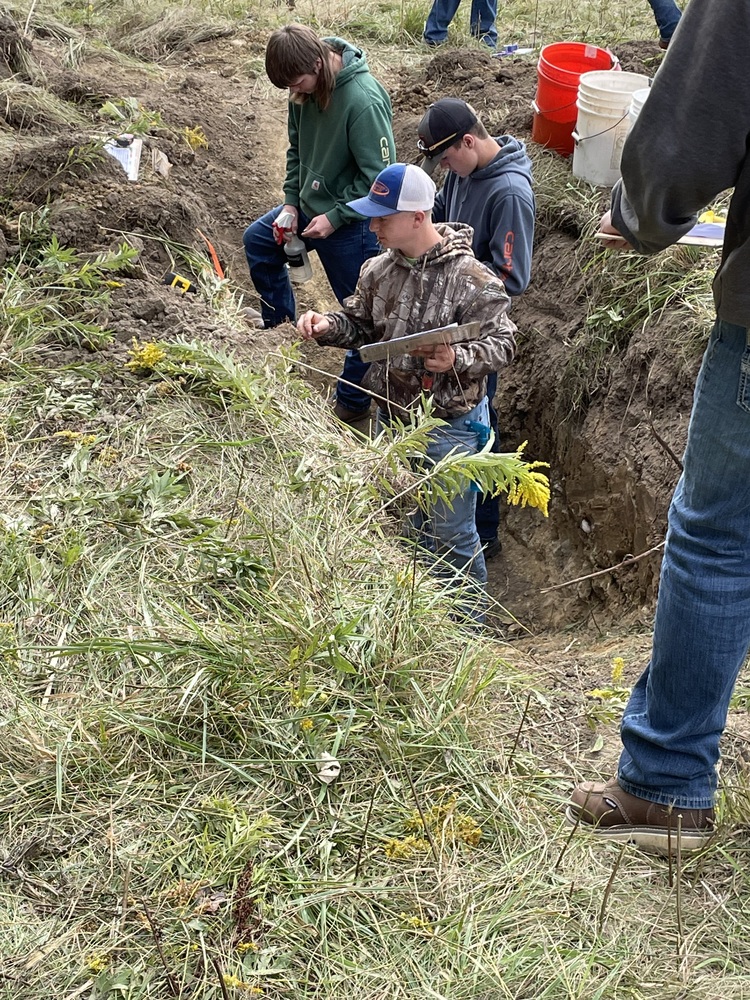 Ten Clermont Northeastern High School students spent a September Friday morning in pits of dirt, all in the name of good, clean learning.

The students were members of CNE’s soil judging team that competed in the District 9 competition at Miami University’s Ecology Research Center, just north of the college’s Oxford campus. District 9 includes Clermont, Adams, Brown, Butler, Clinton, Fayette, Greene, Hamilton, Highland and Warren counties. While the CNE team did not advance to further competition, the experience was invaluable.

Agricultural education teacher and FFA advisor Faith Stegbauer took the team, which included two freshmen, two sophomores, and six juniors, to Miami. There, they split into two groups – a rural team and an urban team. The rural team judged soil for agricultural use and the urban team for residential use – sewer systems, basement, etc …

“There are different soil pits that are dug, so the students have to go down into the pit, collect information. Then they come up out of the pit and they'll have to do what's called a ribbon test … taking a sample of soil and wetting it down and forming it into a ball and then rubbing off between their thumb and forefinger, and that's how you test the soil texture,” Stegbauer said.

Students then take a soil survey test, using printouts of local soil surveys. While on a “team,” they work independently and cannot compare notes. Individual scores are added for the team score.

Savanna Smith and Bella Farley are the freshman members of the team. Both were competing in their soil judging event.

Team members prepared with a practice round after school, and went over a study sheet while riding the bus to Miami.

“I agree with Savannah. It was honestly just like a lot of fun. It was a good experience. We didn't get all of the practice we needed because the pit that they dug out by the school was full of water, but we learned the best that we could beforehand and I mean, we both did pretty well at it,” Farley said.

So how does one judge soil? You have to get your hands dirty.

“Erosion is one, the slope and … what it would be good for, if it would be bad planting-wise, if it was going to erode a lot. The water evaluation … how much the water is going to drain, and how far along that would go,” Smith said.

“Then also the consistency of the soil. Was it grainy or was it hard?” Farley said.

They admit they will look at soil differently.

“There’s a lot more aspects that go into the soil and what uses are for it,” Smith said.

Smith and Farley hope to use the experience gained from FFA in the future. Smith is studying animal and plant science and has the goal of being a large animal veterinarian. Farley said she prefers “more mechanical” pursuits, but enjoys farming “on the side.”

“I really like being in FFA. I was in 4-H my whole life, so it’s really just one more step up,” Smith said. “And there’s a lot more aspects that go into FFA. I didn’t know there were so many options, and it really just gives me the freedom and creativity that I wouldn’t get anywhere else.”

“I love how nice everyone is. No one is too (judgmental). There’s all these contests and you get to try new things, new opportunities,” Farley said.