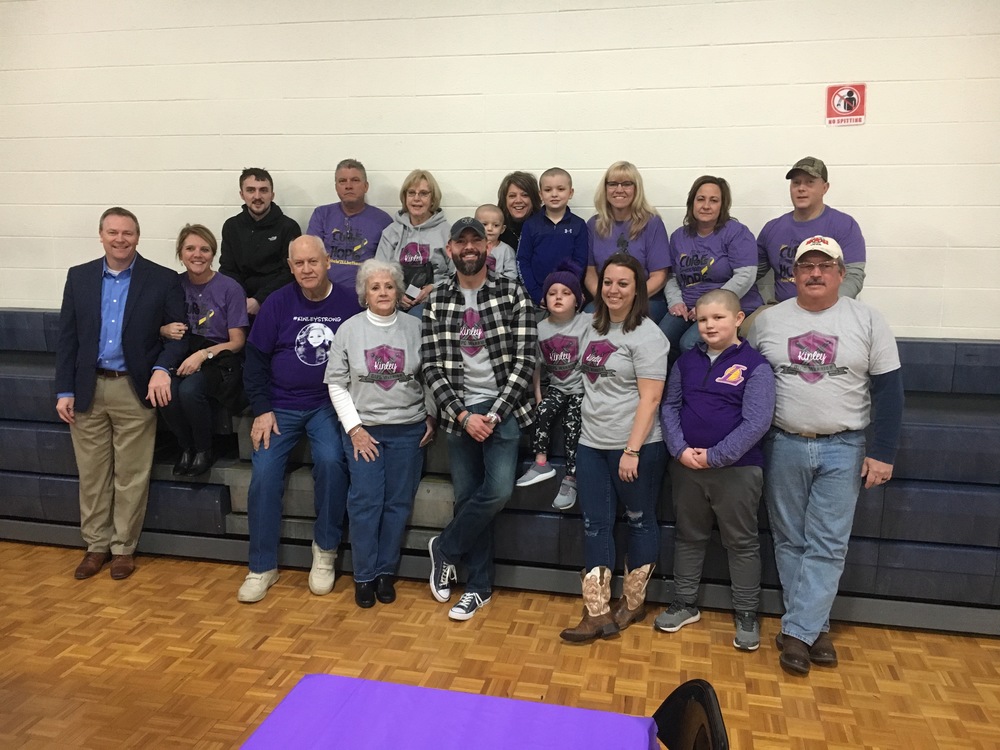 One word was repeated over and over at Clermont Northeastern Middle School Jan. 18.

“This is … this is just amazing,” Lori Diekmann said, her voice catching as she looked around the crowded cafeteria and gym at the school.

Diekmann was one of the organizers of the spaghetti dinner fundraiser for 6-year-old Kinley Sexton and her family. Kinley was diagnosed last April with DIPG – Diffuse Intrinsic Pontine Glioma. Tests discovered a tumor on her brain stem. In the nine months since, community members have stood by the family’s side with a series of events, including a 5K run/walk and an event with bands and auction at Jimmy B’s Bar and Grill on Ohio Pike.

“It’s amazing. We’re very grateful. We appreciate it. It’s amazing the amount of  … I don’t know what to tell you. She means the world to us, and it’s surreal to think that all of these people would take time out of their day to come help us as a family,” he said.

Sheri Scott, Kinley’s grandmother, said the family has been on a “rollercoaster.”

“From the time we find out, it was disbelief. Why us? What did we do? What did we not do? Then reality set in and it’s like, ‘OK, what do we have to do?’ And the whole thing is we just did it. No choice, so you just do it,” she said.

“I know we had a great community, but to see people come together like this, it’s just really amazing,” Sheri Scott said.

CNE Assistant Superintendent Wayne Johnson contacted community partners for everything from items for a silent auction, donations for basket raffles and contributions of food and drink.

One-thousand tickets were printed for the dinner, and sold for $10 each. Johnson said 750 tickets were sold in advance, and a huge walkup crowd, which included Felicity fans coming for the boys basketball games that evening, raised the total far above what anyone expected. Donations are still coming in and being recorded and deposited at People’s Bank.

“You look at Felicity coming in here, they came in, their kids put 10s and 20s in the donation barrel,” Johnson said.

Members of Felicity’s team also put together a gift bag they presented to Kinley.

“Wayne Johnson called us the day before yesterday and asked if we would be so kind as to come over and help, and we graciously accepted,” Lewis, a CNE graduate and lifelong Clermont County resident who grew up in nearby Monterrey, said.

“We’ve been doing this now 20 years, Lewis Auctioneers LLC, and we do a lot of benefits. We do a lot of auctions. We like giving back to the community … Boy Scouts, Girl Scouts, St. Louis School and charity events like that.”

Described by those closest to her – her mother, Ashley Sexton, grandmother Sheri Scott and great-grandmother Betty Scott – as a “girly-girl,” Kinley continues to attend school and even baked and decorated a basket of cookies that were auctioned at the dinner.

Bryan Sexton said his family has tried to live as normal a life as possible.

“The challenging part … mentally she’s great, but not being able to do some of the physical stuff is frustrating for her. She’s sassy. She’s mean. She’ll put you in your place. And she’s gone toe-to-toe with her brothers. It’s just like having another boy in the house. She’ll punch them square in the face if they need it. It’s kind of entertaining and funny.”

Those brothers – Case, Colton and Kane – were among the hundreds, family, friends and others – who wore various shades of purple supporting Kinley.

“That’s her favorite color,” Ashley Sexton said. Ashley designed one of the shirts, which features a shield and the words “Kinley” and “DIPG Warrior” with two crossed swords. Friends and family designed other shirts, including one that says “Beast Mode.” Design and Conquer printed shirts and owner Kristie Ruehl donated all proceeds to the family.

For one night, Kinley’s family was able to enjoy itself, thanks to a community that has adopted them, and they hope all of the efforts will make a difference.

“That night in bed, she liked to be tickled, so I was tickling her face, and I said, ‘Kinley, you look just like a little angel,’ the way the night light shined on her. I had no idea she had all of this …” Betty Scott said.

Diekmann praised the family for its courage and determination.

“You see Kinley, you just fall in love, and then you see Ashley, her will to be at school every day despite everything she’s been through. She’s amazing. Mom’s amazing. The family’s been amazing support.”