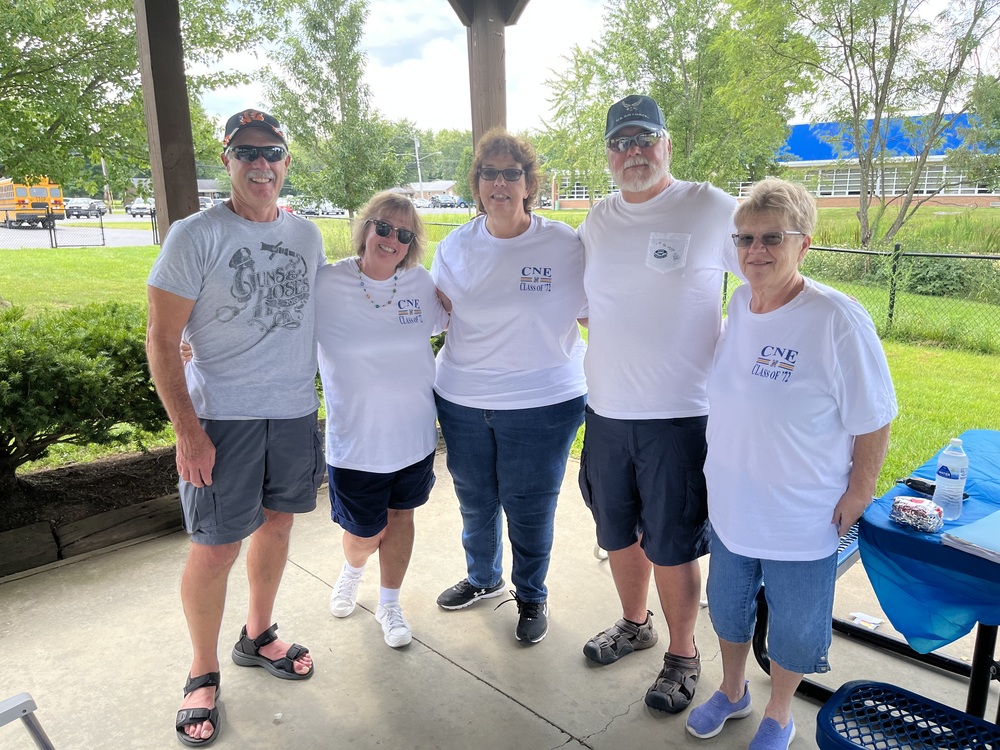 Class of ’72 donation a travel through time

Class of ’72 donation a travel through time

Visitors can now walk through the main entrance of Clermont Northeastern High School, go past the front office and gymnasium, and wind up in 1972.

In fact, 50 years are separated by about six inches. The hair styles are a bit different; the clothes distinctly 1970s-ish, and the images in gray scale, but the theme of “Rocket Family Pride” is obvious and consistent – the words are spelled out across the top of the wall. Older photos are to the left, more recent, color photos to the right.

Images on a new photo wall, donated by the CNE Class of 1972 as part of its 50-year reunion, link the past and present, and demonstrate that only time separates students then and now.

Robert Goebel, one of the members of the Class of ’72 and an organizer of the reunion weekend, proudly showed the wall to classmates and others on a busy Saturday at the school – the volleyball team was playing host to Waynesville in the gym. Graduates pointed to photos of themselves or friends on the wall, sharing the stories that the images conjured.

In the middle of the display, a large monitor scrolls more photos; below, a 24-inch touchscreen allows people to look up biographies of CNE Distinguished Alumni (the database is a work in progress).

“We felt it was important for our students to learn more about the men and women elected to the Alumni Hall of Fame and the amazing things they have accomplished,” CNE High School Principal T.J. Glassmeyer said. He and school administration have worked to strengthen the connection current students have to the school’s history, and the photo wall is another step toward that goal.

Photographer Kevin Husted created the photo wall. Goebel described Husted as “an artistic magician” who made the old and the new stand out. “That's why one side’s gray, the other side's full color. We wanted … to spark some enthusiasm with ‘hey, let's give back to our school because a lot of us got a lot of things from here,’” Goebel said.

Husted, a professional photographer based in Loveland, and his team have created all of the murals in the high school, including one with scenes of CNE athletics that greets visitors when they first enter the building. Glassmeyer referred the Class of 1972 committee to Husted.

“I didn't know what it would look like, what the sizing would be, I didn't know any of that,” Husted said, stressing that building a relationship was the most important aspect of planning and designing the project.

“I think collaboration with interested parties who are desire something is very tough and sometimes very emotional,” he said. “We are really good at working through compromise and working through the difficulties of collaboration so that we can ultimately get to an agreed upon design and I think that's really important, to work with people and not just show them four or five different animals and say ‘pick one.’ It's got to be something different than that.”

Fifty-nine of the 144 class members attended the reunion; Goebel said 27 classmates have passed on, and a memory wall was created for them at the Friday dinner at Norlyn Manor in Batavia. Activities concluded Saturday evening with all-alumni get-together at the Clermont County Fairgrounds in Owensville. Some came from as far away as Arizona, Florida, North Carolina and Tennessee.

“Really and seriously it’s all about people making connections because 50 years, when we try to point it out to people, ‘Listen, you're not guaranteed you're going to wake up in the morning. So this is your one shot, 50th reunion, and that only happens once and that's a good time to get together,” Goebel, a retired United States Air Force lieutenant colonel, said. “Renew acquaintances. See old friends that you haven't seen a long time and have some fun.”

Those who returned, came back to a school very similar to the one from which they graduated a half-century ago, but in many ways very different.

Goebel, who lives in Montgomery, has driven past the campus when he goes to Jungle Jim’s in Eastgate. “In fact I took a tour last year with the assistant athletic director or coach, he was just out here and he walked me around. I couldn't believe the amount of changes, where things used to be and where things are now. So it's incredible,” he said.

Cathy Meyer was the prom queen in 1972 – a photo of her wearing her crown, with her date, is featured on the mural. She agreed to help organize the reunion as a tribute to her twin sister, who has breast cancer.

She said, ‘Before I die I would like to see my classmates’ and I said, ‘I will make it happen if you can hang in there,’” Cathy Meyer said. “And unfortunately she didn't get … she is living but she didn't get to come … chemotherapy has her count so low.”

Goebel took a laminated photo of the wall to the Friday dinner and had everyone there sign it. “It made me want to cry. I tell you when she sees that, that is going to be a boost for her,” Cathy Meyer said.

Meyer remember when students were allowed to smoke outside the school building – and a warning her sister gave her.

“’That’s the bad kids and you don't go out there.’ Well, I would go out there and I invited them to church,” she said.

Class members raised $5,600 for the wall, Goebel said, and a couple of anonymous donors contributed as well. They sold tickets to the Friday dinner, T-shirts, and had a split-the-pot. They also sold laminated copies of the class photo ($20 each); that money will be used to help needy students at the high school.

Attendees also received laminated copies of the May 11, 1972, issue of the school’s newspaper, The Rocket, as well as placemats highlighting events of 1972, and participated in a 30-question trivia quiz.

“A lot has changed in the last 50 years but the pride shared by students and the community has not changed,” Glassmeyer said. “Clermont Northeastern has an incredibly rich history and we truly appreciate the Class of 1972 helping us share it with our students.” 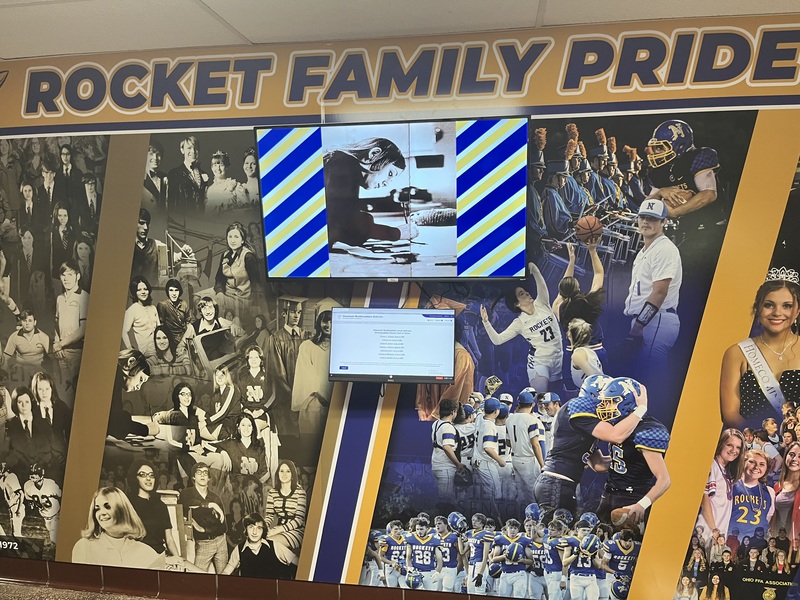