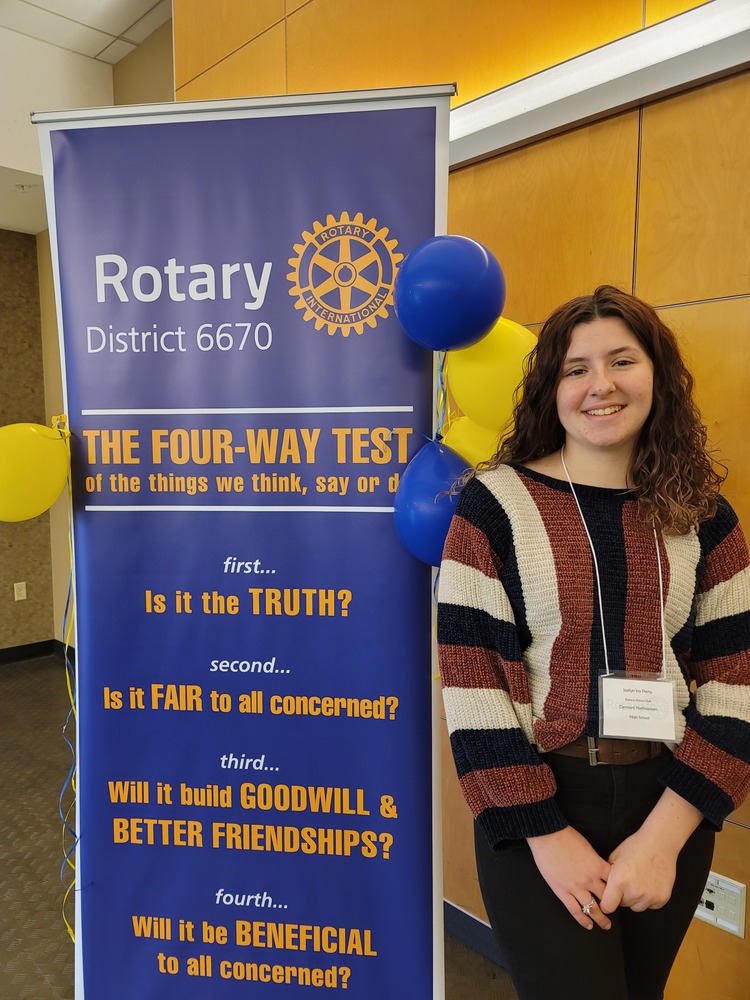 Imagine being so terrified of an activity that you willingly agree to participate and then prove to be among the best. How would you describe such an experience?

Clermont Northeastern High School senior Jaelyn Perry used that phrase repeatedly when she was discussing the Rotary Four-Way Speech Contest that took place last month. Perry won the Batavia Rotary’s competition, qualifying her to advance to the district level at Wright State University. Her reaction to winning: “I was excited. I didn't expect it. So it was really nerve-wracking because that meant I had to go on.”

Perry, as she freely admits, does not enjoy speaking in public. She may have more afraid, though, not to give it a try.

English teacher Bernadette Wayne helps worked with Perry. Writing a speech to meet the Rotary Four-Way Test is part of the curriculum for all seniors; students are then encouraged, but not required, to participate in the Rotary contest, with the understanding that they will continue on to the district of they qualify. The timing of the competition – right around the school’s spring break – limited interest.

Perry, though, went the extra mile. She crafted and distributed a survey, posted in CNE’s English classrooms, about gender discrimination at the school. Questions included “Have you ever said something that could be considered discrimination?” and “Have you had something said to you, or an action?”

“I was expecting from the girls like a lot of, ‘Go back to the kitchen.’ From the guys, ‘Oh, you should play this sport because you're a guy,’ but I got way more than I expected,” Perry said. She took the best responses and incorporated them into her speech – by rule, it could be no more than six minutes. She practiced the speech in front of Wayne, family and friends, and revised it a couple of times before the local contest.

The, she faced the fear.

“The first time, the one that was at Batavia, that one was really hard. And then when we went to Wright State it was a lot easier because I knew the speech and I've already said it once in front of a group of people I didn't know so it was like a repeat and it was a lot easier. And by the third time saying and it was pretty easy,” she said.

Rotarians were impressed, to the extent that several offered her advice as she moved on to district. She also opened some eyes.

“(At Batavia), they came up to me and people told me that they didn't even realize it was happening. And I got tips from this one guy … he’s in the Batavia Rotary. And he gave me tips for when I go to Wright State, (for example) my time was good at this maybe, mention less of this. I don't remember exactly all the tips he gave but he gave a few tips.”

“The Rotarians said that's the first time they remember anyone doing an actual survey of their peers or any kind of survey putting together immediately relevant data to put into their speech and they were really blown away that she put in the time and effort to put out a form,” Wayne said, adding that this was the first time she can remember Rotarians giving her that kind of feedback about a student’s speech.

Wayne has been more than a teacher to Perry. Last year, Perry suffered a panic attack while in Wayne’s class.

“She was there. She kept checking on me. She made sure I was OK, and the principal and the vice principal. They're very supportive to me.” Wayne deflected credit.

“I like that we allow them the space to select themselves and push themselves because if I may not have selected her based on where she was when we're doing it in class, she would have missed that opportunity,” Wayne said. “And when she felt ready to step up and really put in the extra effort that gave her the push that she needed that extra motivation.”

Perry, who also cheers, plays softball, is in the Leo Club and FFA at CNE, plans to attend Aveda Institute and study cosmetology after graduation, then go to business school and perhaps work in a salon “and work my way up.”

The Rotary Four-Way Test for speech includes these questions:

• Is it fair to all concerned?

• Will it build goodwill and better friendships?

• Will it be beneficial to all concerned?