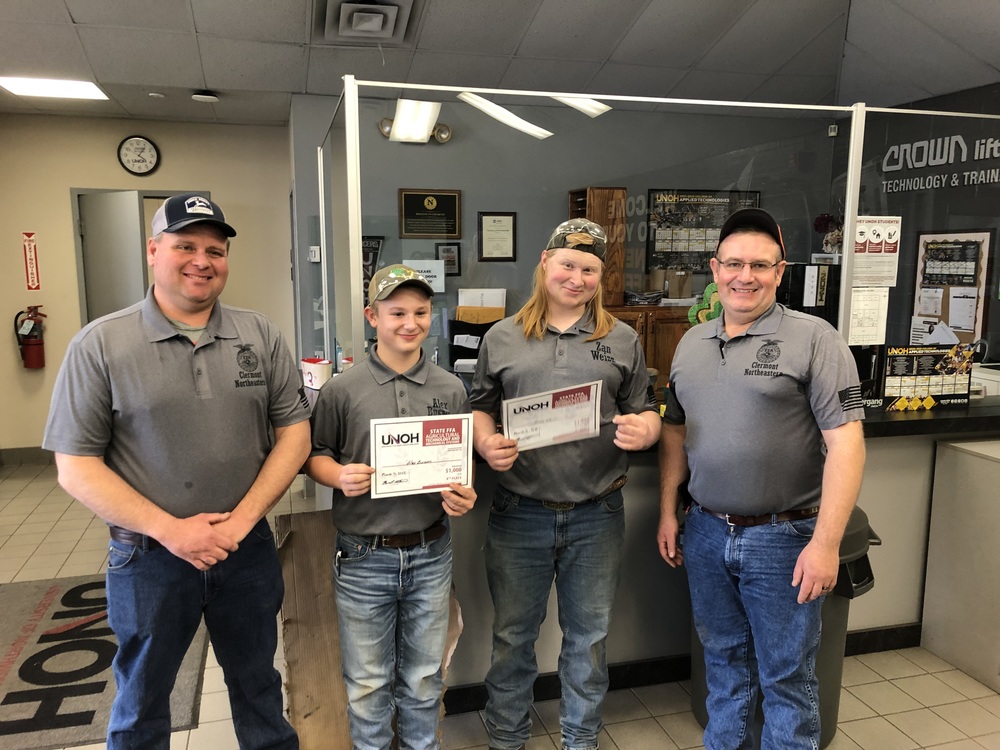 Two Clermont Northeastern High School sophomores are adept with their tools – as long as they can get to them.

That may have been the greatest challenge when Alex Busam and Zan Weiss competed in the Ohio Agricultural Power Diagnostics event March 4 at University of Northwestern Ohio in Lima. The pair arrived at their hotel room the night before the event, already confused and a bit frustrated from trying to find their way around the campus.

“Definitely a lot of driving in circles,” Weiss said. “One way we end up having to make a U-turn and come back because it's not laid out very well.”

“It’s all very spread out there. It's all in the same area. You just have to take 15 different routes to get to the same thing,” Busam said.

When they finally got to their room, they checked their tool box. It wouldn’t open, no matter what they tried. Weiss explains.

“The key wouldn’t go back in the lock. So we couldn't get it unlocked. We're in the hotel room picking this thing up and slamming it to the ground trying to get the thing to open. People probably think somebody's going to fall through the roof,” he said. Advisor and coach David Lewis eventually started shaking the box, and it opened.

Busam and Weiss would go on to place eighth in the state competition. They qualified after a second-place finish in the district competition at Ag-Pro in Wilmington. That was their first event together, and Busam admitted surprise that they did so well.

“We didn't expect anything going in. We didn't know what we were getting into or what it was going to be like. Kind of just showed up with our little tool bag and just went to work,” he said.

Weiss said other teams had “fancy tools and equipment, which was somewhat intimidating,” but he and Busam had the most important tool – confidence.

“You’ve just got to remember that all you really need is a volt meter. You don't need all these other extras that everybody brings with them,” Weiss said. “It’s intimidating to a level, but if you know your stuff, you won't have an issue. Just have to go in with confidence. Otherwise, you're not going to do very well.”

Both have experience working “under the hood.” Weiss’s grandfather owned a trucking company, so he was brought up “on the big stuff. This little stuff is kind of intimidating.” Busam had worked with his father and grandfather. Weiss asked Busam to compete in the event with him.

“He works on tractors a lot more on cars and stuff. I said, ‘Hey, you should do that. I think you'd like it.’ And it turns out, we worked great together,” Weiss said.

District competitors diagnosed equipment such as sprayers, mini-excavators, combines and tractors. Teams were given three minutes to discuss the problems with each machine, and then 20 minutes for the hands-on work. That’s where the volt meter proved valuable. They checked to see whether a fuse was blown, or whether there were other reasons circuits weren’t being completed.

At state, Busam and Weiss diagnosed a mini excavator and a combine. The district competition was sponsored by John Deere, so all equipment at that level was from that company. Brands at state included Kubota, New Holland and Mahindra, as well as Deere.

“They really focused more on the wording than districts did. And districts the kind of problems weren't necessarily easier, but they were just, their pathway to them was easier,” Busam said. “At district, you’re able to ask more questions. Here, they just tell you … I don't know. You’ve kind of just got to figure it out,” Weiss said.

Using computers for reference was also a challenge. Weiss said they practiced on a John Deere 4020, a model built in the 1960s and 1970s, and for which they had a paper manual. He prefers the “classic” method.

“I can pretty much tell you where to go if you can get me to it, but we're on the computer, there’s 15 million buttons to push because they don't have a manual. They have electronic manuals, but I just prefer paper. I flip right to my page,” he said. “And all the manuals now they have no table of contents. So you're kind of taking a guessing game on what you're going to find in there.”

The youngest team at the state competition, Busam and Weiss look forward to returning and improving their standing over the next two years, perhaps even exceeding the district championship and fourth-place finish of CNE students Tommy Averwater and Doug Morgan in 2019.

They certainly have the necessary tools.