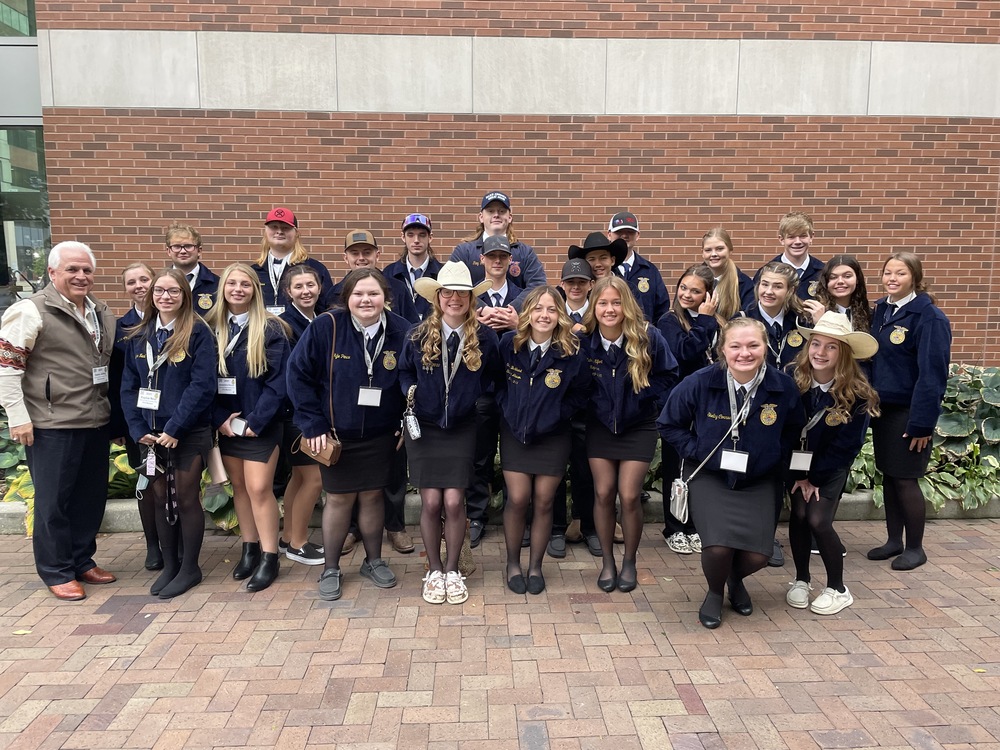 Hands on a keyboard is one thing. Hands-on experience is another. The second is invaluable for those in agriculture, and those studying to join that industry. Hours in front of a computer screen will never replace a fraction of that time in the field, in the woodshop, or just talking, in person, with others who share those interests.

Members of Clermont Northeastern High School’s FFA (Future Farmers of America) chapter adapted the best they could during pandemic-related shutdowns. They were rewarded with a trip to National FFA National Convention & Expo in Indianapolis.

Hannah Heller is the CNE FFA president; Parker Johnson is the vice president. Both are seniors and four-year FFA members. They were part of a 27-person delegation (25 students) that attended the convention Oct. 27-Oct. 30. It was Heller’s second national convention (she went in 2019) and Johnson’s first. The 2020 convention was conducted virtually.

Virtual, though, is not reality.

“A lot of FFA is a hands-on experience, like we are in the woodshop right now. Can’t do that online when you’re quarantined,” Johnson said about the difficulties FFA members face during the last 18 months. “As a chapter, we tried to adapt and improvise as much as we could to the situation as nobody else really knew what was going to go on or how we were going to handle it. We did the best we could try to help each other out as much as we could, you know, regarding the pandemic.”

Field trips were canceled. Members made the most of the situation working in the school’s FFA classroom and shop area,

“Most of the stuff that we would usually do, we kind of improvised and did some of this stuff, like how we would travel and go do different activities and things with FFA,” Heller said. “We would try and do it here and kind of like make it our own type of thing.”

David Jelley is CNE’s agricultural education teacher who guided the students through the temporary changes that only made members more anxious to get back out in the field. The group of 25 was the largest delegation Jelley said he has taken to the national convention in Indianapolis. Louisville has also hosted the event, but the FFA national headquarters are in Indianapolis.

CNE’s membership had held steady at about 100 – approximately one-fourth of the high school enrollment, Jelley said.

“It's been like it is in society, it is a big adjustment. It's not the same as being in person, but it's great that we have the vaccination and that people were able to be together and to really experience it first-hand,” Jelley said.

“We did do a lot of online during that time period, and it's just not the same when you’re online versus what you can do. Woodworking you had to work out of a book and you couldn't be actually doing projects with it. Same way with welding, you had to do it,” Jelley said. He compared learning those skills online to learning how to drive a car – a person can read about it all they want, but at some point they need to get behind the wheel.

Attendees were required to wear masks in the convention’s indoor settings, most in Lucas Oil Stadium, where the Indianapolis Colts play. There were some outdoor venues around the stadium as well. As many as 70,000 FFA members from states as far away as Hawaii attended. The scale of the event impressed Heller and Johnson.

“I've never been there before and just the size of the stadium itself and how many FFA members were inside of there. I mean, it was more filled than an Indianapolis Colts game,” Johnson said. “It was just cool being around people with the same interests as you from different states and all the different careers you get.”

“I think one of the most interesting things is seeing all the people from all around the country, like just there's so many people, and it's so cool to think about that they're doing all the same things that you are from everywhere.”

One of the biggest exhibitions at the convention is the college and career center. “It's a great opportunity for the kids and the colleges to meet up to talk about their careers,” Jelley said.

Johnson plans to join the military after graduation (he is undecided on the branch) and also attend nursing school. Heller wants to study veterinary medicine and agricultural education. Ohio State is her preferred school. Both say FFA and Jelley have prepared them for their next step, and encourage others to join the group.

“I’d say to them, you'd gain like a lot of good friendships, and become closer with everybody that shares the same interests as you and get a lot of agricultural knowledge in all types of things,” Heller said.