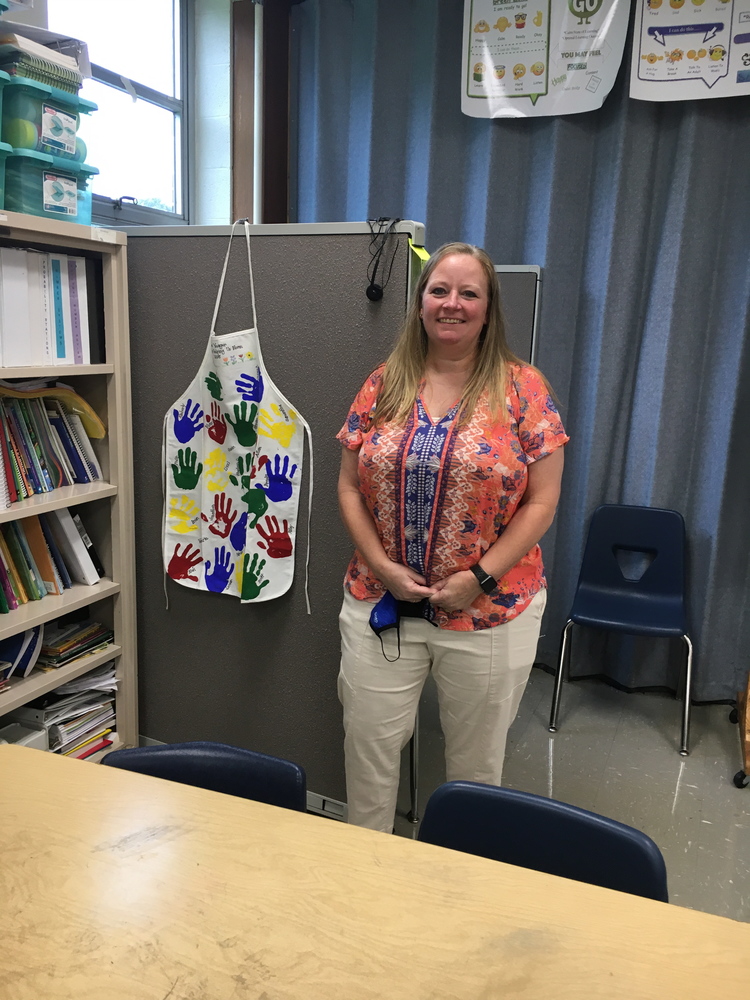 When she needs a helping hand, Cindy Dorsey can walk to a partition in her classroom and find a whole set of them – blue and green, red and yellow. Impressions left 26 years ago by her first class of students, then at Clermont Northeastern Elementary School.

The apron is one of many keepsakes Dorsey has saved over the years – both tangible and intangible. The Clermont Northeastern Middle School math teacher is the Ohio Middle-Level Association’s Educator of the Year. She will be honored in late October in Columbus. School staff will be there, and Dorsey will carry the memories of the hundreds of students on whom she has left her own impression, students who might be able to answer the question she asked herself when she learned about the award.

“I get to do what every other teacher does, so why me?”

CNE Middle School Principal Laura Nazzarine can elaborate. Her essay, submitted with the nomination, described Dorsey as “an outstanding teacher,” “a true mentor” and “an outstanding educator.”

“She is warm, caring and passionate about her kids as well as her content,” Nazzarine wrote. “Kids feel that they can come to her not only for help in math, but in life. She stays in and meets with kids during her planning bell and lunch. She is a good listener and helps them set goals for their own personal best.”

Dorsey began honing such qualities when she was 3- or 4-years-old, when her sister would come home from kindergarten and they would play school. She admits that going to school was not her favorite activity, but the embers were still stoked at young age.

“I had some great teachers that really were mentors and made me really … enjoy going to school and actually I really learned from them, and one of the teachers I had in seventh-grade, when I came back here, I taught with him, and ended up … inviting him to our wedding, so just those relationships that those kinds of teachers built with me, I wanted to be able to do that for other kids,” Dorsey said.

Save for her college years at Northern Kentucky University, where she did her undergraduate work, and University of Cincinnati, from where she earned her master’s, Dorsey has spent her entire educational life in Clermont Northeastern schools. She worked one year at the elementary, and the last 24 at the middle school, teaching seventh-grade math - a subject she said was not among her best when on the other side of the desk.

“I tell the kids that all the time it's OK if you don't like math. I'm going to hope to change your mindset just a little bit. I said I didn't like it either, but now it's one of my favorite things. So it's kind of like I wasn't the best at it, but I didn't want other kids to feel how I felt.”

Math is a subject of definite outcomes, but Dorsey with many ways to reach those outcomes. Dorsey rewards the trip as much as destination, even celebrating wrong turns. “Her students feel safe to take risks, try new things, and aren't afraid to make a mistake. In fact, she would call it her favorite mistake and will use the mistake as a learning tool to teach the whole class,” Nazzarine wrote.

“I had some great teachers going through here. You always have one or two that you're kind of leery to have, but they were the teachers that honestly you would do a problem, you might make a mistake, but they celebrated it,” Dorsey said. “Let’s, let's help her out, let's see how we can correct this. So I like to kind of give that to the kids where it's OK. We all make mistakes, no one's perfect, and let's celebrate. Let's look at what we can do to help each other, and go through everybody's mistakes.”

She specifically related a story that happened this year. The class was working in small groups, and one student was trying very hard to give the correct answer. “Finally, at this point she said ‘I’m just throwing out random answers.’ I'm like, that's all right, we're going to, we're going get to that answer. It's OK. You're not wrong,” Dorsey said.

Another student came up to Dorsey after a class this year and thanked her for taking the time to sit down and work through problems.

That encouragement, that support, is why many of her students still keep in touch.

“There was a girl in seventh-grade, I'll never forget, wrote me a sweet letter, and I kept the letter, and she moved the next year to a different school, but I went to see her at her business a couple years ago, just to see how she was doing,” Dorsey said.

When not in the classroom, Dorsey said, you can find her at somewhere around campus. Her son, Jay, a freshman at Clermont Northeastern High School, plays football and baseball, and wrestles. Daughter Lizzie, a fourth-grader at the elementary, plays volleyball – coached by her mom, and one of Cindy’s former students.

Dorsey is also the middle school track and field coach, and coached high school volleyball for 10 years before her son was born.

“I love how this school and this community just support each other through. It’s really nice being that small-knit community because you do, you know everybody,” Dorsey said. “I get to see my kids grow up with some awesome people. Like how tight knit it is. It was great high school, great school when I went through and being able to send my kids here. I feel privileged.”

Somewhere, members of a third-grade class from 1995 feels the same.

The Educator-of-the-Year Award is the most distinguished honor the Ohio Middle-Level Association can bestow upon an individual to recognize his or her contributions to middle-level education. Winners will be recognized at the OMLA annual state conference Oct. 28 and Oct. 29.