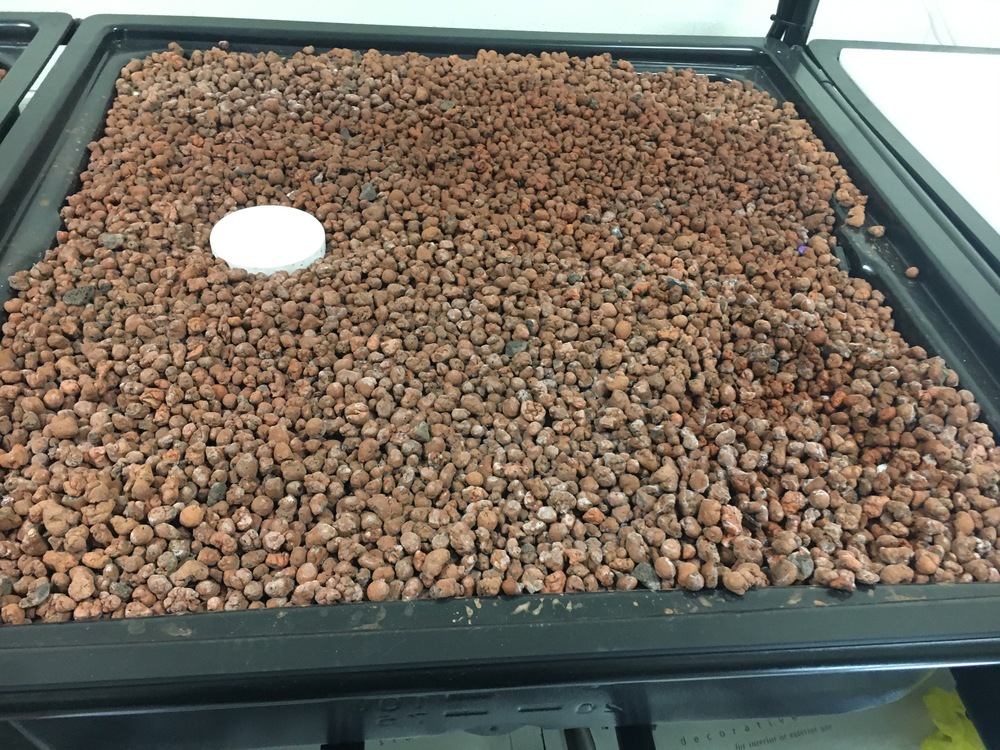 Every so often, Scott Wells will go to the back of his classroom at Clermont Northeastern High School, to a smaller, secondary room. There, he will select certain members, put them in a plastic tub, weigh them and record the data, all while hoping they don’t jump out onto the floor.

Once those that he has weighed are big enough, they will be taken from their tank, fileted and eaten.

It’s all part of the aquaponics cycle Wells and other science teachers have set up at the school. The system incudes a 350-gallon aquarium which currently holds about 30 tilapia; two lava rock grow beds and two water growbeds. More tilapia will be added, up to about 120 total.

Aquaponics is a hybrid term of aquaculture and hydroponics, and is essentially growing plants without soil. CNE’s system will be integrated with the greenhouse Wells and fellow teachers Tony Gettler and Steve Williams hope to have up and running sometime next summer.

The tilapia nourish the water as it runs through the system. The plants will take nitrogen and “fix” the bacteria to make nitrites and nitrates. Wells described the process as “a sustainable ecosystem all on its own.” He began setting up the system last school year, but circumstances slowed the process. Over the summer, Wells established a partnership with Roothouse Aquaponics in Batavia.

Students will play a big role in maintaining the aquaponics system, with a goal of helping them connect with and understand employment and volunteer opportunities in agriculture.

“There will be a lot of interaction. We’re testing the waters every day, making sure, because I mean we're talking about sustainability in the ecosystem,” Wells said. “You know when one thing goes haywire, the whole thing collapses. And that's going to be in zoology class as well. Should be a lot of fun.”

Gettler, CNE’s environmental sciences teacher, said the hands-on experience provides real-life lessons for the students, beyond the sterility of a textbook.

“Textbooks and things like that, we get what we call, I call anyway, cookbook lab, where it's like, ‘OK this is already prescribed, it's been done 100,000 times, it always turns out the same thing, there's no what ifs in there, like this is what's going to happen,” Gettler said.

“But with this, we don't know. I mean it could be anything. Heaven forbid, what if the power goes out, and the pump stops working for a couple of hours … what's going to be the repercussions of that, how do we solve those problems, what are we doing?”

Just as aquaponics rely on different components working together for success, managing them does as well.

“To me, the most valuable learning is that their teachers aren't experts, right, we're all learning this together, so they can see how our minds work,” Wells said. “And, you know they can adapt to that as well, like kids start seeing like OK, this is what we're seeing, what do you think of this, because we don't know.”

It will be another two months or so before plants are added, Wells said, once nitrate and nitrite levels stabilize and their presence won’t endanger the fish. By the end of the school year, the fish should all weight a couple if pounds each, at which point wells and students will remove them from the pond, dissect them, and then prepare them as a meal.

“The flavor’s very light, so for people, even if they're not the biggest fan of fish, give them this, try it out, they might actually like it,” Williams, who teaches biology, said.

The aquaponics system costs about $6,000 and was paid for by a grant.