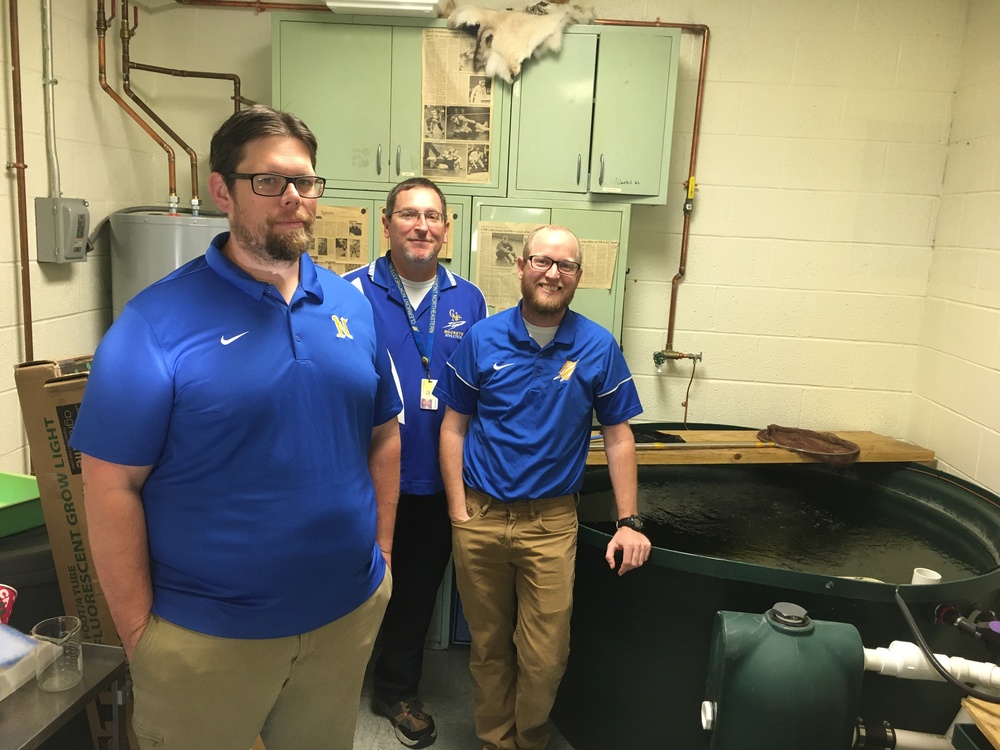 Next year at this time, Clermont Northeastern High Schools students will not only be planting the seeds of knowledge, they will be eating from them as well.

The United States Department of Agriculture has awarded the school a grant to build a greenhouse on campus. Science teachers Tony Gettler, Scott Wells and Steve Williams are heading up the project, and are planning the best ways to utilize the eventual harvest, for both the school and the community. They have formed a partnership with Roothouse Aquaponics in Batavia, for assistance and ideas.

The physical structure is still an idea, but the excitement is in full bloom.

He teaches environmental science; Wells teaches zoology and Williams teaches biology. They have “wanted a greenhouse for quite some time,” Wells said, praising high school Principal T.J. Glassmeyer and the CNE administration for their support and initiative in securing the grant. There will be no cost to the community, and the greenhouse may have a commercial benefit.

“It’s farm-to-table grant, so it’s like taking it from the farm into the cafeteria,” Wells said.

Self-sustainability is the goal – using compostable or recyclable materials from the school cafeteria as fertilizer and mulch for the plants, some of which would eventually wind up back on the lunch trays.

“We're hoping to grow plants that will produce fruits that we cannot just add to some of the things that they have, like tomatoes and cucumbers … but to actually expand the menu into some of the new things and new opportunities and options, you know, like maybe like an eggplant. Instead of having chicken parmesan, you have eggplant parmesan as a possibility,” Gettler said. Students, he believes, may be more inclined to eat fruits and vegetables they grew themselves.

“Definitely a difference between finding the zucchini at the grocery store versus having a zucchini that you actually grew and eat,” Williams said.

There may be a commercial benefit, as well.

“We’ve even kicked ideas around. It's all very premature but maybe producing a couple of different types of salsas, or something like that that we might be able to, to possibly sell, or even use in the cafeteria to just to help cover whatever overhead we may have,” Gettler said. They have also discussed setting up farmers markets, if the yield allows.

The greenhouse will most likely be built near the pond on campus, to the northeast side of the high school. There, they can connect electric and water to an existing pumphouse station and are assured of adequate sunlight.

Terms of the grant proscribe that the structure must be in place when the 2022-2023 school year begins. Williams said they hope to break ground by next June. They are reaching out to community members who have experience with greenhouses for advice.

Each teacher will work the greenhouse into his curriculum. Gettler emphasizes sustainability and said the composting cycle will help students “see the full circle.” Wells sees lessons in cross-pollination and hybridization. Williams hopes the greenhouse helps reinforce what can sometimes be abstract concepts in biology.

“And it leads to, we can do comparative science, because with the aquaponic system, we now have, we’ll probably growing similar same type things in the greenhouse, next to where we can kind of start comparing the yield production and different things to where, you know, which ones are more sustainable.”

The grant was for around $50,000 and will include more than the structure itself. Wells noted that they had selected a greenhouse, but the price jumped by $4,000.