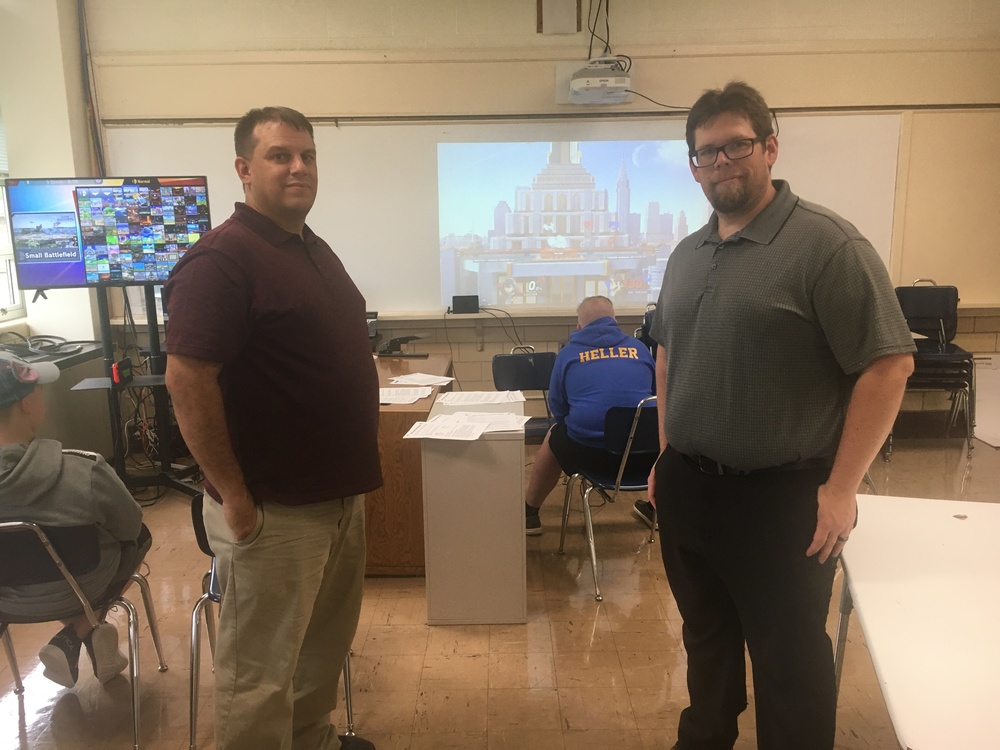 ​CNE eSports team ready to show it ‘has game’

CNE eSports team ready to show it ‘has game’

Two weeks before their first competition, students participating in Clermont Northeastern High School’s newest extracurricular had no uniforms and were still waiting on their equipment. Their coaches were trying to determine their role.

The excitement and enthusiasm, though, was evident.

Robert Sick and Steve Williams are the faculty members in charge, and have spent much of the preseason getting acclimated and organized.

“We are learning every single day how to coach,” Sick said. He and Williams and five students are in what will be team’s home “arena” – a classroom in the north wing of the high school. The students are playing Smash Brothers, one of seven games sanctioned by eSports Ohio, which regulates the competitions. There were two monitors in the room this day; they were expecting 24 to be set up the next day. The district secured funding through CARES grants.

High School Principal T.J. Glassmeyer said he and Dean of Students T.J. Dorsey were working to provide more after-school activities for students who were not interested in sports. “We began looking at different options and stumbled across eSports, which is exploding in popularity,” Glassmeyer said. ‘There are a number of schools in the area that have competitive gaming teams and the rise of college gaming scholarships makes it even more appealing. Our superintendent, Mike Brandt, and treasurer, John Espy, were incredibly supportive and helped secure the funds to purchase the necessary equipment.”

Glassmeyer sent an email to faculty and staff asking for coaches, and Sick and Williams stepped forward. Both are video game players.

“I went to his room and said, ‘Hey, do you want to do this together?’ and we asked to split it, and somehow we dove into it not knowing a thing other than it was some sort of eSports,” Sick, a mathematics and special education teacher, said. “When that came out, I said to myself ‘This is pretty cool. How am I going to start this off? How am I going to get this going?’ He had the exact same thoughts and we’ve known each other for … how many years now, 16 years?”

Williams, who teaches science, envisions the two taking on more of a supervisory role as the season progresses. Schools can field three teams of up to six players each during competitions. Each team will have a captain. Sick said they hope to have 40 or more players, and all will get a chance to compete, whether as starters or “backups.”

That is a primary reason for forming the team, Glassmeyer said.

“We have already seen a number of students, who had not been involved in any after school activity, join the team,” he said. “This really is another way for our students to stay connected to the school and build positive relationships with staff and other students. It also provides students with an opportunity to be successful, shine, and showcase their skills in a different way.”

The U.S. Army and Ohio Army National Guard are among the partners and sponsors of eSports, Sick said, in part because of the teamwork and leadership skills taught by the games.

“The biggest overarching it’s going to teach is teamwork, working with others, because a lot of real world is working with others and working with maybe people you don’t like, or maybe in a different way,” Sick said. “It teaches problem-solving skills that I think is the biggest real-life skill that any teacher can teach a kid is how to solve a problem, and we just happen to be doing it through a video game.”

eSports Ohio has several curriculum and parent resources based around the games.

Teams can set up scrimmages during the week of Sept. 13. The league schedule begins the week of Sept. 20 and runs through the week of Nov. 1, with a makeup week Nov. 8 and regionals scheduled for Nov. 20 and Nov. 21. The only travel will be for the regionals. State finals will be contested remotely. Sick said matches may be streamed so people can follow online.

“This is one of those universal things. It doesn’t matter if you’re in one clique or the other, everyone plays a certain game. It’s really cool,” Williams said.