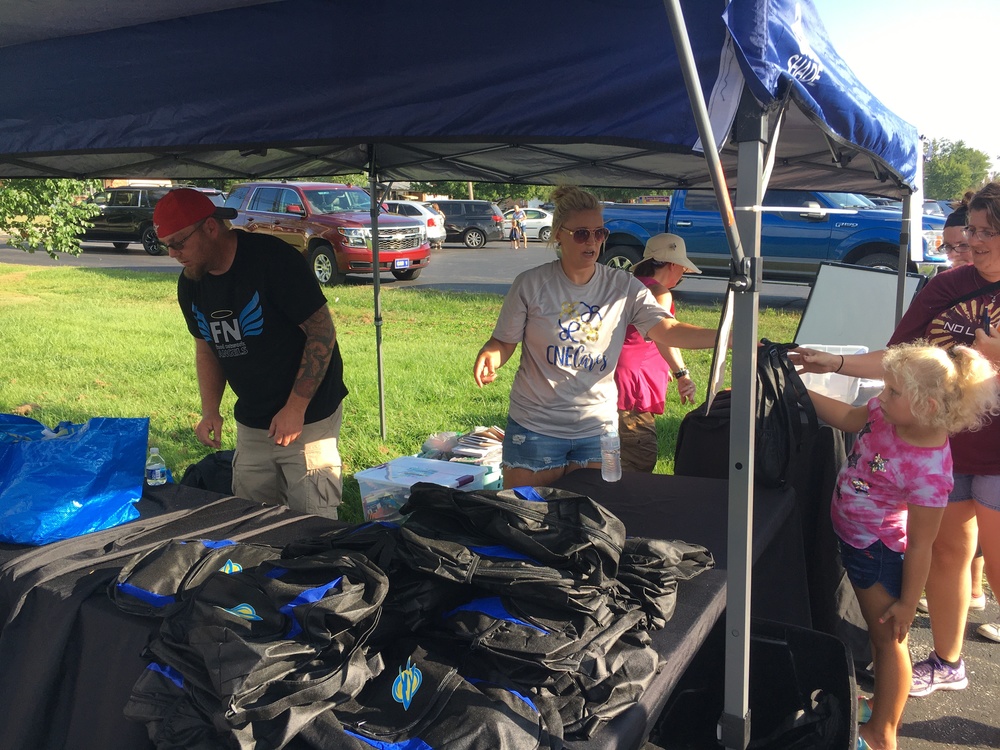 Shade was the most precious commodity at Clermont Northeastern School District’s open house Aug. 12, and Daryl Poe may have had the prime spot.

Poe was sitting under a large tree, just outside the Monterey Baptist Church, where he is pastor. The church, which is next to CNE’s three-school campus on Hutchinson Road, was the focus of much of the activity at the event. Several local businesses and organizations set up tents and distributed much-needed school supplies, five days ahead of the opening of the 2021-2022 school year.

Poe and fellow church members gave out backpacks and other items collected from members, as well as freezer pops. The congregation of approximately 125 welcomes the collaboration.

Greg Saylor, the Sunday School director, sees the outreach as a chance to grow the church, which saw membership decline slightly in 2020. CNE students visit the church once a week to get help with homework.

“The dynamics have changed a little bit because of COVID. We’re not getting as many as we’d like to. We hope to change that, but we’ve got an older congregation right now, but again the focus that we’ve been trying to focus on the last year is families, because if you get the families involved in church, then the kids will come along,” Saylor said.

About 30 feet away, Brad Leigel was working a grill, cooking hot dogs. He is president of the Northeastern Lions. Group members prepared the food, wrapped the dogs in buns and foil, and distributed water bottles and bagged snacks such as chips. The district supplied the food.

Northeastern Lions and the school district have a long and strong relationship. The organization funds four to six scholarships per year to CNE seniors, and there is a Leo Club – a junior Lions Club – in the high school.

“Pretty much anything they ask us. This is the one major event,” Leigel said. “We actually get good cooperation from them because we actually donate back in the five figures to the school system. They’re our biggest people we donate to, and we actually help them out with any activity they want to spend their money on.”

Chris Rose and Kim Smithers, from the Clermont County Public Library’s Owensville branch, sat behind a table piled with highlighters, pencils, rulers, stickers, note pads and brochures. “We were honored to remembered and to be asked to come back out,” Rich said. “They asked for 500 giveaways or whatever we could give and we bought our usual assortment of goodies.”

Lindsey Holland was at the event for two reasons. The Weichert Realtors agent was handing out file folders and, as a parent in the district, going through the elementary school and high school open houses as well. The elementary school is the closest of CNE’s three buildings to the church.

“We really want to get our name out there and that we’re part of the community. We love giving back to the schools. It’s very important to have a good strong school district, so anything we can do to help out the kids,” Holland said.

CNE CARES organized the school supply giveaway. The group - Community Alliance for Resources, Engagement and Support – formed in March 2020 and has become a lifeline for underserved district families living below poverty level. This was CNE CARES’ first appearance at the school supply giveaway, since there was no such event in 2020. Wendy Sparks and Julie Schmidt run CNE CARES, with the help of volunteers.

This spring CNE CARES set up a truck at the old primary building in Owensville, part of which the organization uses as its headquarters and food pantry, and collected more than $3,000 worth of supplies.

“Last year we had 600 backpacks donated from Jeff Wyler and we were only able to distribute 300 because we couldn’t (do) in-person, so we have the leftovers and they come with pencil bags and water bottles this year,” Sparks said. “Some people donated crayons, so we just hand them out, and we’re giving out some power packs, and we have leftover produce and milk.”

Schmidt said being able to see people face-to-face at events such as the school supply giveaway is crucial to the CNE CARES mission.

High school Principal T.J. Glassmeyer was excited to welcome families back into the building after an unusual and stressful 2020-2021 school year.

“We love opening up the building to the community and our families and having them in here. It’s something we love doing every year and hopefully we’ll be able to continue it,” Glassmeyer said.

Sparks could sense the enthusiasm.

“I think there are a lot of parents in the community, it’s a relief that their kids are starting to get back to normal. They really didn’t have a lot of that until the end of the school year,” she said. “I think the kids are excited to be able to do the social things again like the dances and the football games, so this kind of feels like a kickoff to build some excitement around the fall season and school opening.”

The line of cars in the lot, some creating parking spaces where none existed, substantiated her statement. 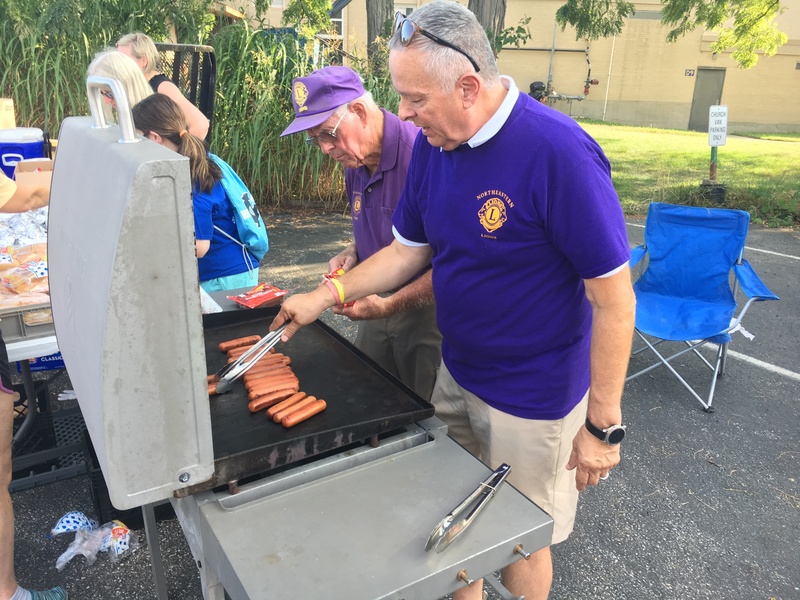 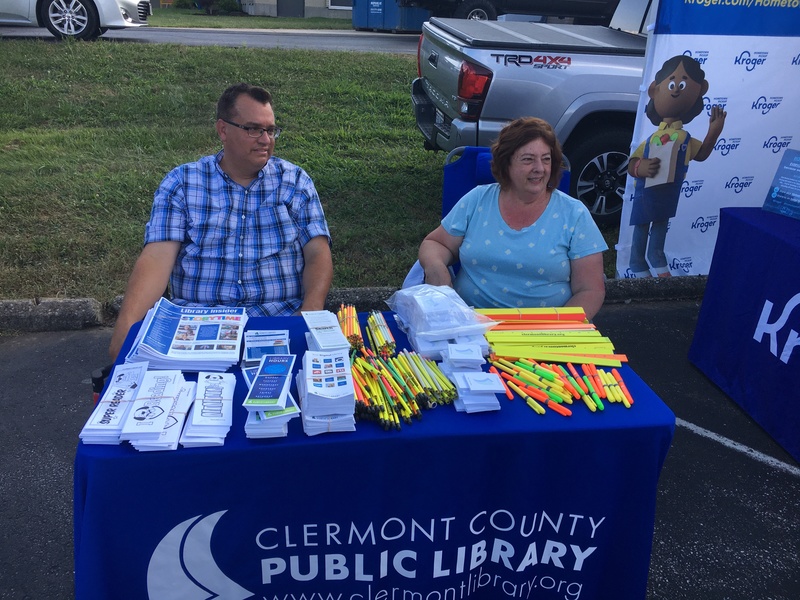 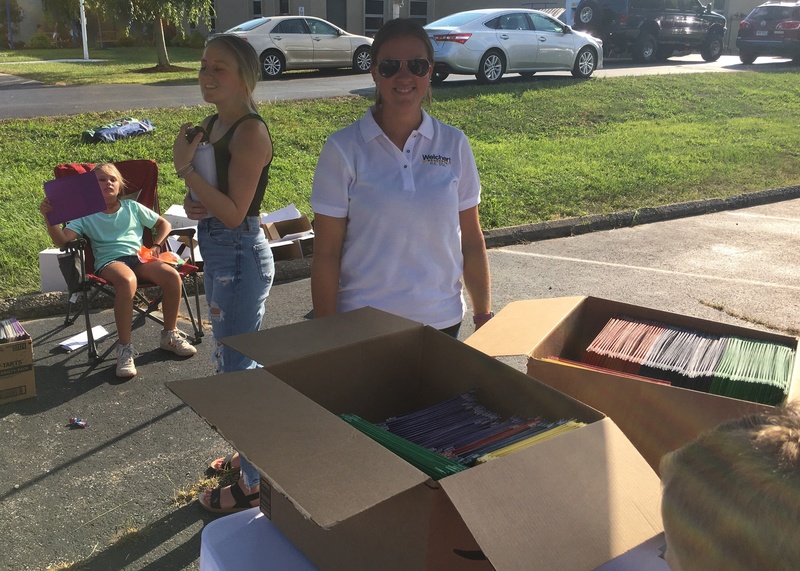