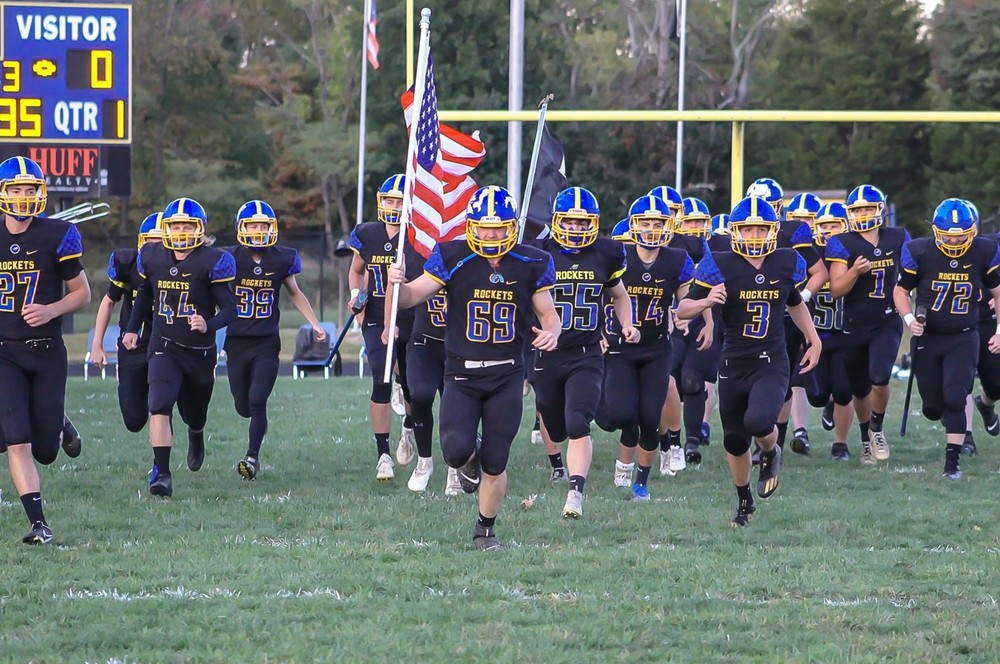 2020 Rockets defined by willingness to compete

“I will take Team 56 into any battle, any time, anywhere. Wins will come but this is a great group of young men. I am proud to be their coach,” Thompson said. The Rockets were 2-8 overall and 1-4 in the Southern Buckeye Academic and Athletic Conference National Division. Thompson talked about the contributions of several Rockets.

Team captain and starting offensive left tackle ran a 25-minute three-mile run during pre-season workouts. “I am willing to bet there isn't any 230-pound lineman in the Tristate area that can do that,” Thompson said. “I will put any of my guys' work ethic and conditioning against any one in the state. I always want to do ‘Ironman Competitions’ with other schools and no one has ever wanted to step up to that challenge.”

Championships are won in the offseason, Thompson said, and he encourages his players to compete in wrestling, noting that in his four years in the program, the team’s top tacklers have all been wrestlers.

“My captain, Hayden Mattes, was no exception. He was my ‘Secretary of Defense’ and came within (half a tackle) of breaking David Pride's single-season record of 71 2019). Mattes along with J.J. Stricker played every single snap this year on all three facets of the game, offense, defense, and special teams.” Stricker moved from defensive line to linebacker this season and led the SBAAC with 13 sacks. His 20 career sacks are second all-time at CNE.

Senior captain Logan Pottorf caught 20 passes, six for touchdowns, and had nine sacks as defensive end. “He had an injury against Batavia where he separated his shoulder that made him miss two games. Nonetheless, he still plays up until halftime where he had one of the best hits of the year on their quarterback with the shoulder still out,” Thompson said.

Landen Amann, CNE’s senior quarterback, set school single-game, single-season and career records despite playing only eight games. He separated his shoulder in the playoff game vs. Preble-Shawnee. Those records were:

• Single game passing yards (299 vs. Blanchester). He also has second place with 294 vs. East Clinton.

• Most passing touchdowns in a single game (four) vs. Summit Country Day.

• Most passing touchdowns in a single season (12).

Another senior, Angus Krug, caught 23 passes, four for touchdowns, and had six sacks playing on the defensive line.

“Angus was a huge threat downfield and really came into his own and was someone who no matter the situation was always keeping a positive attitude and rallying the troops behind him,” Thompson said. “His own teammates selected him as captain this year mid-season. That speaks volumes to their character and what they think of him as a leader. His attitude and work ethic are going to take him far in life.”

With one season remaining, junior receiver Damien Kistler has a chance to set the school record for most receiving yards in a career. He finished 2020 with 681, about 300 behind John Bauer. Kistler has the most consecutive 100-yard game sin school history (four), and second- and third-most receiving yards in a game, with 127 vs. Fayetteville and 124 vs. East Clinton. Junior Kris Jenkins was CNE’s “go-to” receiver and played offense, defense and all special teams.

Senior Jered Glancy tied a school record with a 65-yard punt vs. Bethel-Tate, and had other punts of 61 and 57 yards in that game.

Thompson also mentioned seniors Hunter Vires, Keegan Braun and Jonathan Purcell for having outstanding seasons. Vires switched from running back to linebacker. “I remember asking him and thinking that he may not like it but he was all about it and wanted to do whatever he needed to do to help out his team. A truly selfless act. I was very impressed with that,” Thompson said.

“Keegan Braun is quite possibly one the toughest young men that has ever suited up for us. In his last game wearing Rocket blue, which was our school's first playoff game against Preble Shawnee, he was trying to block a field goal, when we were down 54-14, and he ended up getting kicked in his side. That kick ended up lacerating a kidney. Keegan still played and finished. That was his last game ever. What a warrior. What a way to finish.”

Sophomore Jake Mott is one of the players who will provide the core of the CNE team for the next two seasons. “He was and is going to be a game-changer for us. I am really glad I have another two years with him,” Thompson said. “We are a better team with him on the field. A truly special player, he just seems to find a way to make things happen. Any time he gets the ball in his hands, he's dangerous. Same on defense, he just has a nose for the ball.”

Several freshmen also found time in the varsity lineup in 2020. Andrew McIntosh is the heir-apparent to Mattes at middle linebacker. Mitch Braden was a starting cornerback at the end of the season. Landen Creager saw significant playing time as well. They, along with sophomore center Mason Butler and another sophomore, Zack Hopkins, will enter 2021 with high expectations from their coach.

“Hopkins is a smart kid, he's eventually going to be my cardiologist one day. And that's a good thing because this game definitely gets my blood pressure up,” Thompson said.