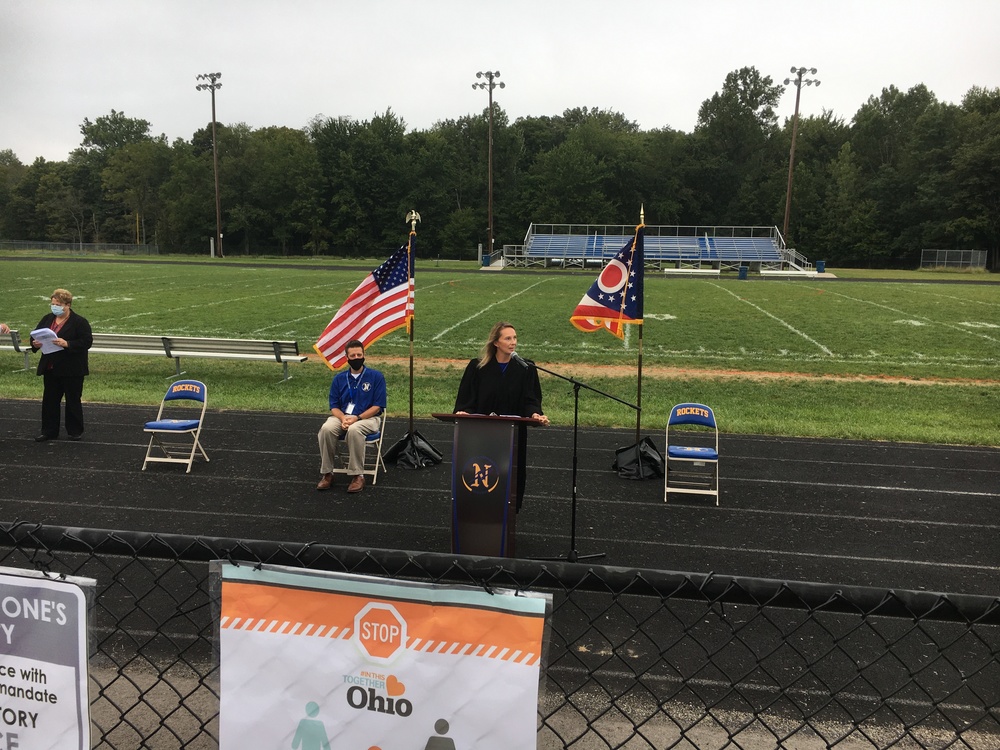 He first traveled more than 4,400 miles, then 30 miles. He waited five years, and then a little longer because of the global pandemic. Finally, in ceremonies as properly solemn as they were celebratory, Yacoub Ba and 49 others became United States citizens Sept. 11 at Clermont Northeastern High School.

Ba, 34, is a native of Mauritania, in West Africa, who now lives in West Chester Township and works as a risk manager for a bank. He talked about his journey – including the scenic drive to Owensville – and significance of the day, less than an hour after taking the oath of citizenship on an overcast, chilly morning, 19 years from the day his new country was attacked.

“Today’s a long journey of many years, for me, wanting to be a part of the United States culture. Why? For me, it’s one of the best countries in the world. I come from a world where we spoke French, and English has always been something that I’ve wanted to speak, and what better way to be a part of the culture that we have here in the United States,” Ba said. “Yes, we have our differences, but it’s still one of the greatest nations that anyone could be a part of. That’s why I’m excited to be here today, going through this process.”

The significance of the date and the circumstances of the times pervaded the event. This is the fourth time CNE has hosted a naturalization ceremony, but the first time the event has been held outside, in the school’s football stadium, under social distancing guidelines. Citizenship candidates, wearing face shields or masks, were scattered throughout the bleachers on the home side; a few family members and friends stood on the field with cameras. High school students watched from their classrooms instead of in-person, as they have done in previous ceremonies in the gymnasium.

U.S. Magistrate Stephanie K. Bowman stood at podium on the track and noted that she usually doesn’t schedule events for Sept. 11.

“It’s a day I usually use as a day of personal reflection,” she said. “When Emily (Hiltz, the naturalization clerk who organized the ceremony) asked if I would be available today to have this ceremony, I thought for a minute, ‘I usually don’t do anything on 9-11,’ but I also recognize how important these are, and I think it’s a good example to set and a good way to remember those who lost their lives on 9-11, 2001.”

Bowman, who has presided over two previous ceremonies at CNE, also noted that none of the students watching were alive that day, and encouraged them to talk with their parents about the meaning of the events.

CNE High School Principal T.J. Glassmeyer said the date was not coincidental, but wishes his students could have witnessed events first-hand.

“It’s not exactly how we want to do it, but based on the current conditions, it’s how we do it. We still wanted our kids to see it and be a part of it, and especially on 9-11, I think it’s special,” Glassmeyer said.

“We actually planned it last September after we had done another one, and they asked if we wanted to do one on Sept. 11, and two of my history teachers (Michael Tabor and Steve Thompson), two of three are Marines, who joined up after 9-11, and they do a tremendous job of talking to our kids about the importance of 9-11 and we thought this would just add to the significance of it,” he said.

Ba does remember 9-11, even though he was almost half a world away.

“Yes, vividly. I was not in the United States at the time, but I remember vividly I was in West Africa at the time and I remember just the fear of it,” he said. “It impacted so many people globally. It wasn’t just a domestic thing, it was a global impact, and having it on this day is just a reflection of the men and women that serve our country and the purpose of anyone that goes through this process understand that you are now part of this fabric and you have to participate, whether through voting or join in the military, do what you can to participate in this democracy.”

Hiltz praised CNE for both its adaptability and its commitment to the naturalization programs, and Bowman presented Glassmeyer with a certificate of appreciation signed by federal judges.

“This school is so wonderful as to say we can use the gym if we aren’t able to do this (outside). Normally our Clermont Northeastern High School families are in the gym, you know how much fun they are. The students watch, the band is involved, the scout troops,” Hiltz said.

Previous ceremonies at CNE included representatives of various political figures, as well as a delegation from the Sons of the American Revolution. Three members of the League for Women Voters helped register the new citizens, who are now eligible to vote. Ba plans to do just that.

“Yes, I will be involved. I’ve always been a fan of American politics, but now that I’m a United States citizen, it’s one of those things that I’m going to do more of. Now, whether that’s running for public office or not, that is to be determined, but I will be involved in that process,” he said.

The United States District Court for the Southern District of Ohio includes 48 of the state’s 88 counties, and Hiltz noted that some of the new citizens sworn at CNE came from as far away as Scioto and Lawrence counties.