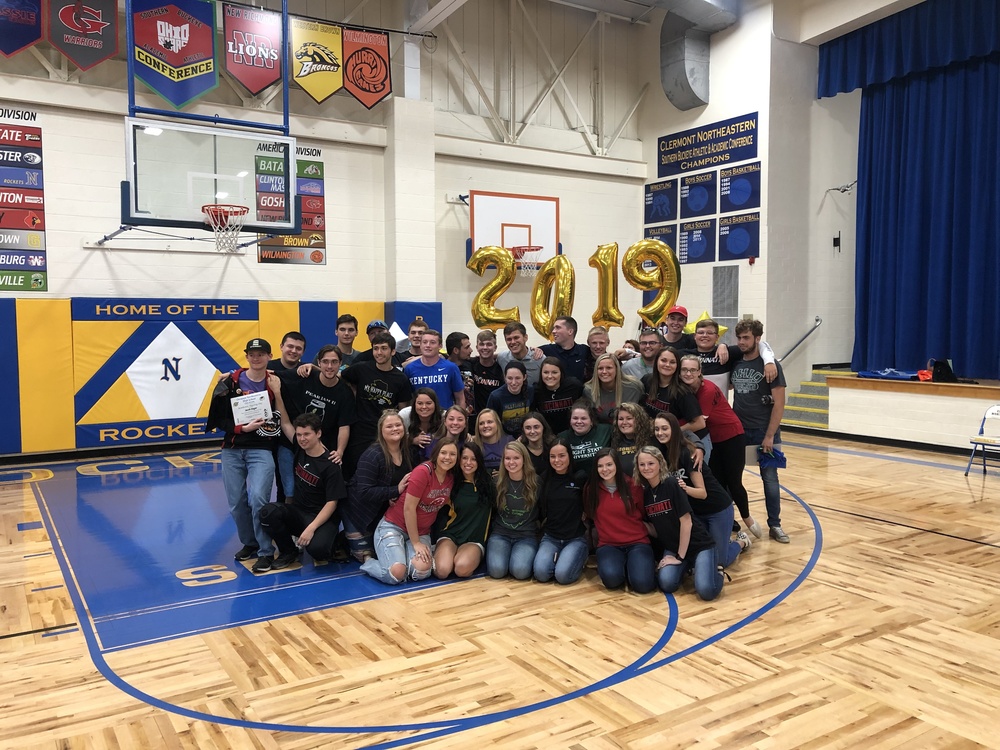 His happy place more than 3,300 miles away, Braeden Ortega sat with 37 other Clermont Northeastern High School seniors on the gymnasium floor May 14, waiting to unofficially begin the next phase in his life. His uncle, Jim Sprague, sat in a row of chairs wearing a bright aqua shirt with the name of a school he did not attend, in a state which he has never visited.

Ortega would be the first student called to sign his name to a college acceptance letter as the high school hosted its third annual Senior Signing Ceremony, accorded the honor not because of distance to his chosen school, but because of where it ranked alphabetically.

Aug. 12, Ortega will leave for the University of Alaska-Southeast, in Juneau. Lest anyone doubt his choice, Ortega’s shirt affirmed the commitment – an outline of the state of Alaska, with a star where Juneau would be, with the words “My Happy Place.”

Sprague was the “designated representative” for the school – other family members were unavailable and, not all that surprisingly, the school did not send anyone to the ceremony.

“We were surprised he chose that to be so far away from home, but at the same time we’re excited for him to go out and explore something totally different than what he’s used to living in and impact the environment,” Sprague said.

“He likes to explore. Our family travels a lot, so I think that was one of the things that was behind his decision to get out to a different area to go to school.”

Ortega’s father served four years in the Air Force in Alaska, and told his son about the beauty of the area. Braeden Ortega visited the school and liked what he saw. Alaska-Southeast is known for its fisheries and ocean sciences program.

“I plan to become a Texas game warden, and they have fishery and ocean science program there, so I’m really excited to complete that program and come back down to the lower 48 and become a game warden,” Ortega said, describing himself as a “little nervous, but also a little excited.”

Drake Clevenger’s journey will take him in an entirely different direction, geographically and otherwise. He is joining the United States Marines and will report to Parris Island, South Carolina, for basic training July 29.

His interest in a military career began early.

“It all started when I was probably 6-years-old when I knew my grandfather was in the United States Military and then his brother were in it and his sister was also in Vietnam, so I have a pretty long history of military in the family, so that’s kind of how it all started. Mostly the reason I’m joining is because I want to better myself and also want to bring up a challenge and I want to serve my country,” Clevenger said.

“My MOS will be infantry, so I will be serving for eight years - four years active, four years reserve.”

These are the types of stories and decisions the school hopes to foster and encourage with the signing ceremony, intervention specialist Jill Stegemann said. She helped organize the event, along with counselor Amy Gillio.

“So a few years ago this was a national initiative to recognize not just athletes who sign, but students who were going to continue their education and training,” Stegemann said.

The CNE Education Foundation provided a grant, which was used to buy personalized Tshirts, in CNE blue and gold, for each of the seniors who signed up for the event. Stegemann said some seniors have yet to decide their next step; others already are in full-time post-secondary programs at schools such as University of. Cincinnati or Chatfield College. The school band plays as each student is introduced; the students sit at a table in front of a CNE backdrop, sign the letter, meet a representative of the school (official or otherwise), then sign a poster which lists all of the colleges chosen, and receive their shirt.

“As you can see our band makes it what it is. It’s a lot of fun. Our kids enjoy it. It just allows them to be recognized for continuing their education,” Stegemann said.

Gillio said her role is to help students with their decisions, including processing paperwork and making sure they are on track to graduate.

“They ask all kinds of questions, so it’s hard to put all of them in one category, but I think a lot of kids get caught up in trying to make the right choice. ‘Do I go to this school or do I do this plan?’ ‘My mom wants me to do this. I want to do this,’” Gillio said.

“There’s a lot of back and forth like that, and what I try to do is talk to the kids about is they have to trust their gut, and they have to do the things now to set themselves up for all of the opportunities that they might have, but a lot of the things we talk about is that nothing’s permanent. You can start to plan right now, but there’s always room for change in life, and not just to be pigeonholed into the same thing.”

This year’s event was significant for Gillio because she, CNE High School Principal T.J. Glassmeyer, Assistant Principal Scott Houp and Superintendent Michael Brandt all started with the district four years ago.

“This group was freshmen when we started, so this is the first we’ve seen all the way through, so this was really special for me this year,” Gillio said.

“And this is a smaller class, the class of 2019, so it’s about average for what we normally have,” Stegemann said.

Two of the seniors received athletic scholarships. Tommy Averwater for archery to Union College (Kentucky) and Olivia Bricker for softball to Wright State. Clevenger and Josh Breehne are both joining the Marines.

The list of Clermont Northeastern seniors who signed with colleges May 14 (by school):