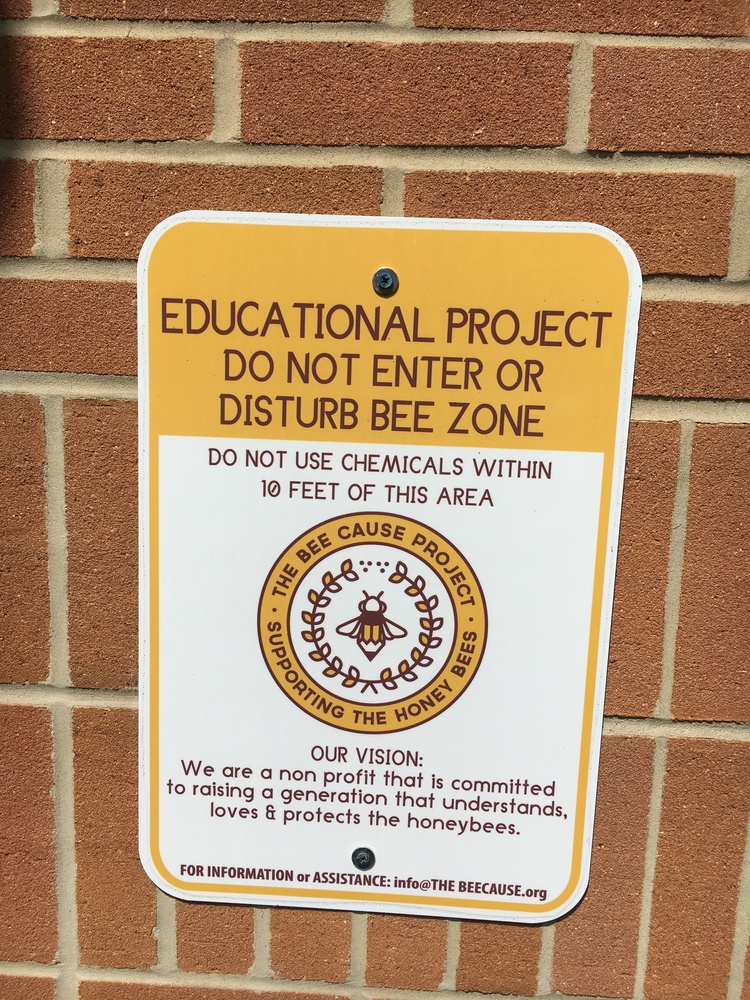 There’s a battle forming outside Scott Well’s classroom window at Clermont Northeastern High School. Students organized it and are observing it, and some have even picked sides. The Cincinnati Nature Center put up a $500 “purse,” and the winners may eventually be invited inside the room – hundreds, if not thousands, of them, gathered in the front corner near the desk.

“When I was in ninth-grade, we got this beehive over there, it’s an observation hive, and I remember sitting in this classroom and always staring at it, and when were told that we were able to work on grants from the Nature Center, the hive had just collapsed, and there were a ton of bees that were dead and you went outside and saw all of them on the ground, and it was really sad, so when we were told that were able to work on a grant, we immediately thought, ‘Why don’t we do something to help the bees in our hive?’” Twine said.

The students are using the Nature Center grant to buy native and non-native flowers that they plant next to the building, near the entrance to the observation hive.

Clevenger, who has his own beehive at home, thinks he knows what might happen.

“We’re probably thinking that more of the native and the honey bees will go after our native flowers,” Clevenger said. “We’re kind of hoping we will see more interaction with the non-native than the native flowers that we have, so we can contribute them to local beekeepers to help the growth out to their hives.”

Hoeppner said the competition between the bees has surprised him.

“I didn’t know that they’d compete for the same flowers. I figured they had their own set of flowers they’d go to without competing, so I learned that,” he said.

Students eventually could propagate the seeds of the more popular plants and set up a market, to sell them, Wells said.

Clevenger, Twine, Hoeppner and Curran comprise one of six groups in the zoology and conservation class working on projects that Wells hopes extend well beyond this school year. Junior Connor Nowell, Hannah Rosen and Patton Collins have taken an interest in the pond on the Clermont Northeastern campus.

“One of (the students) was looking at our pond quality and because the general consensus with the student population is that the pond is gross, if you jumped in you’d get severely sick … so we’ve been doing some things. We stocked it up with some fish, and he’s actually going to start monitoring, and we’ve been removing honeysuckle because we heard when honeysuckle leaves fall into the water it can become toxic and it can cause turnover of the pond, so we’ve been removing some thing and we’ve basically been tracking the ecology and how it actually gets healthier,” Wells said.

Nowell said his group chose the pond because of its importance to the CNE campus.

“Because everyone else is doing stuff with either plants or native species and pollinators, we wanted to do something a little different and the pond is a big part of the ecosystem on our campus and a lot of the student body has some pretty bad opinions about the pond,” he said.

Rosen said the group is testing pH levels and hopes to get out on the pond to see what organisms live there, if they have the proper tools.

“We also have a testing kit for all of our stuff. I tested it and they were all expired …” she said.

Those two groups presented their findings at Cincinnati Nature Center-sponsored summit at Sycamore High School earlier this year. Wells characterized the projects as “citizen science projects,” and said they will continue long after the current students have graduated.

“This is going to be incorporated to where, the plan is we get some really, really quality ones, future classes are going to be doing this, so we’re hoping that a lot of these studies will be 20-year long studies, collecting data and doing observations and stuff,” Wells said.

The goal – long after the final reports are presented later this month – is to inspire a new generation of conservation stewards whose focus extends far beyond school grounds.

“I think … the biggest surprise for me is that it starts to impact their daily life,” wells said. “One of the big things is we were looking at invasive species and honeysuckle, and now most of them have commented that they hate me on the fact that everywhere they drive now they get irritated seeing all the honeysuckle and how it’s outcompeting … They’re more aware of everything going on around them and I feel they are more aware of the impact of their daily choices with what they do at their houses and around their ponds and things like that.”

As for the currently dormant observation hive, it turns out you can order bees for delivery – a word of warning for whoever handles packages in the CNE office.