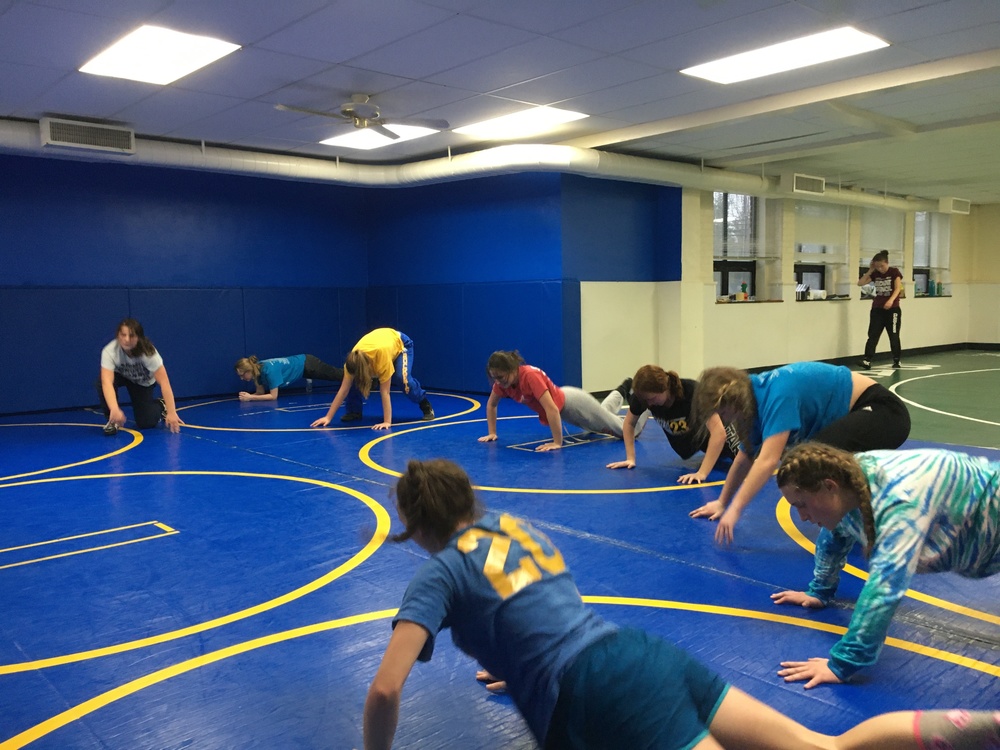 One was looking for something to do between fall and spring seasons. Another came out with her sister. One has a brother on the team and joked that it would be “nice to beat him up.” And the one who started it all preferred competing to watching from the sidelines.

The members of Clermont Northeastern High School’s first girls wrestling team have many and varied reasons for competing in the sport, but also have one thing in common – a place in history. CNE is fielding a girls team for the first time in 2020-2021. (Technically, CNE’s is a co-ed program, with girls listed on the boys team roster and eligible to compete in boys matches. CNE has had girls compete on the boys team in past seasons.)

They practice together, in the wrestling room on the ground floor of the old CNE Elementary School in Owensville. The space is a converted cafeteria, with mats spread to the walls on all four sides and pillars separating spaces – boys at one end, girls at another. Coach Scott Wells sits between the two groups, or moves back and forth, as his assistants share instruction.

“I thought it was going to be a little more difficult than it is. They just want to be out here and wrestle,” Wells said. “They’re just like anybody else. There hasn’t been any real challenges that I have come across yet. There’s no real drama or no real anything else that, they’re just wrestlers. They step out there, it doesn’t matter, gender or anything. They just want to come out there and compete and have fun.”

The Ohio State Wrestling Coaches Association conducted its first state tournament in 2020. Nationally, the sport is growing. In 2018-2019, the most recent season for which numbers are available, there were more than 21,000 girls wrestling at the high school level – an increase of more than 4,500 from the prior season, according to the National Federation of State High School Associations. Wells said CNE wanted to be in the forefront of the movement.

Junior Hanna Groeber is perhaps most responsible for CNE’s program. Her brother, Jacob, wrestles at CNE and Hannah was a statistician for the varsity team last season.

“I started wrestling because my brother’s done it and I took stats the last year and I had a lot of fun and I always wanted to wrestle, but not necessarily with boys, so I tried to get a team together, and now we’re all here.”

Groeber convinced nine others. Only one, junior Haili Kirkland, has varsity experience. She wrestled at Milford last season. Groeber has practiced with the boys team, but did not compete before this season.

“She fell in love with the sport of wrestling, and she would come out and she would practice every once in a while, and she said, ‘I really want to have a girls team,’” Wells said. “So she started recruiting and he has been, basically, the best ambassador we’ve had for this sport in a while. She is in that school building just talking it up, and he got a lot of girls to come out, and they’re having a blast with it and it’s kind of carried over.”

Every class is represented on the roster – three seniors, four juniors, two sophomores and a freshman. Two of the members are sisters – senior Emma Stephan and sophomore Ivy Stephan.

“I always thought it would be cool to wrestle, but I never wanted to wrestle boys,” Ivy said.

“I’m in wrestling because I thought it would be fun for my senior year, and my mom said that I had to wrestle with my sister,” Emma said.

Junior Hannah Heller came out because she wanted something to do during the “offseason” between fall and spring sports. Wells said one reason girls wrestling has become so popular is because there are few other winter options.

“During this time it’s really only basketball that they’re competing with, they don’t have a lot of opportunities for all kinds of different sports, so one of those things they kind of just make that jump and want to give it a whirl,” Wells said.

Competing as one program has its advantages. The boys and girls practice together – albeit in separate groups – and the boys will often help demonstrate moves. The lack of experience among the girls is not a big obstacle, according to Wells.

“We deal with that with the boys too. I have a lot of first-year guys. That’s been one of the challenges. With the boys I can just throw them to the wolves, you know what I’m saying? They’re first-year kids, but I always have experience on the team. But this has been one of the struggles I guess I should say, because nobody really does know what they’re doing, so we have to slow it down for everybody.”

Freshman Jesse Foebar said Wells has done a good job making the sport simple. “Our first match was kind of nerve wracking. I think that was our biggest hurdle to get over was kind of like the first time being out there, but now that it’s over, it’s pretty fun,” she said. Junior Amber Averwater said the most difficult part for her has been “making sure you finish a move so you don’t just start it and kind of let it go, and definitely not getting crushed by everybody because I’m definitely the smallest and I normally get pinned pretty quickly.”

Finding competition is another challenge. While many schools have girl wrestlers, few field complete teams, and coaches have to take matches where they can find them. CNE is traveling this season to Columbus and Olentangy, and Wells has reached out to Mason as well as Southern Buckeye Athletic and Academic Conference rivals Bethel-Tate and Western Brown, both of whom have girls teams.

The pandemic has complicated scheduling, as most tournaments are limiting the number of participants, so teams are competing in more dual events. In some cases, girls are wrestling opponents or two weight classes away from their own, just to get experience. Winning and losing is secondary, for now. Just having a team is itself a victory.

“I would say the part that I like about it is the bond that I’m forming with the girls,” senior Kylie Prather said. “We’re all becoming really close.”