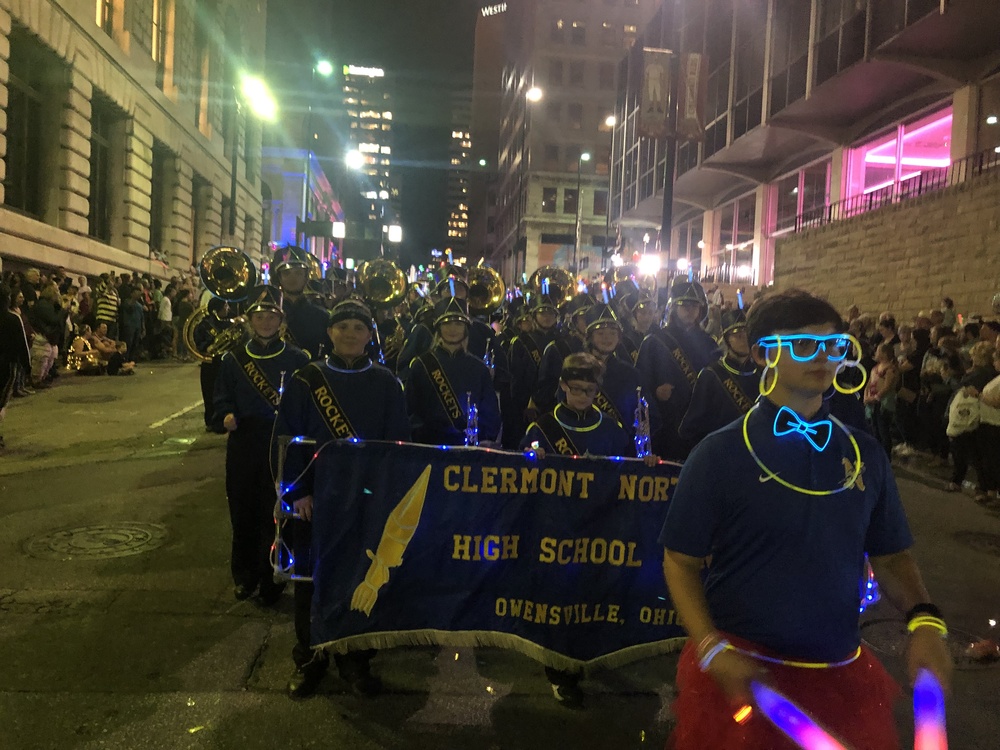 Clermont Northeastern High School’s marching band was among 90 or so groups that participated in the opening parade for the second Blink Cincinnati light-based art festival Oct. 10 Downtown. CNE also marched in the first event in 2017, and found it easy to get in the spirit in its return.

Band Director Chris Moore took 95 of his 105-member unit to Blink (some had conflicts with other extracurricular activities), and they were prepared.

“We added a lot more lights to it. We added spot bass drum lights, when you hit the bass drum, the drums light up. We had light-up sticks. I’ve kind of gone to a theme that when we do things like the parade, we’re going to do things fast that are good things,” Moore said. The playlist included high-energy songs such as ‘Fireball” (Pitbull), “Let’s Get it Started” (Black-Eyed Peas), “Party Rock” (LMFAO) and “Juice” (Lizzo).

“I want to showcase our best stuff. So we have kind of the same things that if I was deejaying it’s the songs that would be our top hits that everybody wants to hear,” Moore said.

“It was really fun. It was cool seeing all the different people there, seeing it and being a part of something like that,” Brown said.

“Party Rock” was also a favorite of senior saxophonist Foster Kuntz, who noted the differences between Blink 2017 and Blink 2019.

“I think it was a lot more fun than the first time because it was way more organized for sure and there were a lot more people there and it was really cool to see a lot of bands there besides just us and maybe one other bands that we saw,” Kuntz said. “We saw a lot of different bands there and they all had lights on their instruments.”

This was also the second Blink performance for sousaphonist/tuba player Tierra Tuneberg. One of her favorite memories happened before the parade.

“When we were standing around before the parade started because we had to get there super early, the skaters came by with their float of a lampshade that lit up. I thought that was cool because it was giant,” she said.

The parade started near Garfield Place, on Vine Street at Eighth, and proceeded due south, ending at Freedom Way, two blocks from Great American Ball Park, where the band posed for a group photo in front of the 1869 Red Stockings Pavilion. Along the way, they played to an appreciative and enthusiastic crowd, unrushed by the normal constraints imposed in parades.

“It was cool because it was a different type of parade. They told us to leave space between us and the group that was in front of us,” Moore said. “Normally there’s people trying to push you through, police, because they’re shutting down the roads, they’re like ‘Get this over with.’ So they actually were like ‘Take your time.’”

As a biennial event, Blink fits nicely into the band’s schedule. Moore takes them to Disney World every other year (they went in the spring of 2019), and welcomes any opportunity to get them exposure away from the CNE campus.

“It was a great experience for the kids. Anytime I get an opportunity to take the kids somewhere else. Going Downtown, not everybody always goes Downtown,” Moore said. “Performing at Disney and this, they’re right there next to each other.”

Moore has participated in the Macy’s Thanksgiving Day Parade, which may be the ultimate experience for marching bands. He said Blink compares favorably.

“It’s just a notch below that parade. Great experience for our kids. So many people down there. Playing to a great crowd, a crowd that really appreciates us. Being on TV. We got to stop right in front of the camera,” Moore said.

Blink continued a busy and successful fall for the Marching Rockets, who participated in the Little Miami Band Show Sept. 7; the drumline is preparing for the 2019 Percussive Arts Society International Convention Drumline Battle Nov. 15 in Indianapolis.