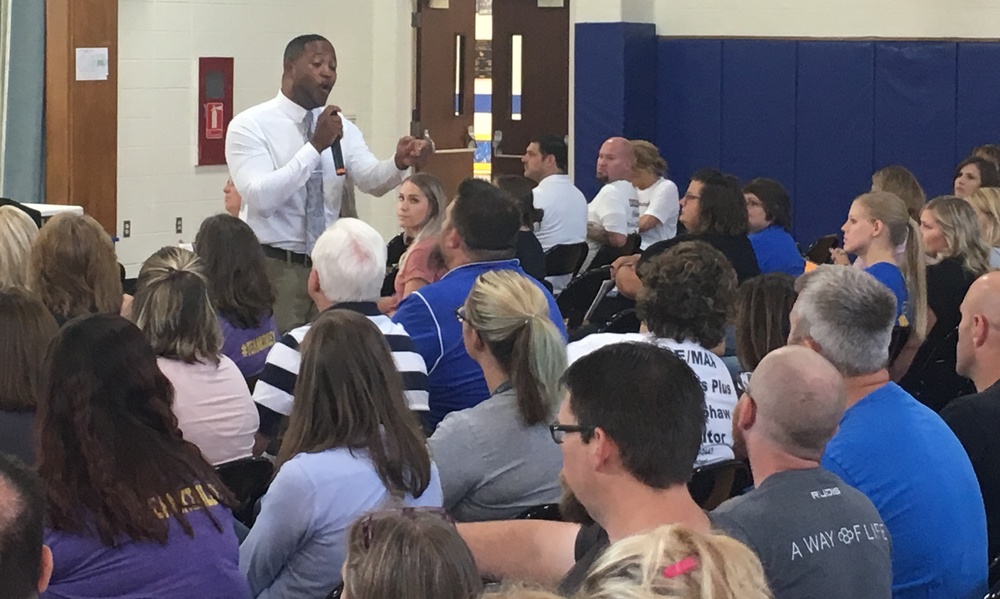 Clermont Northeastern School District students may be interested to know that several of their teachers are turkeys.

Others are green bean casserole. Some are pie, or even gravy.

The first day of school was still three days away and outside temperatures were near 90 degrees, so staff focused on Thanksgiving dinner during a professional development day Aug. 16 at CNE Middle School.

Jackson, whose company uses the hashtag #iamspeaklove, is a Loveland High School graduate and former high school football coach who founded his own company in 2012, thanks to help from Cincinnati Bengal legends Cris Collinsworth and Anthony Munoz. He presents to schools and larger companies, focusing on efficiency and cultural competency. His school-specific message is crucial in a changing education environment.

“They’re the lifeblood of our community. They’re the future,” Jackson said of teachers. “We focus so much on student test scores, we need our teachers to love themselves, and for our teachers to have the foundation at home so they can do the job they’re called to do, and this support opens up an opportunity to not only be great for your kids, but to be great for your district.”

Social media and the internet have dramatically changed the role of teachers, Jackson said.

“You don’t need a teacher anymore, you can learn everything on YouTube. So what they bring now isn’t information, information is free. What they bring is the personal touch and how to actually do it. So teachers have had to change their operational strategy because education has moved from information knowledge to application and touch,” Jackson said.

CNE Dean of Students T.J. Dorsey arranged Jackson’s appearance. Dorsey has been coordinating the district PBIS – Positive Behaviors Interventions and Support program, for which it was honored last year by the state of Ohio.

“Seeing a lot of things he has done over the year with other school districts really inspired us to go after getting him to be someone that could help tie all the work that we’ve been doing over the last four years all together,” Dorsey said. “Individual identity is as important as the whole building’s, the whole culture’s identity as well. The things that each individual can bring to the table adds to the dynamics of the whole team.”

Jackson’s talk resonated, as many staff members hugged him after the presentation. He hopes that emotion translates to the classroom.

“That’s so crazy. It’s so weird to get that. So much of it is them seeing how beautiful they are, so it’s very important that they speak love to themselves, so sometimes when they bring that love to me, I feel almost ashamed, but it’s not me, but it feels really good. What I want moreso than anything else is for them not necessarily to hug me, but to hug their kids and build their kids up in that special way that we need the most. Right now it’s crucial,” he said.

Julia Harmon, a clinical counselor at Cincinnati Children’s Hospital Medical Center, followed Jackson and discussed the Trauma Informed Care (TIC) initiative in schools. Her talk built on Jackson’s, emphasizing the importance of relationships in identifying and dealing with potentially troubled students, and fostering a safer environment.

“Supportive adult relationships are the most important part. Our kids come in with a lot of baggage, but you can make a difference in a kid’s life through having a supportive, positive relationship and remembering these kids come from all kinds of backgrounds and heartaches,” Harmon said.

As Dorsey and the district promote “The Rocket Way,” the staff development was another step. They also participated in a scavenger hunt during the afternoon session.

“Relationships matter is the most important thing to take away from this. That’s the key to everything we do. To move our work in The Rocket Way further and further along, we have to focus more and more on relationship building and the community that we can build here. High levels of trust with high levels of expectations,” Dorsey said.

Just like a family joining together for a holiday meal.