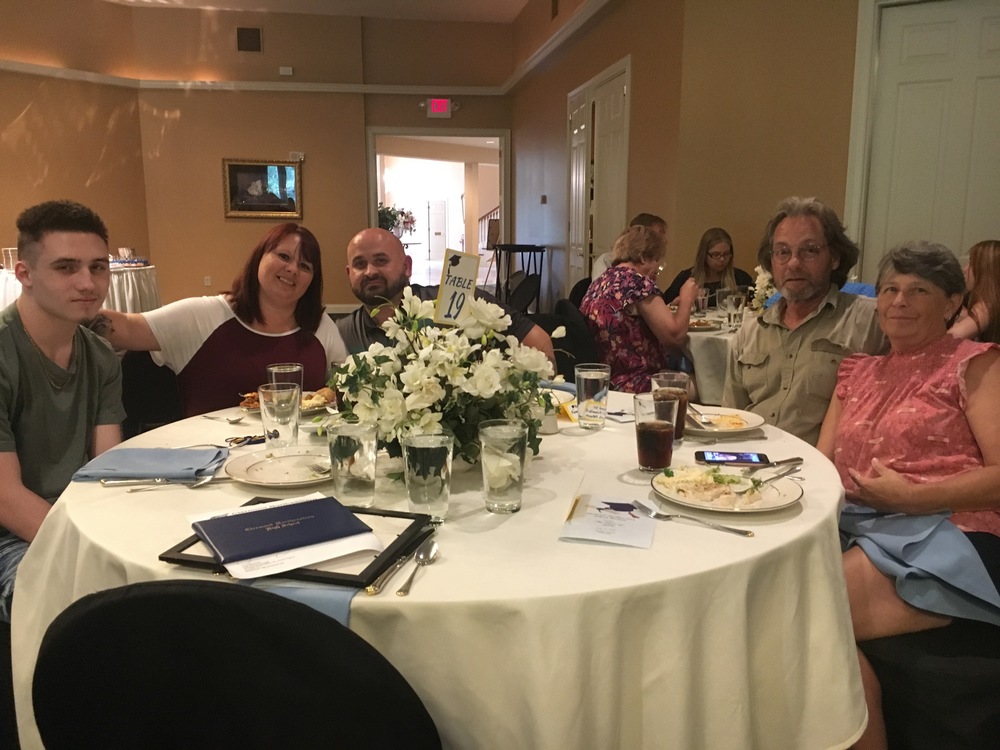 Veronica Jenkins and her family – husband Oscar and father Kenneth Alley, and friend Cheryl Taylor, were seated near the front of the room about 30 minutes before the evening’s scheduled event. Erin Jenkins – Veronica and Oscar’s daughter – was one of 16 people (there were 21 total in the most recent class) who would soon receive their high school diplomas from Clermont Northeastern High School as part of the district’s Adult 22-Plus Program.

This was the third Adult 22-Plus graduation ceremony. The first was in June 2018; the second in January 2019. Seventy-three people have received diplomas through the program.

Jenkins recalled the day nine years earlier when her daughter’s education was sidetracked.

Erin Jenkins was in the 10th-grade. She had a learning disability and her district was having trouble accommodating her.

“The school kicked her out, unannounced, just called me up one day and said we can’t handle her,” Veronica Jenkins said.

That came three years after Erin’s older brother Alex died. She was the first to find him, and suffered from Post Traumatic Stress Syndrome since.

“She found him. He did the unthinkable and she found him, she got the PTSD with that. For her to struggle through and to get on and move on with that, and she knows her brother helped her through it, get into this, this is a big accomplishment for her,” Veronica said.

Alex and Erin were three years apart. “They were like Buddy and Sissy. They were just so close,” their mother said.

Most recently Erin has been in Clermont County’s Developmental Disabilities program, with failed attempts in a community college and at Live Oaks.

“They said she was too slow to learn there, so they wouldn’t accept her there. She went over to Live Oaks to get that education, she was too slow there,” Veronica Jenkins said. She read about the 22-Plus program in a local newspaper, and talked with Erin. They approached program coordinator Bob Havrilla.

“She’s like ‘Oh, I want to do it Mom. I want to do it. I want to get it done.’ So I got her involved in it. I backed her, I helped her through what she needed to do it all, and with Bob’s help, it was just so wonderful to be able to do what he told her.

“This is a huge accomplishment. When other classes, schools, would not even accept her, and help her through it to accomplish this, this is something very, very huge for her. And she never wanted the GED, she always wanted (the diploma).

gives adults 22-and-older the chance to complete their high school course of study and earn a diploma.”

Erin, who will be 26 in July, is looking for work. She has applied at Country Diner in Sardinia, among other places. While looking forward, she acknowledged the difficulty of the last nine years.

“It means a lot to me. The only thing I can think of is as long as my family is here, and my friends, that’s all that really counts,” she said.

“It’s been rough. I’ve accomplished a lot since then.”

Joseph Alexander left Woodward High School in the 1980s. For 30 years, he avoided facing the truth about his educational background.

“I just pretty much lost interest. It was back in the ‘80s and I had a job then and I felt like that’s more important, but I was totally wrong, because I lived with this all of my life, until today,” he said, admitting that he would lie to people about having a high school diploma.

He most recently worked for Croswell VIP Motorcoach Services. The company did a round of layoffs, and Alexander accepted.

“It was kind of a mutual thing. I kept having this feeling that I needed to do more and there was an opportunity for a layoff and I know it’s going to sound kind of weird, but I actually took it, took my layoff, to do this. I don’t know where I’m going next, but I know I’m going somewhere else,” he said.

Jim Adkins, Alexander’s brother-in-law, was among those attending the graduation. He told the story about how Alexander took his mother, who lives in the Cincinnati neighborhood of Westwood, shopping one day and found a wallet with $20 and a couple of credit cards inside.

“He seen the name of the person, and instead of doing something with the wallet, that man took his mother home and took that wallet and went to that address, where that family was, and made sure that that family got that wallet back, with everything that was in it. He stopped everything he was doing and made sure. That’s the kind of man that Joe is,” Adkins said.

Angela Moore was a Taylor High School student attending Diamond Oaks when her father told her get a job and pay the family bills, or move out. Now 40, she is engaged and can return to work as a high school graduate.

“It means a whole new future for myself and my family. I showed my son, hey, no matter how long it takes, you can do it,” Moore said. Moore’s son, McCaulay Colwell, was at the event.

Brandon Minor, Moore’s fiancé, told her about the program.

“I actually found it. She came to me several times and said ‘Hey, I want to get my GED, I want to get my GED,’ and then I happened to stumble upon this program through the Ohio Board of Education web site and then I told her about it and we got everything ready and she was really excited to get it done. It took her a month, if that. I have to give her credit. She finished,’” Minor said.

Jennifer Minor, Brandon’s mother and Angela’s future mother-in-law, was among her supporters.

“I’m just really excited to see her finishing something, completing it. It’s a good example for the kids, and it’s amazing what that little piece of paper means, and I’m just so proud of her for doing it,” Jennifer Minor said.

Jenkins, Alexander and Minor, and their “classmates,” may have an advantage in the workforce over those who took traditional paths to a high school diploma, Clermont County Prosecuting Attorney Vince Faris said. Faris was the keynote speaker at the graduation.

“I really do believe that this is the type of thing on their resume that will at least get the attention of a future employer,” Faris said. “He’s going to look, ‘Well, wait a minute, why didn’t you get your diploma until you were 30?’ And if they tell a good story and the future employer thinks they have the drive and the willpower to go back and do it, I think it’s going to be a great help.”

The third Adult-22 Plus graduation was the first with students from the PEEP work readiness program at Child Focus, a head start center in Mount Carmel. Work readiness coordinator Alex Bixler was one of several Child Focus representatives at the graduation. PEEP stands for people Exploring Education/Employment Pathways.