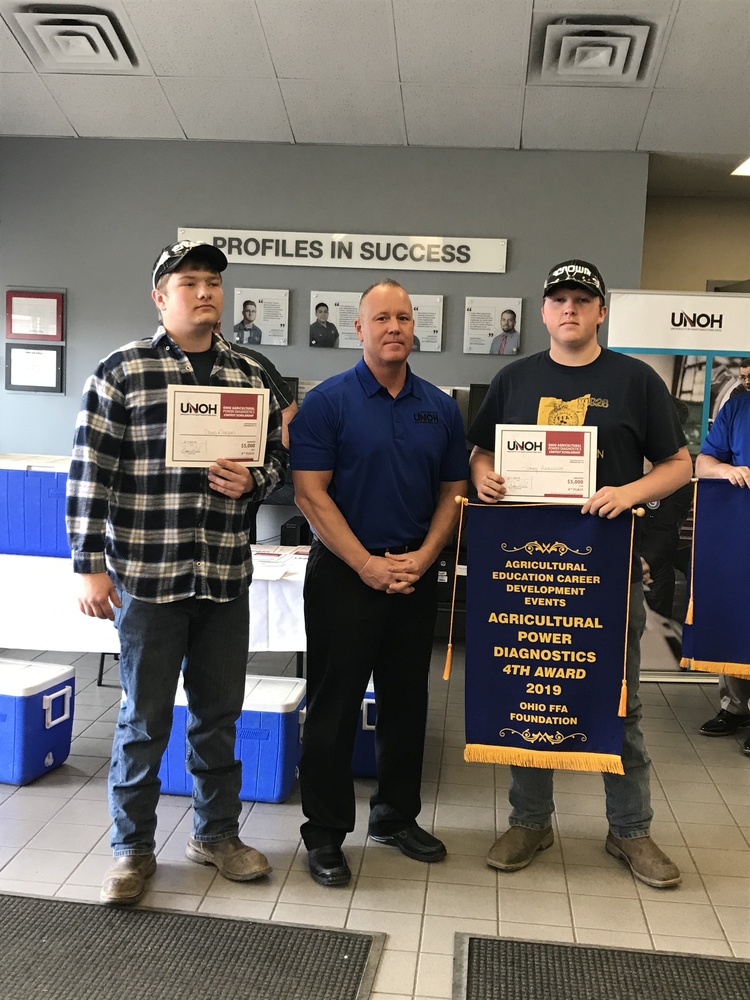 Tommy Averwater and Doug Morgan know both, and they proved that in the Ohio Agricultural Power Diagnostics event March 1 at University of Northwestern Ohio in Lima, placing fourth in the state and each earning a $5,000 scholarship.

The Clermont Northeastern High School seniors are members of CNE’s FFA chapter and earned a trip to the state competition by winning the district in Wilmington Feb. 14.

What exactly is power diagnostics?

“Basically an event where they have five stations and it’s all tractors, farm equipment, and each unit of equipment has two bugs or two problems that need to be fixed,” Averwater said. “You have 20 minutes to fix both bugs, and you get points based on how much time you have left and the questions you ask.”

Friends for many years, Averwater and Morgan were encouraged by friends to become involved in diagnostics competition.

“It kind of started by accident, if you want the truth,” Morgan said.

“We started doing it our sophomore year and we didn’t do so well that year because we kind of got into it late. The competition is normally in the middle of February. We started out, we had maybe three weeks before the competition, and I think we got 10th place our first year, and we came back in the next year, last year, we got into it a little bit early, we started the end of December probably practicing, working on things, learning how to do diagnostics test on equipment, and basically learning how to fix stuff,” Averwater said.

There are five stations of competition. Teams have one minute to assess a “work order” detailing the problem at each station, and 20 minutes to diagnose and fix the two problems at each station.

“Some of the equipment had computers sitting them with manuals pulled up on the computers where you, normally if the computer was there, most likely you need to use the computer to figure out what was wrong with the equipment, and it was all different bugs. There wasn’t one alike,” Averwater said. “Then you need to go through the procedures and steps to figure out what needs fixed, what’s wrong, you have to figure out what’s wrong first, diagnose it, then tell the judge, and they’ll give you points, and then most of the time if it has to be fixed, they’ll give you points too for fixing it in the time.”

Morgan, who said his everyday life “consists of working on stuff, maintaining equipment,” said the biggest adjustment for him and Averwater was “doing it by the book, because everything we’ve always done has been shadetree mechanic type of stuff, just fix it to where it works, not the right way, by the book.”

The book, in this case, is the operator’s manual for the equipment – tractors at district, heavier equipment, including semis, at state. Averwater and Morgan, though, say experience is the best teacher.

“I would definitely say be sharp on knowledge of basically different components of a tractor, like engine parts and hydraulics, and different electrical … knowing your stuff is the biggest thing, because you need that knowledge, you have to have that knowledge right there. You can go to the computer and go through the computer and figure out what you need to do, but it’s better if you practice and you have experience with it. It’s right here instead of in a computer,” he said, pointing to his head. “It saves you time.”

Time, more than a lack of knowledge, is often their biggest obstacle. At district, they resolved all problems except one. They ran out of time.

“We were on track to get it. We needed like literally another minute and we would have had it,” Morgan said.

“I wouldn’t say there was anything that really stumped us. It was a matter of just going through the right procedures to see what was wrong was what took the time. Two of the tractors that we actually finished in four minutes. That’s pretty quick,” Averwater said.

Their achievements are made more impressive by the competition, which includes a number of career schools.

“These kids are learning to be industrial diesel mechanics,” Morgan said.

As members of FFA, Averwater and Morgan participate in programs such as agriculture (“ag”) days at elementary schools, soil judging and livestock judging, and showing animals at the Clermont County Fair. CNE agricultural instructor David Jelley said Averwater and Morgan have been important parts of the growth of FFA at the school.

“The boys have been very easy to work with these past three years. They have been strong leaders in the FFA,” Jelley said. “Any activities that the chapter is involved in, they are always ready to help out. They have helped CNE FFA to move ahead.”

Averwater, who also competes in bowling for CNE (he qualified for the Division II State Tournament March 2) and signed an archery letter-of-intent with Union College, said the best part of being in FFA is “the friendships and the experiences. That’s the biggest thing, because we do some pretty cool stuff. Not as a large group, but there are six or seven of us that are pretty involved in FFA and we do a lot of stuff. We all do it together, so it’s kind of … it’s a different experience,” Averwater said.

Morgan, who plans to begin a career after high school, spends a lot of time “messing” with vehicles, including a “couple of old pickup trucks from the ‘60s, and an old jeep,” said he is friends with people that graduated his freshman year.

“I still talk with them because I know them through FFA,” Morgan said.