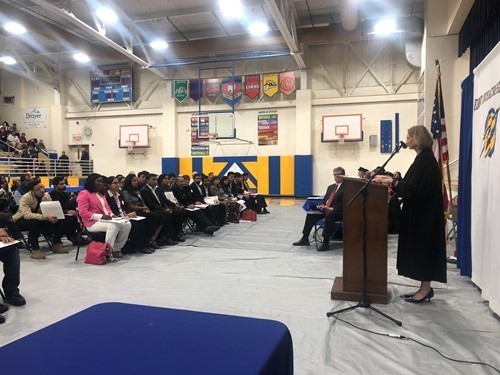 Shortly before 1 p.m. Nov. 2, citizens of more than 30 countries filed into the gymnasium at Clermont Northeastern High School. About 45 minutes, they left as citizens of one.

This was the second year that CNE has hosted a naturalization ceremony at the high school. While this one took place more than two-and-a-half months after it was originally scheduled, because of damage to the high school gymnasium floor, the pomp of the proceedings was not diminished, and the circumstances just as meaningful.

The gymnasium was officially declared a courtroom; representatives of two Clermont County American Legion Posts presented the colors; the school’s select choir sang the National Anthem; Principal T.J. Glassmeyer gave an introduction; United States Magistrate Stephanie Bowman read a statement of the court; a hearing for the petitioners was held, and the 67 guests of honor swore their allegiance to the United States.

Many of the main participants reflected on the ceremony and their roles in it:

In his introduction, Glassmeyer quoted a former president: “Franklin Roosevelt said in the truest sense, ’Freedom can not be bestowed, it must be achieved.’ All too often we forget how lucky we are to be American citizens. We take for granted the freedoms and rights that you have sacrificed so much for. I hope our students look at the freedoms you have achieved and appreciate the freedoms they have been bestowed even more. We feel incredibly lucky to have you hear today, and we appreciate you allowing us to be a part of this ceremony. Congratulations. It is truly a privilege to have you join us as American citizens.”

Later, Glassmeyer discussed the significance of the event for his school.

“I think it’s really important for the students, one, to understand how the immigration process works, how legal immigration works, and two, you know, it lets them appreciate the rights that we were given when we were born, that all of these people sacrificed and worked incredibly hard to get things that we were born with,” Glassmeyer said.

With immigration at the forefront of political discourse, and discord, Glassmeyer said the ceremony put a human face on the issue.

“They’re not scary. These are people who came to the country, and hard working, who sacrificed a great deal and who have gone through the process legally. They waited in line, they did all the correct forms, they did everything correctly, and they’re great people,” he said.

“Pretty impressive. I’m glad to see so many people come out and want to be Americans. They did it the right way and they took care of everything,” Perry said.

“I thought it was a great ceremony,” he said. “I was honored to be here. I was surprised there were 67 people from 30 different countries, so that was really an honor. Glad to see a lot of people doing it the right way.”

Three members of the Cincinnati Chapter of the Sons of the American Revolution, based in Blue Ash, were popular with people taking photos. Dressed in full period military uniforms, President Jack Bredendoerfer and members Jerry Knight and Bob Bowers graciously accommodated each request.

Bredendoerfer said his group has representatives at two to three naturalization ceremonies each month.

“Obviously, our (ancestors) helped found the country, so the country keeps renewing itself through new citizens and that’s why we help celebrate this event,” Bredendoerfer said.

“II think it’s important because our nation is built on immigrants from the very beginning, and I’m proud and inspire to see the number of people coming into our country the right way,” Bowers said.

Bowman said she has presided at close to 20 naturalization ceremonies this year – more than in previous years.

“It’s one happy thing that we get to do as judges in the federal court system. When we have them in the Courthouse it brings a lot of people into the building which is a typically quiet place, but I love doing them at schools, having the students involved, the pomp and circumstance of the flags, singing the ‘Star Spangled Banner.’ When it’s at the Courthouse, there’s no music, there’s no anything fun, so it’s great to have them at schools and we can have the students involved. This is rewarding for me to be able to be part of their stories. It brings people together,” Bowman said.

Chirra, a software engineer, moved here three years ago “for love,” she said. Her husband, also from India, had previously been naturalized.

“There’s a lot of paperwork to do, but I think it’s worth it. I’m excited, happy. Everything went smoothly and there were a lot of people who were very helpful,” Chirra said.

“The most memorable part of it … the part where the judge actually explained the responsibilities and her speech on mentioning about that and the principal said not to take the freedom lightly, like he was giving a message out, I think, those were two interesting things to be highlighted, actually.

“This actually means a lot to us because we’ll be art of one of the greatest constitutions in the world, and we actually know that we enjoy the same freedoms as other citizens of the country enjoy currently,” Kumar said. “We are looking forward to having this freedom and all of the protection and safety that the country provides, and grow together with the country.”

“The most difficult part I would say was understanding all of the immigration laws and all of the changes to it, keeping up to date around all of these current happenings, and then making sure that we are in compliance, that we are traveling accordingly, carrying all our papers, but right now with the citizenship, most of that paper burden goes away, and that makes our travel easier moving forward,” Kumar said.

“That was probably the most difficult part. The most interesting part was really, when we got it finally, and now we actually can, we don’t have to maintain dual citizenship and stay between different countries.”