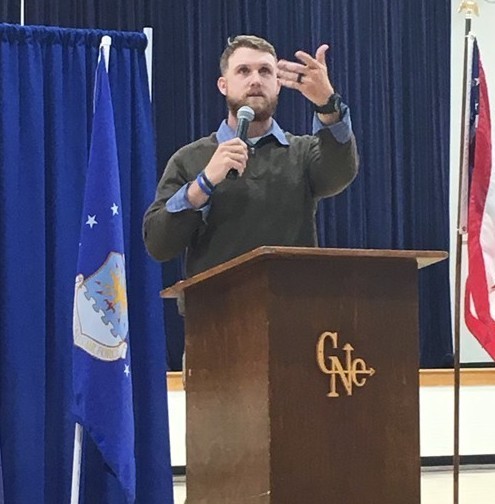 Kenneth Hubers talked about the 10,000 soldiers killed in the six hours between the signing of the World War I armistice and the official cessation of hostilities.

Brian Bailey was grateful for one who wasn’t.

They were two of the four men who spoke to Clermont Northeastern High School students Nov. 9 as the school observed Veterans Day.

Standing in front of flags representing the four branches of service, Sgt. First Class Bailey, an Army cavalry scout and recruiter and a 1998 graduate of Batavia High School, quickly and solemnly put the day in perspective, talking about the fortunes that allowed him to be there – to exist.

“My great-grandfather was in the trenches on Armistice Day, during the armistice, and, he was a machine gunner in the American trenches, and when they blew the whistle and they announced the armistice, the troops came out of the trenches and they crossed no man’s land, and they were greeting the German soldiers and what not, and a German soldier came up to my great grandfather and he said, ‘Are you the person behind this particular gun at this particular spot?’ and he said, ‘Yeah, how did you know that?’ ‘Because I was a German sniper and I had you in my sights, but we knew the armistice had been signed and that’s why I didn’t shoot.”

“Between 5 a.m. and 11 a.m., 10,900 men were killed. For political value, they didn’t end the war until 11 o’clock,” Hubers said, then taking a long pause. The 1975 Milford High School graduate, U.S. Navy retired (CPO), is commander of the Southwest Ohio VFW Memorial Team, which buries about 150 veterans a year.

Hubers served 24 years, but early in his tour wondered if he would last.

“When I first got into the service, for everybody it’s a shock, because you know you have experience military service to experience military service. Went to my first duty, it was on an aircraft carrier, and it was hard, dirty work, extremely dangerous on the deck of an aircraft carrier because of everything that’s going on. A lot of ways to get hurt or even killed or even blown over the side, and I talked to my more senior people, my mentors, cohorts, so to speak, and I asked them, tell them more or less my second thoughts, and one of the gentlemen looked at me and said, ‘There’s less honorable ways to die.’ And that has just stuck with me for the last 40 years, and that’s true, there’s less honorable ways to die than in the service of your country,” he said.

2009 CNE graduate Seth Page was a U.S. Army sergeant, serving until 2015. He directed his message specifically to “students like him” in the crowd.

“I said that I appreciate everybody coming out, especially the ones that are locked in and listening, and taking everything to heart, and then I said thanks to the ones who are here just because they’re happy to get out of class, because I’m speaking to you, because I am you. That was me. I was the one yawning. I probably had headphones on in the bleachers instead of listening, I would just be off in my own world, doing my own thing, and would probably pull bits and pieces out of it, so if I can let them know, ‘Hey, this is the message for you,’ maybe it would sink in a little deeper,” Page said.

Page, who now lives in Colerain Township, is a full-time student at Mount St. Joseph University, pursuing a bachelor’s, and then master’s, degree in special education.

Pete Miller journeyed from Catlettsburg, Kentucky, almost 125 miles from CNE, for the ceremony. An Army Specialist Fourth Class, Miller was stationed in the Demilitarized Zone in Korea from 1958 to 1959. His message was one of appreciation and respect for veterans.

“Well, one of the things, it was such an honor to serve in the military. Especially I was in Korea right after the conflict and it was just a life experience for me and I feel honored to be able to serve my country. I feel my country has given me so much and offered so much, and also it’s just a small price to pay, I believe, to serve in the military. I know today our young men are going into conflict and harm’s way, and I appreciate what they do. I appreciate their devotion to the country and to God, and it’s just an awesome responsibility and an awesome privilege,” Miller said.

He remembered how Vietnam veterans, in particular, were treated when they returned from service.

“It was so depressing. I mean, I had served in the military, this has occurred after my time, and it was just an embarrassing time in our nation that we treated those folks so poorly. I mean, it was so bad, that many of the guys that I’ve known would take their uniforms off, after they arrived on American soil, defending our country, because of the embarrassment, because of the attacks they had on them, people spit on them and cursed them, and it was just a dark day in our society and I’m so glad that we’re past that.”

The other speakers agreed that attitudes toward servicemen and servicewomen have changed for the better.

“Very positive. It’s very positive. I looked at the faces. I probably got more attention than I gave when I was in high school when we had assemblies like this,” Hubers said.

Bailey, who is the recruiter for CNE, noted that Clermont County’s strong military roots are one for the reasons for that shift.

“I think it depends on the area you’re in. If you’re up in Vermont or California or something, you may have a different experience, depending on where you’re at, but at least around here, people are respectful and they’re very patriotic, and either they want to serve or if they don’t want to serve, they’re at least very supportive of the idea of serving,” he said.

For the four speakers, the ceremony was not so much about being thanked, as it was about thanking those in attendance.

“I stand before you to thank you for allowing me the privilege to serve you for 24 years,” Hubers said.

“Thank you for thinking well of military people,” Miller said. “It really is something that we need to respect.”