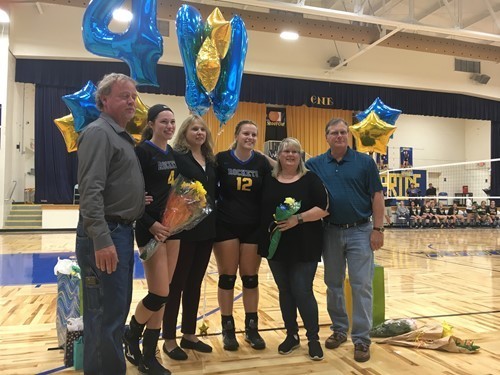 Opening Night. Homecoming. Senior Night. All at once.

The Rockets’ varsity and junior varsity volleyball teams played Southern Buckeye Athletic and Academic Conference rival Georgetown and honored senior middle blockers Jillian Kirby and Erika Gregston. Those two, along with the rest of the JV and varsity players, had endured a grueling two months which saw them travel approximately 950 miles, playing 21 straight matches on the road.

“We haven’t done anything at home. We haven’t practiced in this gym or anything. We practiced in our middle school gym, which was OK. It has a much lower ceiling and a lot less playable area, but we made it work,” coach Emma Keough said.

During a heavy rainstorm on a Friday night in June, water seeped through the roof, which was being replaced, and seeped down the walls and onto the maple floor. High school principal T.J. Glassmeyer said it took two weeks to tear up what was left and begin the replacement process.

“It hasn’t been the ideal situation for the students at all, and I feel bad for the girls that they had to play almost all of their games on the road. It’s not easy to do, but they came together, they bonded, they worked really, really hard and we’re excited that we’re able to get them in tonight,” Glassmeyer said.

As the only seniors on the team, Kirby and Gregston did their best to keep things in perspective and help turn an unfortunate situation into a positive experience.

“Coming in I was super nervous about it, because playing every game on the road, no one does that, but it’s actually been super fun for the most part,” Kirby said. “I mean the bus rides aren’t fun, just sitting there for 40 minutes for long-distance games, but overall, I mean the team’s really rallied behind everybody, and the games have been really good and a lot of parents have come out to watch us play too, so we’ve had a good support system.”

“Oh gosh, I could go on a long time I’ve said from the beginning, as terrible as I felt about this season being this way for these two, they were the best seniors for this to happen to, because those two more than any I’ve coached I knew they would handle this adversity with class and would handle it with a leadership attitude and would deal with it the best, but having those two for four years, thinking about talking about them after tonight when we have our little celebration, I don’t like thinking about it because they really mean a lot to me. Dealing with it by not dealing with it. Getting the privilege of working with two really great kids for four years is a special thing, and both of them have a very special place in my heart personally, and in the school and in the program as well,” Keough said.

Gregston credited her coach, and said Senior Night would be an emotional experience.

Kirby was fighting the emotions of the evening an hour before the ceremonies.

"Super excited … I know I’m going to cry, because like she said, we’ve been on this team for four years and it means a lot to us being here, and I’m about to cry now to think about it.”

Practicing in the smaller middle school gymnasium may have made CNE a better team.

“It taught us to be in more control. Our ball control was a lot better because we had to keep the ball out of the ceiling. I would say control over all and learning to play within space available,” Keough said.

Athletic director Dave Colwell said the entire school was affected by the disruption, and work on the arena was finished just hours before the Georgetown match, with hanging SBAAC banners and putting down mats for the team chairs.

“We had to move basketball offseason workouts, gym classes. Those were the two main kinds of highways to get through the building were the stage and the bleachers. During lunch, before school, kids used to always be in the bleachers. Those were some of the challenges. The gym was completely closed,” Colwell said.

The school also took a temporary financial hit. They did not get any gate receipts for previously scheduled home matches that had to be moved.

Colwell and Glassmeyer both said the new floor may be the best in the SBAAC. They visited the Robbins Sports Surfaces on Eastern Avenue.

“What we went with, was we wanted it to be unique to match the layout of our gym as possible, and that’s kind of what we came up with,” Colwell said

They chose a checkerboard, parquet-style design – which Colwell referred to as “Boston Square,” similar to that made famous at the old Boston Garden.

“It’s similar to what it was in the past. We wanted to, whenever we could make the floor pop, so the SBC and the Rockets, they are both outlined so you can see the floor through those,” Colwell said.

“I think we’re going to have the prettiest court in Clermont County. I mean it’s really a show piece for our students,” Glassmeyer said.

CNE defeated Georgetown in straight sets, 25-10, 25-1, 25-4, to complete a 14-7 regular season. The Rockets went 9-3 in the SBAAC National Division, finishing second behind Williamsburg. They earned the No. 5 seed n the Division III sectional tournament and began postseason play against No. 6 Madeira Tuesday, Oct. 16, at Blanchester, one of the gyms they visited twice during their travel odyssey.

Keough was optimistic her team could make school history and advance out of sectionals.

“They have great attitudes and they’re great team players. They play defense very well. I think our offense has improved as the season has gone on, and more than anything, they have a fight about them, and these two seniors right here are definitely key cogs in that, to be determined and to tell the rest of the team ‘We can do this if we just play our game and play consistently, we can advance.”