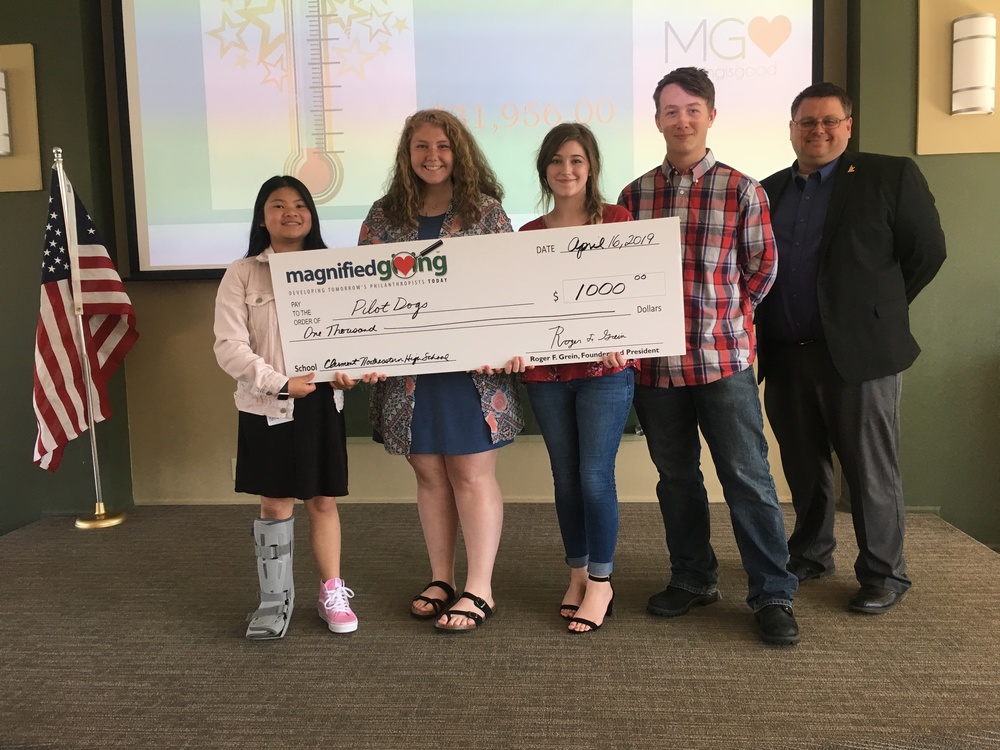 How much can six high school students do? A lot, when that effort is magnified.

Clermont Northeastern High School is participating in the Magnified Giving program, which introduces students to fundraising while benefiting philanthropies across the area. Social studies teacher Demetria Castanias is guiding the students through the process, and is learning along with them. She took over from Rhonda Campbell.

“I had never heard anything about it prior to her approaching me and explaining what it was. Luckily, before the year really gets started, they have a teacher meet-and-greet, and you can go and actually meet the head of Magnified Giving and see what the whole thing is about,” Castanias said.

“I went to the meeting in September and right away I looked for students to be involved. I knew right away that I wanted students who were going to be dedicated to this, because it’s not meant to be a teacher-driven initiative,” Castanias said.

“They give you some pointers from past teachers. Mrs. Campbell was great. She’s been awesome helping me get this whole thing started, because none of the kids from last year are in it this year, so it really is like a whole new process, all fresh faces.”

On its web site, magnifiedgiving.org, the program lists four steps toward fundraising: donors, students, teachers and non-profits. Students “follow 11 steps as they learn to meet, evaluate and choose the charity they deem most deserving.” That’s not as easy as it may seem, Castanias said.

Students eventually chose two organizations – Racing4Vets and Pilot Dogs. Racing 4Vets, based in Springdale, partners with the Veterans Administration and allows chosen veterans with post traumatic stress disorder or traumatic brain injury to recreate race vehicles (in this case, karts) and then race them. Clermont County’s long and deep involvement with veterans causes made Racing4Vets a fitting choice.

“They knew that they wanted to work with veterans right away. That was their big concern,” Castanias said.

“One of my juniors … was at a conference, and she met the company of Pilot Dogs there and that’s how she got interested in it and brought it here and the other kids loved the idea,” Castanias said.

Magnified Giving club members have spent much of the second semester immersing themselves in the program. They finalized the choice in February.

“Students have done a lot of work outside of school too, researching nonprofits on their own. I would say … at first we were meeting about once a month after school, then it was like every two weeks, and now we try to meet at least once a week, even if they come in after my plan bell, seventh period just to check on what’s going on and I check in with them,” Castanias said.

Students receive $1,000 from Magnified Giving, and then plan fundraisers and other events to increase the donations. Money raised is given to Magnified Giving, which then distributes it to the chosen organizations, with Magnified Giving matching up to $500 of the additional money raised. Clermont Northeastern students have planned a fundraiser for Friday, April 26, at City Barbeque in Eastgate.

Customers who present a coupon from CNE Magnified Giving will have 25 percent of their purchase that day designated for the club. Coupons are available through club members and the school. This is the only fundraiser planned for this year.

Schools involved in Magnified Giving participated in a check presentation April 16. CNE presented a $1,000 check to Pilot Dogs at that event, with the money raised from the City Barbeque fundraiser going to Racing4Vets.

Racing4Vets and Pilot Dogs benefit financially. The students involved – and their teacher - benefit in other tangible ways.

“They’ve learned the fundraising process and that is not an easy, simple task of ‘Let’s make a fundraiser’ because we thought of many different fundraisers and how to do them and some of them were awesome but just not feasible in our time frame, so that being said I think they’ve learned some great skills and they learned time management too in that, maybe being involved in 10 clubs is not the easiest situation,” Castanias said.

“One student in particular I had never met before, but she had heard about it, she’s a senior, she said ‘I have to be involved in this. This is what I want to do in life,’ and it’s just fascinating to see them work together. I don’t think many of them were friends going into this, they just didn’t know each other very well, and now seeing them work together, goof around and get close, and also how excited they are to come to meetings. Most kids don’t want to stay after school, they don’t want to do non-schoolwork outside of school so it’s been awesome to see that they’re actually interested in this and they want to stay after and they want to get this work done, and help out.”